The Simurgh and the Nightingale (Part 16) 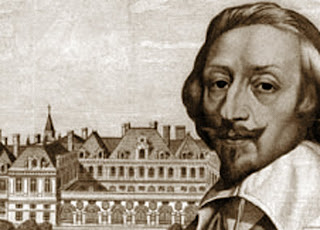 Chapter 28
Palais Cardinalle, Paris.
7th July 1637
The far corner of the room was dark for the evening light filtering through the tall windows had little chance to illuminate before being absorbed by the heavy drapes that lined the walls. On a chaise-longue tucked into the same corner a small thin man was reclining. He was reading a page taken from a sheaf of papers that lay on the floor beside him. On his lap two small kittens scurried back and forth in an endless game of chase. Occasionally his hand would stretch out to stroke their mother as she nestled close to his side. The matriarch became instantly alert however as the door at the other end of the room opened allowing her kittens to dive in beneath her for protection. Armand-Jean du Plessis, Cardinal and Duke de Richelieu - known as the Red Eminence - the 51 year-old chief minister of Louis XIII’s France stopped reading and watched as his visitor approached. The shafts of fading sunlight cast an orange glow on the rich carpet. He  retrieved one of the kittens and soothed with gentle hands its spitting defence. “Thank you for coming Pere Joseph. We have much to discuss. Would you mind lighting the lamps please?”
The visitor, dressed in the brown-hooded habit of a Capuchin monk, picked up a tinder box from the side table and after igniting a taper moved in sequence to light the candle lamps that were placed on low tables around the chaise-longue. Pere Joseph was a heavily built man with small, piercing eyes surrounded by swollen lids and a sallow face. His ragged grey-red beard protruded through the hood. He wore little ornamentation apart from a small dagger and a set of rosary beads tucked into the double wrapped hemp waist cord. Once the gloom had lifted he sat on a chair that was placed beside a small table in front of the nearest window. Outside, in the gardens of the old Hotel Rambouillet, Pere Joseph could hear the faint laughter of what he imagined to be courtiers and courtesans catching the final embers of the day. They would soon fade as the Palais gates were locked for the night. He sat down and placed a ledger in front of him and turned to face the Cardinal. “It has been a busy day, Your Eminence. Where shall we start?”
Richelieu swung his legs out and sat up to look directly at his visitor. Although having worked since dawn with only small rest periods - imposed on him by his niece Mme d’Aiguillon for the little food he consented to partake of - his mind was completely alert. “Tell me first of the Parliament.”
Pere Joseph to all intents and purposes worked as the Cardinal’s Foreign Secretary but was used to dealing with matters closer to home that were particularly dear to Richelieu’s heart. “The Judges of the Parliament of Paris have finally obeyed and registered your Letters Patent of 1635 establishing the French Academy. One of the august judges, however, was overheard to remark that ‘he thought that the time wasted to date on the matter could only be compared with the deliberations of the Roman Senate on the proper sauce for a turbot’. Shall I have him censured?”
The Cardinal smiled. “Yes. Make him a member of the Forty. Now what of the King’s mistress?”
The monk blushed slightly. “Mademoiselle de la Fayette has finally entered the Convent of the Visitation.”
Richelieu made a note in a journal that he pulled from beneath the cushion he had been resting on. “A good riddance. I must be more careful in the companions that I choose for His Majesty in future.”
One of the kittens was brave enough to venture forth and was playing with the hem of Pere Joseph’s habit. He tried to gently push it away with his foot but desisted when he saw Richelieu’s disapproving frown. He returned to his report. “On the matter of de Cesy’s recent communiqué from Constantinople. I have had a discussion with the Austrian ambassador and we have both agreed that it would be prudent to dispatch the Patriarch Loukaris. They, the Austrians, have agreed to arrange the plot but I understand that a good deal of money might be required. I need your approval to dispatch these funds to de Cesy.”
Pere Joseph handed a sheet of paper to the Cardinal who after a quick appraisal nodded his assent and attached his seal. Richelieu then moved onto the next item. “Have you heard anything more of these supposed secret Scrolls?”
Pere Joseph continued to be distracted by the kitten. “Sorry Your Eminence . . . No. Although it is rumoured that the Duchesse de Cheuveuse has some knowledge concerning their whereabouts and has been in communication with both the English and the Venetians.”
Richelieu stood up and walking to the window leant down and retrieved the kitten from beneath the Capuchin’s habit. He brought it across the room to an ornate, gilded, hardwood side-table that stood against the opposite wall. Here a small silver bowel of milk had been left. His voice was harsh as he spoke and the kitten tried to scurry away, “That traitorous bitch. I should have killed her when I had the opportunity. Instruct de Cesy to proceed with all haste and try to find out more of these Scrolls.”
As usual, the two men’s evening discussion lasted for a couple of hours before the Capuchin monk was able to retire to say his office. For him sleep came quickly although he knew that the Cardinal would still be pacing the floor of his apartment - at the far end of the building - for many hours yet.
Chapter 29
Castel Gondolfo, Colli Albani, Italy.
11th August 1637