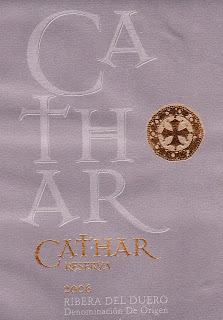 Rihla (The Journey) – was the short title of a 14th Century (1355CE) book written in Fez by the Islamic legal scholar Ibn Jazayy al-Kalbi of Granada who recorded and then transcribed the dictated travelogue of the Tangerian Ibn Battuta. The book’s full title was A Gift to Those who Contemplate the Wonders of Cities and the Marvels of Travelling and somehow the title of Ibn Jazayy's book captures the ethos of many of the city and country journeys I have been lucky to take in past years.

This rihla is about the Cathar region in Languedoc, France.

Four years ago I returned to university to pursue a master’s degree (LLM) in International Human Rights Law, at the Irish Centre for Human Rights, in NUI, Galway on a part-time basis. The subject for my thesis was Torture and in particular the work of the Special Rapporteurs on Torture.

Torture is the violation par excellence of the physical and mental integrity in their indissoluble interdependence – of the individual human being.

Defined in its broadest sense torture is the intentional infliction of severe physical or psychological pain on another human being to the extent that the victim is dehumanised. Political or public torture, torture sub specie civitatis, either legislated for or sanctioned by the state and carried out or mandated by an agent or agents of the state (including the judiciary) has a long history.

In the classical Greek era rational scientific thought had helped evolve the notion of justice or dikaiosyné – after diké, the coercive enforceability of divine decrees – as a distinctly human, albeit abstract moral principle. In the early polis, or Greek city-states, individual virtue was directly linked to the common good and citizen and state were perceived as one. Torture, as part of the legislative process, was accepted as a necessary instrument for the protection of the individual and hence the collective. Its application, however, was highly selective. Slaves were not considered to have an individual moral worth and around the time that written testimony began to be used in courts, circa 380BCE., Aristotle included in his Rhetoric five sorts of documents that could be submitted for arbitration: laws, testimony of witnesses, contracts, basanoi and oaths.

Basanoi – derived from the Greek word for the tools that were used to determine the purity or “truth” of gold – were the permitted testimony obtained from slaves under torture concerning information demanded of their masters. Citizens could not be tortured and the basanos was generally reserved for the resolution of private disputes.

In Roman law, during the early Republic (circa 450BCE), freemen were never tortured and in keeping with Greek precedence Rome reserved quaestio only for slaves. In the beginning there were clear guidelines: slaves could only be tortured to prove the guilt of their own masters in cases of incestus – which was a crime against the gods – or where the senate made a specific judicial exception in some special instances. By 60BCE however political expediency determined that slaves could be tortured to bear witness against their masters in cases of majestas and by the time of the Emperors this authority was extended, in similar assaults on the state, to all freemen and citizens. 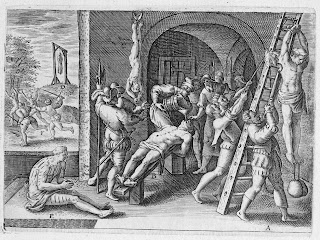 With the advent of Christianity some of the great early writers of the Church began to question the excesses of the application of judicial torture under Roman law. St. Augustine of Hippo in particular, writing around 420CE, was especially scathing of secular judges:

'What shall I say of torture applied to the accused himself? He is tortured to discover whether he is guilty, so that, though innocent, he suffers most undoubted punishment for crime that is still doubtful, not because it is proved that he committed it, but because it is not ascertained that he did not commit it. Thus the ignorance of the judge frequently involves an innocent person in suffering.'

Pope Gregory the Great confirmed this reasoning around 600 CE and to all intents and purposes, political torture in Europe ceased until the early middle ages.

This was to change again. In 1184 Pope Lucius III established Episcopal Inquisitions to counteract heresy in particular Catharism. 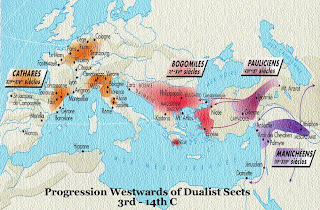 The Cathars were a dualist sect whose spiritual leaders or Perfects considered themselves the ‘Pure Ones’ or katharos, particularly when contrasted to the abuses conducted and condoned by the Catholic clerical establishment of the time. They best established themselves at all levels of society in the Languedoc region of France from about 1100CE causing enough consternation to have the Church send in their best preachers such as St Bernard of Clairvaux and St Dominic to try and counteract it. This approached failed and in 1208 Pope Innocent III launched the Albigensian crusade to rid the Languedoc region of the Cathar heretics.

In parallel to the military campaign although Innocent III had precluded torture the Episocopal Inquisitors were given more and more power and in 1231 Pope Gregory IX expanded their remit and formally established the Papal Inquisition as a professional, accountable institution dedicated to the eradication of heresy. The Inquisition’s control was placed in the hands of the Order of Preachers, the order established by St Dominic and later to be known as the Dominican Order, and they took to their work with so much relish that they were sometimes known as Domini canes, the Hounds of God. 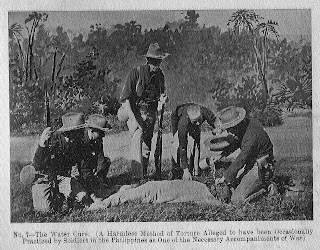 Sometime later, in uncomfortable parallels of today’s US sanctioning of water-boarding as a justifiable ‘form’ of legal torture, fundamentalist paranoia and imperial ambition, in a Papal decree that was going to determine the relationship between penitents and a punitive church for 400 years, Pope Innocent IV, in his Bull ad extirpanda of 1252, formally permitted the re-introduction of torture as a legal means of enforcing confession from supposed heretics.

This facilitation was to plant deep roots in most countries legal regimes and it was not until the 1740’s on mainland Europe that the influential writings of Montesquieu and Cesare Bonesana in particular, began the process that culminated in the 1984 UN Convention against Torture and Other Cruel, Inhuman or Degrading Treatment or Punishment (CAT).

The Cathar supression had always fascinated me, as my mother had been a lay member of the Dominican order, and while she was alive I had often teased her about the Order’s historical predilection for torture. In late September 2008 I had 10 days holiday available to me and decided on the spur of the moment to head for Cathar country, just to experience the geography and in particular some of the mountain-top fortresses where they took refuge before ultimate extinction at the hands of the crusading barons, as well as completing my thesis. 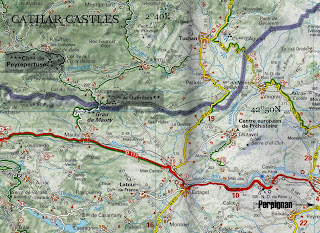 The Cathar ‘heresy’ suppression became essentially a side-show in powerful fight between Aragon, the Papacy and France for control of the resources and riches of the previously independent Languedoc region and as I climbed the heights of the castles of Peyrepertuse and Quéribus (the last significant Cathar refuge to fall in 1255) and looked out over the rich valleys and high hills towards the present-day Spanish border you could understand why. 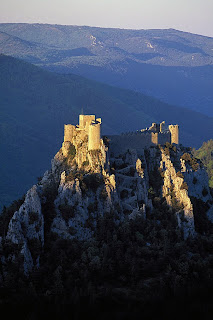 The small villages passed on the way were very quiet, secretive almost and the walls of mountain guest-houses’ paper-thin. Nights were spent suppressing coughs and evil thoughts and waiting for the mating games to end. I tried not to think of one of the last of the ‘Perfects’ Guillaume Bélibaste in 1313 being discovered having sex with Raymonde by her sister Blanche. Sex for Prefects was an absolute no-no and indeed the eating of meat of any animal or fowl that indulged in any kind of sexual intercourse was prohibited. Blanche exclaimed on disturbing the couple’

‘Oh Madam-the-misbegotten-bitch, you have compromised the entire cause of our holy church.’ 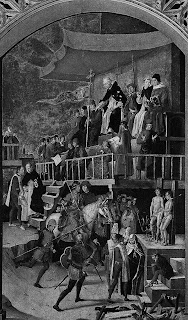 Auto de fe
Bélibaste was to die in an auto de fe in 1321, a ‘saint’ because he refused to recant before the Inquisition

It was not all ‘Pure’ for me however and in the village of Duilhac below Peyrepertuse I experienced for the very first time a very French peppered and conjugal lamb rack covered, drowned almost, in a chocolate sauce washed down with a Spanish wine called Cathar. The chef was young northern culinary crusader who had married into a family who had an ingrained memory of the Languedoc of old.

Returning from the hills to the costal motorway I travelled on towards Arles stopping to visit the abbey-church at St Gilles, the titular seat of the powerful Raymond VI Count of Toulouse who had tried to mollify the crusade against the Cathars, and nearby which on the road to Arles the murder of the Papal Legate in 1208 by a member of Raymond’s retinue, had precipitated the call by Innocent III for the crusade against the Cathars in the first place. 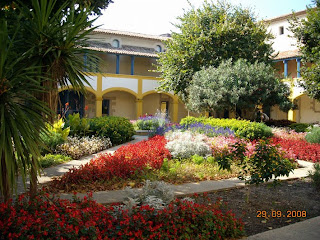 The Hospital in Arles

In Arles one of the places I found most fascinating was the hospital with yellow and blue hues where in December 1888 Vincent van Gogh was admitted after cutting off a part of his left ear in a brothel. It was the first physical manifestation of an increasing paranoia, which eventually resulted in his suicide on 27 July 1890, two years later. Of this time he wrote,

"Sometimes moods of indescribable anguish, sometimes moments when the veil of time and fatality of circumstances seemed to be torn apart for an instant."

Catharsis in Aristotlean terms was the emotional release experienced at the conclusion of a tragedy, a purging. In medicine it is an evacuation of the bowels. In modern psychoanalytical terms it is considered the process of experiencing the emotional release from discussing a repressed or ignored event from the past. 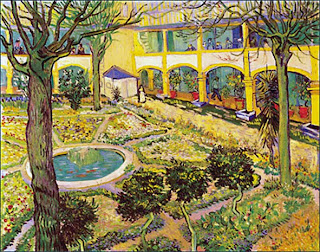 As I sat in the garden of the hospital in Arles, at the end of my journey from Cathar to catharsis, I could only imagine the inner and outer torture that van Gogh and the other ‘Perfects’ had had to experience for the sake of their inner beliefs, deluded or not. 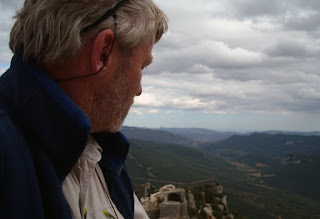 Horizons beyond Peyrepertuse
Posted by Roger Derham at Tuesday, January 11, 2011