The Simurgh and the Nightingale (Part 19) 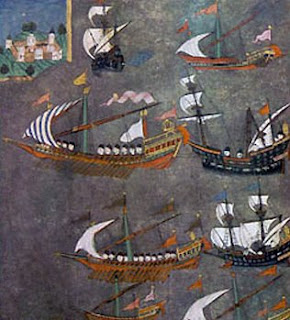 The sea was calm and Bitchnin’s galley could make good speed. It was a Reale with 30 rowing stations on each side set-up a scaloccio with six slaves chained to each oar. The slave oarsmen were positioned in such a way that four were pulling and two were pushing the enormous fiols. Ali Bitchnin gave a smile of satisfaction as he stood near the rudder post. He had always preferred the single, large, a scaloccio oar to the complicated alla zenzile set-up where there were three oars of different size at each station. Slave rowers adapted easier to the manoeuvres of the single oar although the effort required was still torturous. He could see that despite the previous winter’s heavy work hauling stone to repair the mole in Algiers all of the slaves were showing the immense strain involved on their faces. Like him they wished for a favourable wind to rise to ease their burden for the time being there was no sign of this. The sails on the lateen rigs of the galley’s two forward masts remained unfurled. Behind the Reale twelve other galleys of various sizes followed in their wake. All displayed the colours of the Algiers fleet.
Djivo stood on the fore-castle, leaning against the rigging of the forward mast. He was looking at the fast approaching harbour of Valona, directly ahead of them. He was in familiar waters again and he shivered as the realisation sunk in. 'So close to Ragusa and yet so far,' Djivo murmured as he turned to look back at the banks of straining oarsmen. He could still recognise some of the men who had been captured with him off Cape Falcon - seven years earlier - but had learnt to avoid their envious stares. On his return to Algiers from his work on the aqueduct in Constantine he had joined Bitchnin’s fleet which was departing to rendezvous with the annual assembly of the Kapudan Pasha’s fleet. This summer the rendezvous was to be at Coron in the southern Pelopenese with their eventual mission to transport soldiers and provisions to the Sultan's army which was besieging Crete. By departing early Bitchnin had decided to do some raiding of his own in Dalmatia, for profit first.
After leaving Algiers the galleys had sailed for Bizerte in Tunisia and from there made the long dash to the coast of Puglia. Finally making landfall about ten miles south of Bari, Bitchnin and his company of marines from the ta’ifat al rusa had raided inland to the small cathedral town of Noicattaro where in the absence of much booty had made sport by raping the convent nuns. Bitchnin had rationalised these actions to Djivo by saying that the nuns had prostituted their lust and he had done them a favour. His mood was foul however as there had been little profit in the raid, and he had angrily ordered their departure to spend a week cruising the Puglian coast in search of merchant vessels with even less luck. By then the men were spent with the effort and turning east they had docked in Ulcinj in Albania where they had replenished their supplies.
The respite had been brief. As the time for the assembly of the Sultan’s fleet drew ever closer Bitchnin drove his tired oarsmen for one more raiding cruise northwards along the Dalmatian coast before returning south to make for Valona where Bitchnin had planned a three day lay-over. After this he planned to sail the final leg to Coron. It was this raid northwards that had brought Djivo so close to Ragusa. He thought of Catherine constantly. The two or three letters of hers that had arrived from Constantinople in Constantine were invariably a season old and had to be first routed through Bitchnin’s bano in Algiers. They had devised a secret code for their exchanges as he did not want anyone to know of his whereabouts. He had not even risked trying to inform his family.
Djivo's thoughts were interrupted by barked commands and the galley banking sharply to round the island of Saseno and make directly for the port of Valona. The wind was beginning to rise and its direction from the east was whipping up the sea. Their speed dropped further as the galley battled into both wind and sea. At the same moment there were loud shouts from the look-outs aloft. From around the north-western cape of the outer bay there had suddenly appeared a great number of sails moving at speed. It was not long before Djivo could make out the huge ensigns of a Venetian war fleet. He could make out three frigates, four galleasses and seven galleys straining on wind and oar to close the gap between them. Being outnumbered by size and firepower Bitchnin ordered four of his galleys to stand station to slow down the Venetians while he and the others attempted to make the inner harbour. 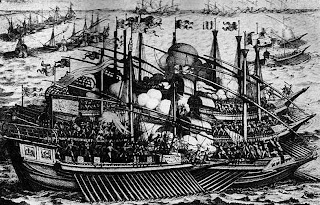