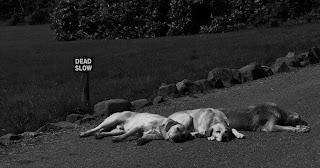 Dead Slow is a nautical term used to indicate the very slowest a ship or boat progresses forward or backwards (ahead or astern) without actually stopping. The derivation and usage is as old as the earliest shipping along the coasts of the Mediterranean, perhaps even as early as 3500 B.C.E.
Most shipping in antiquity was entirely intimate to the coastline and the distance travelled depended on the winds and the manpower energy capable of being expended. When a galley entered the estuary of a river discharging into the sea the freshwater often formed a layer, without mixing, over the denser saltwater below. This type of water was known as ‘dead water’ because it was very difficult to maintain momentum and speeds would slow to a ‘dead slow’ pace. The term remains in usage today and in modern shipping terms equates to about 6 knots speed. 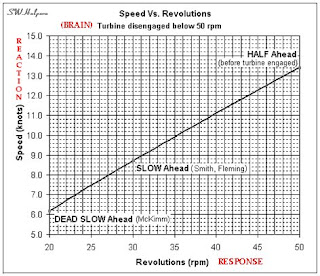 The term could equally and as aptly be applied to the tidal flows of human emotions. There are moments in our lives when a sudden surge of ‘freshwater’ stimulus creates an unmixed layer above the ‘saltwater’ and understood density of normality, of daily existence. Unexpectedly, for a little time, instead of speeding up your responses, your desires slow to a stop, unable to maintain momentum, unable to comprehend what is happening. Then the ‘dead water’ clears, purchase is regained, a way is found and often you speed up to regain lost time. 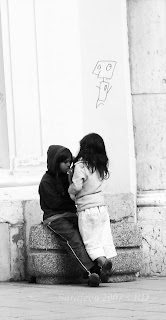 When a ship or person is at ‘dead slow’ they are at their most vulnerable.
Pirates of the sea and the soul know this is the moment to strike.
Posted by Roger Derham at Friday, September 04, 2009

I came acroos your blog by absolute
chance..what are the odds..
I liked your contract,somehow it remindes me of the two english poems by J.L Borges,if not mistaken,one of your favorite authors,and Eco and Cortazar..taste
shared.
find it difficult to read your posts,they go too fast.at least for me.
Like a stolen smile,you´ve had got yourself,one today...