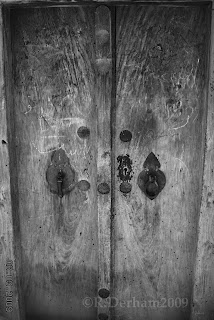 On the 27th September 2009 the Iranian Government sold a majority stake in the Telecommunications Company of Iran (TCI) to a consortium comprising Tose’e Etemad (46%), Shahriar Mahestan (8%) and Mobin Electronic Development Company (46%) for $7.9billion (20% immediately and the remaining 80% over 8 years with interest). There has been some disquiet expressed about the nature of the bidding process (Mobin is a private joint stock company one of whose directors, Younes Bakhshmandi was deputy chairman of TCI) but also accusations of collusion between the consortium and the Sepāh e Pāsdārān e Enqelāb e Eslāmi or the Army of the Guardians of the Islamic Revolution (IRG or IRGC). 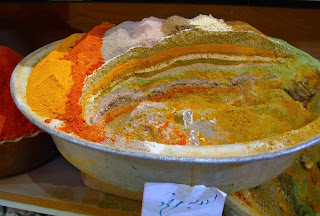 A spice-bowel in the market in Yazd, Iran.
The many layers of Iranian society

The IRGC dominates the huge military-economic nexus that now exists in Iran and has established multiple commercial companies to exert and maintain this control at a boardroom level, a strangulation if differing in tactics does not differ in intent from the brutal strong-arm thuggery employed by the IRGC ‘company workers’ against protesting citizen ‘dissident stakeholders’ on the streets of Iran in recent times. The IRGC is currently commanded by Major General Mohammad Ali Jafari, originally from Yazd.
I find the IRGC’s cynical pragmatism both fascinating and depressing. It is one of Iran’s main contentions that the rapacious greed and interests of the large players are driving American involvement in the Middle East and points to the USA’s military-economic nexus political involvement in companies such as Halliburton (Dick Cheney was CEO from 1995 to 2000). There is some truth in this and President Ahmadinejad has been vociferous in his condemnation of these interests and predicted the demise of their influence. He stated in 2008 in a speech the UN that:
"The American empire in the world is reaching the end of its road, and its next rulers must limit their interference to their own borders."
And yet Iran is supporting a similar development of a powerful military-economic self-interest block. Is this of concern?
I am not, nor do I pretend to be, a political analyst but obviously, to any sane observer, control of the major telecommunication delivery networks allows inherent suppression and censorship but equally facilitates the transfer of political power, or the taking of it. And with this latest acquisition this is a distinct possibility in Iran. If the analysts are right and the successful consortium is linked to the Jafari-controlled IRGC then it is just a question of time. The theocracy is waning, its lifeblood, a dependence on popular support for its religion-based policies and a distaste for the demands of Mammon, spilling. And in the wings is an electronically savvy Mammon dressed in Kevlar patiently waiting to take control. And a return to a military dictatorship. And the days of the Shah? 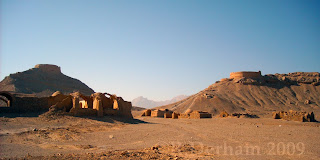 The Zoroastrian Towers of Silence, Yazd, Iran
A redundant history?
I am not alone in this assessment. Recently I heard a radio interview with Bruce Bueno de Mesquita. He is the arch proponent of 'game theory' when applied to political developments and it was quite depressing to listen to him. He has no time for the conscious impact, for what I would have imagined to be important such as informative past historical input i.e. previous civilizations and regimes’ mistakes, successes, achievements etc. In de Mesquita’s assessment and game theory application past history is entirely redundant and really serves only to act as a validation of his predictions. Those predictions are entirely based on the self-interest of the ‘now’, the ‘players’ involved having no past just a present and a future. He has predicted that over the next four years, the theocracy and Ahmadinejad will be marginalized and that Jafari’s IRGC is the future, and will become along with the Bonyads (charitable trusts that control 20% of Iran's GDP) the major players in Iranian politics. 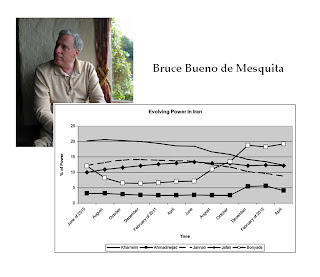 de Mesquita's 'game theory' prediction for regime change in Iran
Don’t call us, we’ll call you when the next revolution comes. And we’ll use your telephone credits to boot! And boot we will!
Posted by Roger Derham at Saturday, November 07, 2009