Trucial Troubles – The Sheikhs are Sitting 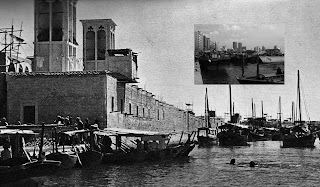 Dubai Creek 1946 and 2006.
The Wind Towers of yore replaced by the Air-conditioned towers of now.
John, my neighbour, committed suicide earlier this year, driven to despair by the failure of his property investment in Dubai, it was a tragic portent of the now general implosion of the ‘fantasia’ that exists there with both Dubai World and the private investment arm of the ruling al-Maktoum’s family seeking delay on the repayment of 40-70 billion dollars worth of debt.
When Wilfred Thesiger travelled throughout the southern Arabian peninsula in the 1940’s he was a guest of Sheikh Zayid bin Sultan Al Nahyan the future iconic ruler of Abu Dhabi and from 1971 of the United Arab Emirates, at the oasis town of Al Ain/Buraimi. In the mornings a servant would come and inform Thesiger that Sheikh Zayid was ‘sitting’ or in audience, receiving visitors and resolving disputes. At the time the disputes centered mainly around the camel stealing activities of the tribe of the Bani Kitab, and indeed much time was spent adjudicating on the relative merits of the batina, banat farha, or banat al hamra breeds of camels as to whether they were worth stealing back or not.
Times, if not the economic importance of appropriate decision making, have changed on the Trucial Coast. The Sheikhs of the Emirates are now going to have to decide how or whether they will, or can, bail out the enormous debt that Dubai World and the Al Maktouum ruling family investment vehicles have wracked up. Abu Dhabi controls most of the oil wealth and given disputes between the al-falasi – to which the al Maktoums of Dubai belong – and the al-falahi – to which the al-Nahayn of Abu Dhabi belong – sections of the Bani Yas tribe that resulted in a war in 1947 and continued after the amalgamation in 1971 it is uncertain whether Abu Dhabi will be rushing into help. I suspect ‘sitting’ will be the only action we will see, until any settlement extracted fully satisfies an al-falahi sense of superiority.
The UAE is a federation of seven states that has its origin in the General Peace Treaty that Great Britain entered into with 12 signatory sheikhs in January 1820 in order to suppress piracy on this part of the Arabian penninsula that was then known as the Pirate Coast. The initial treaty was further supplemented by the Maritime Truce of 1835 and the Perpetual Maritime Truce of 1853, when additional efforts were made to suppress slavery, and finally the 1892 treaty. After the United Kingdom withdrew its protectorate status in 1971 Bahrain and Qatar went their separate ways and six of the emirates (Abu Dhabi, Dubai, Sharjah, Ajman, Umm al-Quwain, and Fujairah) formed the UAE in December 1971 (to be joined later by Ras al-Khaimah – the pirate state that originally precipitated the Royal Navy reprisals and the 1820 Treaty – in 1972)
Of interest in the original treaty Great Britain insisted that the signatory sheikhdoms should include in their maritime flags the colour white to show that they were allies:
"In the name of God, the merciful, the compassionate! Praise be to God, who hath ordained peace to be a blessing to his creatures! There is established a lasting peace between the British Government and the Arab tribes, who are parties to the contract, on the following conditions:
Art. 3. The friendly Arabs shall carry, by land and by sea, a red flag, with or without letters in it, at their option; and this shall be in a border of white, the breadth of the white in the border being equal to the breadth of the red, as represented in the margin, the whole forming the flag known in the British Navy by the title of 'White pierced Red'; and this shall be the flag of the friendly Arabs, and they shall use it, and no other."
All of the current individual emirati flags as well as the federation flag still include the ‘white’ demand.
John, my neighbour’s tragic involvement was not the first from the west of Ireland. Indeed the history of the transition from a camel-stealing, and pirate-raiding based economy to the excess of now was precipitated in the main by the oil and gas exploration licences granted to the D’Arcy Exploration Company by the Sheikh of Abu Dhabi in 1931. William Knox D’Arcy was the son of an Irish solicitor from the D’Arcy family of Gorteen, Co. Mayo. He made his first fortune in Austalian gold and then nearly exhausted this fortune exploring for oil in Persia. The D’Arcy Exploration Company on its last financial legs found oil just in time in May 1908. The Anglo-Persian Oil company was formed with D’Arcy Exploration and was then later incorporated into what became British Petroleum. Knox D’Arcy had made his second fortune and died in 1917, not that well liked. His first wife Ella, whom he had divorced, contributed, with Kipling, Conan Doyle and others, a short story called Irremediable to an 1893 book called Victorian Short Stories of Troubled Marriages.
D’Arcy Exploration went on however. In March 1955, D'Arcy Exploration Limited building on the 1931 concessions was granted "the sole and exclusive right to explore for, drill for, develop, product, transport and dispose of oil within an area of the seabed and subsoil lying beneath the high seas of the Arabian Gulf contiguous to the territorial waters of Abu Dhabi, and which had been proclaimed on the 10th of June 1949 to fall within the jurisdiction of the Ruler of Abu Dhabi". The total area of the Concession was 30,370 square kilometers and had a validity of 65 years. The first large offshore oil field was found at Umm Shaif in 1959. 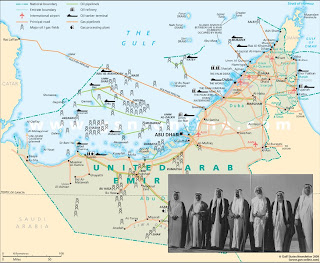 Trucial Oil and the Original UAE Emirs
Oil and gas began to flow, and in the slipstream, fantastic prosperity, development and air-conditioned and desalinated greed. The hopes of individuals and investors destroyed, lured by the bright-light ‘opportunities’ that we as a society are continuously attracted to. And now in the UAE there is an enormous economic vacuum and in that dangerous vacuum will flower a resurgence of angry anti-western Islamic al-Qaeda fundamentalist opposition.
The Sheikhs are not sitting they are sh**ing! 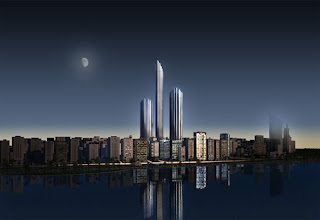