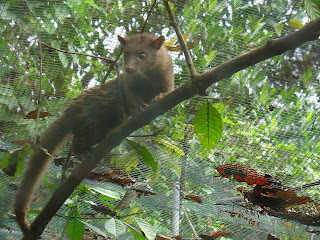 A Civet at The Lodge

Caught in a cloudburst from the leading edge of tropical cyclone Ului on Australia's Gold Coast there is a little time available to me to reflect on Australia and the changes evident since we lived here twenty years ago.
The economy unlike in Ireland and Europe is booming. Unemployment somewhere about 5.8%, house prices soaring, job vacancies across all sectors occupying oceans of newsprint and ... expensive for the visitor. The Australian dollar is strong and it reflects a vast mineral wealth and the concerted effort, twenty to thirty years ago, to swing Australia's economic orientation away from west to east.
Some things don't change however. In particular the very Australian way of using descriptive nouns.
In every day language and print but particularly within the political sphere their use falls somewhere between disdain and defammatory.
Take for example the recent visit of President Susilo Bambang Yudhoyono to Australia.
Apart from waiting until desert during the State Banquet to gleefully announce the very recent killing "execution" of a wanted terrorist ( Australia in recent days has just passed legislation banning for ever in all terrotories capital punishment and torture) Yudhoyono brought as a present to Prime Minister Rudd (apart from the metaphorical head of the Bali bomber who had been trailed by police for sometime but 'conveniently' was only killed to coincide with the visit of SBY to Australia) a gift of rare luwak coffee.
Now kopi luwak coffee is made from the extracted beans found in the excrement of Asian civets. The political commentators could not contain themselves. Laurie Oaks however, in the best of 'keatingesque' barbs, was to announce the gift as 'A new treat at the Lodge: crapuccino!'
Brilliant! Hubris mud-slinging and froth in one mouthful.
Ah the rain has stopped. Time to move again.
Posted by Roger Derham at Sunday, March 14, 2010