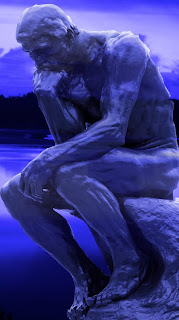 Jack, the last of his Christmas cigars in hand, reaches up to touch the skylight window. He ponders on the dead space between its layers... and the insulation of life in general. The Danish glassmaker’s trademark is etched high in one corner and after sucking hard on the cigar he blows a blue smoke-ring in that direction. In the background Coltrane plays. Exhalation music, he thinks.
Outside the window, towards the end of a brittle-clear January day, a twilight haze, the colour of indigo-blue, has precipitated. The colour of frozen skin, barely alive, he thinks, remembering the touch of her cheek when they first met at a New Year’s party; twenty years ago today he remembers.
She had asked him some time later, ‘What is it you really want from me, Jack?’
Nose against the cold glass he thought back to the first time they had slept together… stayed together. Sometime in the night he had woken up. He could still smell the scent of her yet knew she was already gone. Like a death her side of the bed was already cold, and his true sense of her had evaporated. He had lifted himself up on one elbow and scanned the room. She was standing in the doorway, in silhouette, naked with her long and ever so sensuous back to him, her right shoulder leaning against the frame and left leg stretched out like a ballerina, tracing imaginary shapes on the floor with her toes. On many occasions since then he wondered why she had stayed with him.
‘In my dreams, I dream only of you!’ He had replied; the words back then, so quietly said, had been barely a thrill of his lips. Dreams are but insulation between the layers of rational and irrational thought, he thinks. And he had many, he remembers. He traces her name in the condensation his breath had made with his finger.
‘Jack! Where are you?’ a voice calls.
‘Up here,’ he answers, rubbing out the name on the glass. ‘Looking at the sky.’
‘It’s a nice sky,’ she says as she climbed the retractable stairs and stood beside him.
‘Woad, the colour of despondency,’ he says.
‘What?’ she asks, pulling away a little to look at him.
‘I was imagining Viking longboats sailing up the inlet out of the haze and the purple or indigo-blue woad pigment that would have covered the warriors’ skin. The last colour many people saw before being rendered by savagery.’
‘Just the men, Jack! Many women would have survived,’ she laughed, touching him gently on the face.
‘Yeah,’ he laughs back. ‘But only the seeded ones.’
There is an awkward silence. She breaks it.
‘How are things today?’ she asks quietly.
‘A bit better,’ he replies, a bit too defensively. ‘It no longer feels like a hot poker up my ass,’ he adds, willing the radioactive iodine-blue seeds planted deep in his prostate well in their work. They had switched to twin beds for the time being. He did not want to contaminate her, not sure if he would or could inseminate…again.
‘Good,’ she says. ‘Your dinner is ready. Come on down.’
And she was gone...into the haze.
A Man Thing 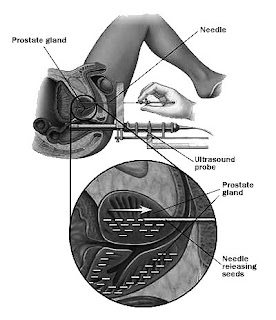 About 1 in 7 Irish men in their lifetime will develop prostate cancer. It has a greater incidence than female breast cancer yet no national screening programme or management protocol exists. This is by in large the fault of men. Instead of fighting for an equivalent status to breast cancer services they have backed off, embarrassed, afraid, introspective. Accurate screening is available, in a relatively low cost base combination of PSA (Prostate Specific Antigen) and prostate ultrasound. Treatment modalities and protocols including the implantation of either radioactive palladium or iodine seeds in appropriate cases has markedly reduced morbidity and mortality associated with the cancer.

We men need to become far more vocal and proactive in demanding an integrated national program.