Communication:
Old and New in Afghanistan

On June 13, 2010 the New York Times reported that the United States Geological Survey working with the Pentagon (and presumably their drone aircraft) had near-completed a massive geological survey of the mineral riches of Afghanistan and had discovered huge untapped deposits of rare but highly valuable minerals particularly lithium. 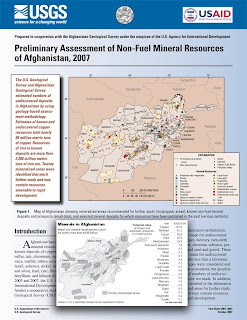 Despite General Stanley McChrystal’s Paton-like pushing of a Rolling Stone self-destruct button in his criticism of the American civil administration, that administration is determined to win the war, then win the peace and then exploit Afghanistan for any of the riches it might contain.

I find this utterly fascinating. 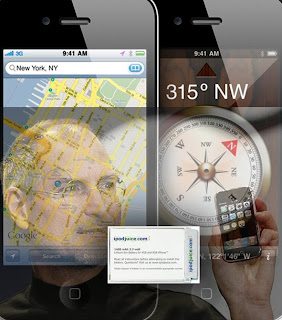 It is now likely that the progressive development of the primary form of future communication in our world (iPhone 4’s and their ilk) between people, communities, combatants, peacekeepers, terrorists, politicians, charlatans and exploiters will depend on power provided by the lithium ions of Afghanistan.
This ‘New’ style of communication, this new pervasion of an ‘Indo-European’ lithium-powered techno-language, is however just another evolutionary stage of the ‘Proto-Indo-European’ language of our distant ancestors that was first enabled by another Afghan rare mineral: lapis lazuli.
When the last glacial stage of the last small ice age retreated from the Hindu Kush plateau about 10,000 years ago it allowed people from the lowlands to move up along the rivers to hunt in high valleys such as the Kokcha Valley in North-Eastern Afghanistan. The glacial retreat also exposed in the steep valley walls intense blue rock formations know known as lapis lazuli. The small Kokcha River is the eastern tributary of the River Oxus which Marco Polo traversed and wrote: “There is a mountain in that region where the finest azure in the world is found. It appears in veins like silver streaks.”
The hunters, let us call them the Nuristani people, found that instead of hunting animals for their pelts the blue rock if prised, polished and brought to the lowlands was considered more valuable and tradable. Intensive mining for lapis lazuli began in the Kokcha Valley about 8,000 years ago and has continued to this day.
The extraordinary aspect of this mining is that from 6,000 BCE there were well established trade routes bringing the lapis lazuli into the Indus Valley Civilization sites and into Sumer, where as a precious stone it features highly in the Epic of Gilgamesh. It also appears further afield in the pre-dynastic tombs of 3,500 BCE Egypt and after a lacunae (presumably caused by Mesopotamian control of all the mining output) in the Ist to IVth Pharonic dynasties becomes a very important part of Egyptian jewellery design from about 2500 BCE on. 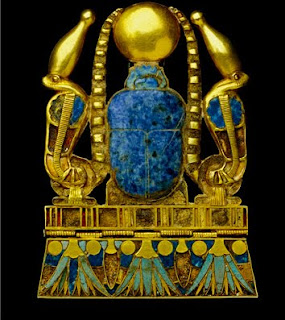 Lapis Lazuli in Egyptian Jewel
There other intriguing aspect of the development of a specific communication network for the trading of lapis lazuli is that there would have to have been a parallel development in the language of that trading. I have long felt that the true origin of the ‘mother’ proto-indo-european language, that has given us Tocharian, Greek, Latin, Irish, English etc (and more recently ‘texting’ or techno-language) was also amongst the original Nuristani miners in the high Kokcha valley of Afghanistan.
Later lapis lazuli was also to become, when ground, a pigment called Ultramarine, and was used in the production of some of the greatest of the early medieval illuminated manuscripts such as the Book of Kells. 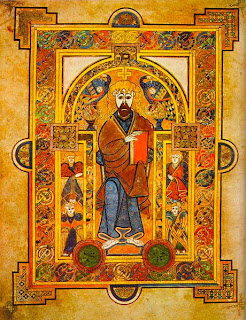 Lapis Lazuli Ultramarine Blue in Book of Kells
Yeats much later again wrote one of his greatest poems:
Lapis Lazuli

I have heard that hysterical women say
They are sick of the palette and fiddle-bow.
Of poets that are always gay,
For everybody knows or else should know
That if nothing drastic is done
Aeroplane and Zeppelin will come out.
Pitch like King Billy bomb-balls in
Until the town lie beaten flat.
All perform their tragic play,
There struts Hamlet, there is Lear,
That's Ophelia, that Cordelia;
Yet they, should the last scene be there,
The great stage curtain about to drop,
If worthy their prominent part in the play,
Do not break up their lines to weep.
They know that Hamlet and Lear are gay;
Gaiety transfiguring all that dread.
All men have aimed at, found and lost;
Black out; Heaven blazing into the head:
Tragedy wrought to its uttermost.
Though Hamlet rambles and Lear rages,
And all the drop-scenes drop at once
Upon a hundred thousand stages,
It cannot grow by an inch or an ounce.
On their own feet they came, or On shipboard,
Camel-back; horse-back, ass-back, mule-back,
Old civilisations put to the sword.
Then they and their wisdom went to rack:
No handiwork of Callimachus,
Who handled marble as if it were bronze,
Made draperies that seemed to rise
When sea-wind swept the corner, stands;
His long lamp-chimney shaped like the stem
Of a slender palm, stood but a day;
All things fall and are built again,
And those that build them again are gay.
Two Chinamen, behind them a third,
Are carved in Lapis Lazuli,
Over them flies a long-legged bird,
A symbol of longevity;
The third, doubtless a serving-man,
Carries a musical instrument.
Every discoloration of the stone,
Every accidental crack or dent,
Seems a water-course or an avalanche,
Or lofty slope where it still snows
Though doubtless plum or cherry-branch
Sweetens the little half-way house
Those Chinamen climb towards, and I
Delight to imagine them seated there;
There, on the mountain and the sky,
On all the tragic scene they stare.
One asks for mournful melodies;
Accomplished fingers begin to play.
Their eyes mid many wrinkles, their eyes,
Their ancient, glittering eyes, are gay. 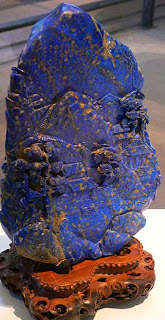 The poem recounts the rise and fall of civilizations and is an overly optimistic view of the triumph of art over the tragedy of war and destruction. Written in March 1938, just after the Nanjing genocide, the Lapis Lazuli Chinamen in question was a stone carving given to Yeats by the poet and mad eccentric Henry Talbot deVere Clifton in 1935.
I just wonder whether it is the language of trading rather than the language of art that overcomes all – and endangers all?
.
Reference:
http://www.nytimes.com/2010/06/14/world/asia/14minerals.html
Posted by Roger Derham at Wednesday, June 23, 2010