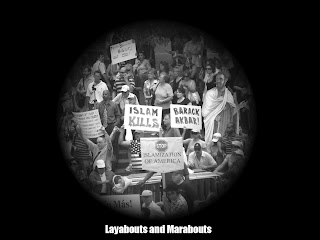 President Barack Obama and his family – code-named renegade, renaissance, radiance and rosebud by their secret service minders – recently flew to Florida’s Gulf of Mexico shoreline for their holidays. Here they will have lain about on recently sanitised sands, working on their tans and possibly utilising Factor 0 from the ‘D’Arcy Exploration Suntan Oil’ range (For more on D'Arcy see Blog of Dec 7, 2009)! Before he departed south Obama took a very calculated risk and, in a speech to mark the month of Ramadan, and took the opportunity to throw his political weight into the controversy surrounding the Cordoba Initiative’s plan to establish a new ‘mosque’ about two blocks from ‘Ground Zero’.

Obama forcefully endorsed the right of Muslims – and any religious group – to practice their religion. He said that this right,
“…includes the right to build a place of worship and a community center on private property in lower Manhattan, in accordance with local laws and ordinances."
He concluded by stating emphatically, "This is America, and our commitment to religious freedom must be unshakable."
I think that the speech was a very calculated gamble, but parking political cynicism to one side, it was also a very brave and necessary gamble.
The notion of a ‘mosque’ being sited at Ground Zero appears to be the most emotive and divisive issue. This is unfortunate particularly as the planned building by the Cordoba Initiative is more of a community centre and ‘lodge’ (tekke in Turkish, khanqah in Farsi, zawiya in Arabic) for the Khalwati Jarrahi Sufi Order whose Shayk is Imam Feisal Abdul Rauf. Khalwati derives from khalwa which means a ‘spiritual retreat’ and this is essentially what is planned for the top two floors – above the swimming pool – of the building rather than a formalized mosque.
Throughout their history Sufi Orders have depended on travelling missionaries or guides to bring their message of a more personal and mystical Islam to the world. Throughout history also the founder’s lodges have served as a ‘spiritual retreat’ for these itinerant marabouts. Somewhere to return to.
Where the controversy over the Ground Zero 'mosque' is concerned President Obama now needs an ‘Agarabe’.
Agarabe, in the Tamasheq language of the Tuareg people, is the descriptive term of the court-appointed position of Envoy to the Itinerant Marabouts, in the Court of the Sultanate of Aïr, in the Agadez region of Niger, on the southern margins of the Sahara Desert.
Established about 1400 C.E. by a confederation of three Tuareq clans – the Kel Owi, Kel Ferwan and Itesen – the Sultanate of Aïr has survived the Malian, Songhai and French empires (the current Sultan is the 126th) to still control the lives and welfare of the people of this part of Niger.
Sufi marabouts or igurramen (in Berber) are individuals or families of ‘saints’ who can trace their lineage to Hasan Bin Ali, the Prophet Muhammed’s grandson and 5th Caliph. Marabout derives from murabit or ‘man of the ribat’, the Almoavid ‘holy warriors’ who were established in Sahara frontier outposts in the eighth and ninth centuries. Murabits were originally ‘holy men’ who lived as hermits but during the 12th century Sufism created ‘lodges’ or communities of these holy men where the way or tariqas to the knowledge and experience of God could be taught. 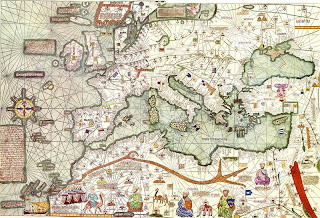 The Catalan Atlas of 1375 showing North African
Kingdoms along lower border.
Later, originating in zawiya lodges of Morocco itinerant marabouts became a very important part of the North African pastoralist Tuareq society. Versed in the Koran, Islamic law and mystical practices they served not only as visiting judges and preachers but with a knowledge of Arabic and or Turkish could liase on behalf of the Tuareq people with the Arab coastal and Ottoman overlords. What all marabouts had in common, in the Tuareq language, was that the baraka or blessing of God was with them.
By appointing a special envoy, the Agarabe, to liase with these itinerant marabouts the Sultanate of Aïr was also visibly demonstrating the desire of the Tuareq clans to defend themselves against any accusation of laxity in spiritual observance.
The notion of wayside hospitality in the zawiyas of the marabouts of Aïr was a fundamental aspect of their existence. I suspect that the current American embodiment of what an Itinerant Marabout once did for the Tuareq, Imam Feisal Abdul Rauf, will maintain the hospitality tradition in the proposed building near ground zero. Hence its community focus.
I genuinely believe that this Sufi establishment  is not a development to be feared and should be embraced. Embraced not because the zawiya (or niche) presents an 'acceptable', inclusive and moderate promotion of Islam in contrast to the exclusive, fundamentalist and terrorizing aspect but because it will encourage dialogue between the faiths rather than deny it.
The new Sultan of Dare, Barack Obama should now continue to be pro-active and appoint his own Agarabe to accelerate the process.
Further Info:
http://www.saudiaramcoworld.com/issue/200301/agadez-sultanate.of.the.sahara.htm
Posted by Roger Derham at Wednesday, August 25, 2010