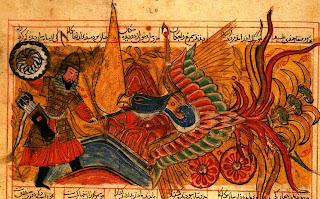 The serendipitous pleasure gained when one’s professional and peripheral interests coalesce is magical and none more magical when that convergence meets in a museum exhibition of the quality of the Heroes and Kings of the Shahnama exhibition currently running (Nov17 to April 3, 2011) at the Chester Beatty Library in Dublin.

The Shahnama – the Book of Kings – was the great multi-generational mythological-historical poetic opus – running to 50,000 lines of verse – detailing the history of Persia and the Iranian people and written over a thirty-year period by the Persian poet, Hakīm Abu'l-Qāsim Firdawsī Tūsī, known more commonly as Ferdowsi, and presented to the Ghaznavid ruler Sultan Mahmud in 1007 CE.

From my perspective I have always had a deep affection for the mythological cycles in the Shahnama and particularly for the appearance of the Simurgh, the great midwife. The half bird, half beast was Zal’s wetnurse and later when Zal’s great love and wife Rudabeh ran into difficulty in labour it was the Simurgh who returned and instructed Zal how to perform a Caesarean Section operation to deliver her.

“The mother must be drugged with soothing wine,

Till sense forsakes her, and she feels no pain;

Then must her side be opened, and the infant

Drawn through the wound. This being done, close up

The deep incision with the nicest care,

And take the herb, which I shall give to thee,

Prepared with milk and musk, and rub it well

Upon the severed flesh, and pass this feather

Along the part, and health will be restored.”

Zal obeyed the instructions and arranged for a skilled priest or Magi in the Zorastrian faith to perform the operation and thus the great belligerent hero of Iranian literature, Rustam ( a very similar figure to Cúchulainn in Irish mythology) was born. 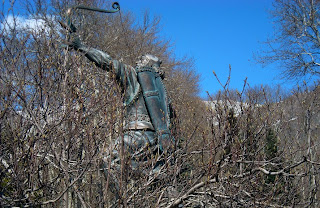 From an obstetric perspective the description always fascinated me: a lateral incision – similar to the yotsé dofan of 1st century Talmudic texts – was used rather than midline; anaesthesia was induced; and with care the mother was sometimes expected to survive. A lateral incision rather than a midline approach however meant it was more likely that the major blood vessels of the womb would be damaged. 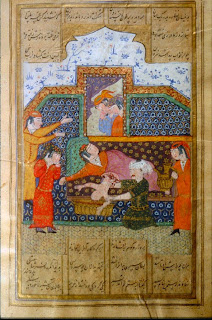 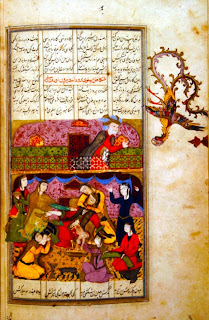 This was in distinct contrast to the western tradition where Caesarean Section had been reserved for women who had died but were undelivered. This intervention dated to the Lex Regia law of the second Roman King, Numa Pompilius (reigned 715-673 BCE). In the ‘Dark’ and early medieval ages the live birth of a child by caesarean section in a dead mother become associated in popular superstition with the birth of the anti-christ. 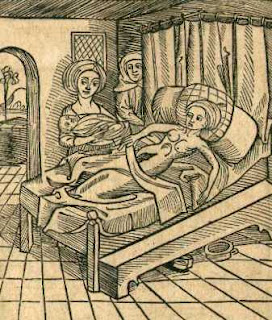 It was only from about 1600 CE onwards that Caesarean Section operations began to become part of obstetric practice in difficult labours and sometimes be associated with survival of the mother. The first successful (mother and baby survived) Caesarean Section in the United States was as late as 1794, 800 years after Ferdowsi wrote the Shahnama. 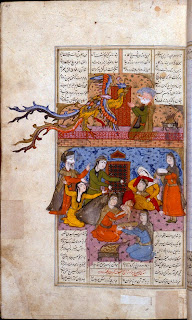 The Exhibition at the Chester Beatty is well worth visiting.
Posted by Roger Derham at Saturday, November 27, 2010