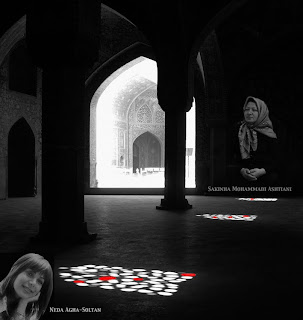 On Thurs evening I watched a documentary on the brutal suppression of the protests that followed the Iranian presidential elections of June 2009 when unexpectedly incumbent President Ahmadinejad was announced as the winner when the majority of neutral and national observers predicted a win for Mir-Hossein Mousavi. The images that most captured that brutality were those of Basji militia members on motorcycles charging into the demonstrators slashing out with batons, and the blood coming from the mouth of 26 year-old Neda Agha-Soltan who had been fatally shot by the pillion passenger of one of those motorcycles.

In December 2009, an Iranian state television channel, Press TV aired a report about her death, saying it was ‘a western plot’. The program then argued that Agha-Soltan had ‘simulated’ the graphic images of her dying moments with accomplices, and that in fact she was killed afterwards by the very men, including a doctor, who were seen trying to save her!

It came as no real surprise therefore when the same Iranian Press TV yesterday aired a documentary showing Sakineh Mohammadi Ashtiani, the woman sentenced to stoning for adultery, apparently re-enacting the events leading up to the death of her former husband. This is a travesty of justice – the woman in question has already been convicted of that murder in 2006 and subsequently had her sentence of death-by-hanging commuted by an appeals court in 2007 to 10 years imprisonment – to be running a media ‘re-trial’ of the murder offence, with the sole purpose of ignoring the appellate court decision and creating an environment where a re-imposed execution order by hanging is justified and all because of umbrage at the international condemnation of the determination of the Iranian authorities to execute Ashtiani for the ‘lesser’ or ‘greater’ offence – depending on whose perspective is employed – of adultery.

The rationale for the clumsy and deplorable propaganda, indeed the very necessity for it, is indicative of the systemic failure of the Iranian Islamic Republic and in particular the failure of Iranian Penal or Criminal Code of 1991 and its barbaric provisions for lapidation or stoning for the crime of adultery.

Some of the Penal Code Articles dealing with how the punishment of stoning should be conducted are cited below:

Article 99 – If adultery by a person, who meets the marriage-bound conditions, is proven by his/her confession, then at the time of stoning the first stone will be thrown by the Shari’a judge and then by others, and if the adultery is proven by the testimony of witnesses, then first the witnesses will throw stones, then the Shari’a judge, and then others.  Note – Absence or lack of action of the judge and witnesses in throwing the first stone shall not prevent carrying out the sentence and in any case the punishment must be executed.

Article 100 – The flogging punishment for an adulterer man shall be carried out as he is standing and wearing no clothing except to cover his genitals. Lashes must forcefully inflict his entire body except for his head, face, and genitals. An adulterer woman shall be flogged in a sitting position with her clothes bound to her body.

Article 101 – It is appropriate that the judge informs the public of the time of the punishment and it is necessary that a group of believers, not less than three people, be present when the punishment is carried out.

Article 106 – Adultery during the holy times such as religious festivities and Ramadan and Friday and at holy places such as mosques will constitute flogging in addition to the regular punishment.

It is noteworthy that under the provisions that if the accused escapes and the conviction for adultery has been brought about by his own testimony rather than by witnesses then the accused may not be brought back to the pit. There is no legal definition of what constitutes an 'escape'. In addition from the very way that men or women are differently physically buried or constrained a man has a far better chance of effecting an escape than does a woman from the 'pit' .

It was hoped that the 2008 revision of the Code would remove these barbaric provisions but instead further capital offences for 'crimes' such as apostasy and witchcraft were enshrined. Everywhere people are looking, hoping, that change is coming. They are looking to leaders of the future who could, if not outright revolutionists, and would from a position of influence pursue an agenda of democratic, social and criminal reform. 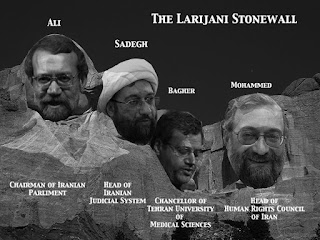 Many now consider that the future of Iran is in the hands of the Larijani family who appear to have the blessing of supreme leader Ayatollah Khamenei and are now installed in some very important positions pursuing a conservative but pragmatic agenda.

Mohammed Javed Larijani is Secretary-General of Iran’s High Council for Human Rights. His brother Ali Ardasher Larijani is Speaker of the Parliament of Iran and former chief negotiator for Iran’s nuclear program.

Another brother Ayatollah Sadegh has been Chief Justice of Iran since August 2009, and another Bagher is a Chancellor of the Teheran University of Medical Sciences and former Deputy Minister of Health. A fifth brother Fazal is a former envoy to Canada.

In addition their sister is married to Seyed Mostafa Mohaghegh Damad a very prominent professor of jurisprudence, law and philosophy in Qom, and a staunch critic of the previous chief justice Ayatollah Hashemi Shahroudi.

The Larijani’s have been equated to the Kennedys in America. Both families in their pursuit of power appear to be happiest and most effective operating in radical stealth mode, trying to marginalise the hardline factions, while hiding their true political intentions.

It is a dangerous game though! And also it is difficult for an outsider looking in to reconsile their very public and conservative expressed views with a perception that somehow they will effect change.

For example Mohammed-Javed Larijani, the Secretary-General of Iran’s High Council for Human Rights said in a recent interview in America,

"Stoning does not mean beat her until she dies," he said. "Stoning is like flogging, like lashes. It means that you should throw a limited number of stones of limited size. She may survive; she may not."

This was so disingenuous a comment and so far removed from any normal understanding of even a basic concept of human rights – or medical reality – as to be patently untrue. Death as an outcome, as Mohammed Larijani well knew, is categorically demanded in the punishment of stoning by Article 102 of the Penal Code. There is no provision for the maximum number of stones that should be thrown (two is the minimum number) just their size!

I am not certain why Mohammed Larijani chose this tack. Perhaps is was a deliberate digression, a manifestation of the well developed Iranian trait of taqiyeh or dissimulation; and thus presenting a Larijani stonewall to their detractors or enemies within Iran!

I hope I am not misreading the situation entirely and that with the positions of Speaker of Parliament, and Chief Justice attained Mohammed-Javed and the Larijani’s can push a reformist agenda of the Iranian Penal Code and that this effort should be supported.

It has to accelerate however. There are 10 women and four men currently on death row in Iran awaiting execution by stoning for adultery.