Rihla (The Journey) – was the short title of a 14th Century (1355 CE) book written in Fez by the Islamic legal scholar Ibn Jazayy al-Kalbi of Granada who recorded and then transcribed the dictated travelogue of the Tangerian Ibn Battuta. The book’s full title was A Gift to Those who Contemplate the Wonders of Cities and the Marvels of Travelling and somehow the title of Ibn Jazayy's book captures the ethos of many of the city and country journeys I have been lucky to take in past years.
This rihla is about Galway, Ireland.

There is a tendency when travelling afar to sometimes overlook places closer to one’s heart. The shortest journey can often take you on the longest detour and Galway, my home for 20 years and an early medieval port-city town founded about 1124, is a city of detours which arise and impact on ones senses in the most unexpected fashion. Today was no exception. I was in the city to go to the bank but my access to the building was blocked by barred doors facilitating a security firm cash delivery service. There was a howling Atlantic gale and horizontal rain whipping up the street so to get shelter I crossed the road and into the solid sanctuary of St Nicholas Collegiate Church.
I have always liked the atmosphere inside St Nicholas, even on a day like today when it was completely empty. A Church of Ireland place of worship since the Reformation, it was founded in 1320 and a friend of mine, Pat Towers was rector here for many years. He is now sadly retired but happily younger in spirit than when he started. Pat was ordained in the Japanese Anglican Church and his sermons, which I would sometimes pop in to listen to, were always expansive, always inclusive, and always, always a worthwhile detour.
Today as I wandered around I thought I could hear him still. St Nicholas’ Church is like that though and unlike any other. Many Anglican churches with their very visible veneration of the dead of wars gone by, of lost regiments – in St Nicholas’ case it is of the Connaught Rangers – and men, are mausoleums of melancholic echoes. The echoes in St Nicholas are muted, and yet eternally hopeful; they are echoes of joy, and harmony and not of decay.
St Nicholas of Myrna, to which the church is dedicated, is the patron saint of sailors and there are churches named for him in many sea-ports around the world. Whenever I am in a Mediterranean or Nordic sea-port I have made a detour to search out and visit any church named for him. Of course he is also the patron saint of children and best appreciated by them in his Santa Claus role. And this thought was the one that echoed in my head today. I went to look at a memorial plague on the western transept wall to which I often returned. It was placed there in remembrance of James Johnson Kearney who died on the 22nd February 1837 aged 11 years. The memorial is poignant in that it states that his “death was occasioned by his Top having fallen from him and in stooping to regain it a Car rolled on him in the street.” 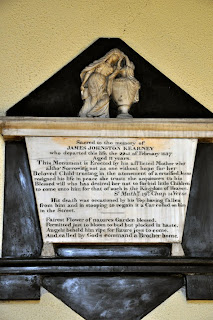 James Kearney's Memorial
St. Nicholas' Church, Galway
I often wondered whether the wooden spinning top had been James’ Christmas present from Santa Claus. There were no motor-cars then of course and the Car in question had to have been a horse and cart but it must have been either speeding out of control or extremely heavy to have caused his death and I have always wanted to find out more about the incident. Galway streets in 1837 were not built for speed, as is evident by the picture below of Buttermilk Lane painted by William Evans a year later, so it must have been the load and with time on my hands and the foul weather driving me indoors I ‘detoured’ for the Galway library’s newspaper archive on Goal Road. 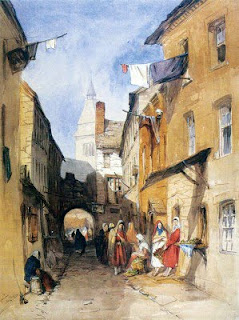 Buttermilk Lane looking north-east
by William Evans 1838
(St Nicholas' Spire in background)
Ever helpful the library staff left me in without an appointment and set up the microfilm for the Galway Advertiser of February 25, 1837. And there it was: James, the only son of the local Customs Comptroller, a ‘fine interesting child’ according to the obituary was rolled over by a cart laden with timber while ‘playing at top’ and ‘lingered in excruciating pain’ until dying on the 22nd of February. 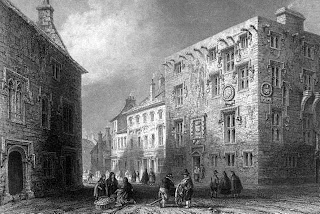 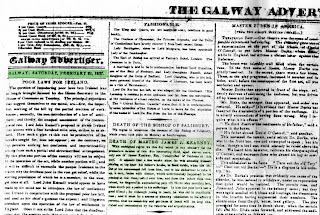 The accident happened on what then was called Back-street ( now St Augustine’s Street) near the Custom House at the river end (which still exists) and the cart must have been taking timber from a ship docked at the quays at the then New Dock near the Long Walk (the current tidal protected dock in Galway did not open until 1882). It is likely that the cart would have had to call to the Custom House to declare its load and it is sad to consider that James father ( also called James) may himself have inspected and given the cart clearance just before it rolled over his son. 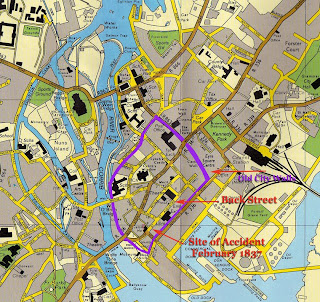 This is not the only industrial accident associated with the docks recorded on the walls of St Nicholas’ Church. A memorial stone to George Frederick de Carteret ( he of the Cart!) from Jersey who died aged 22 years on the 21 March 1843. His ‘lamentable death was occasioned by want of lights on the docks’ and he drowned on a ‘dark and tempestuous night.’ 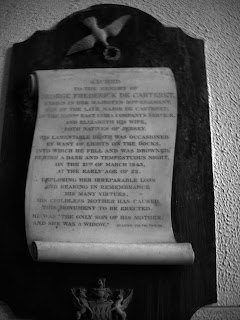 That is yet another Galway detour … and for another day.