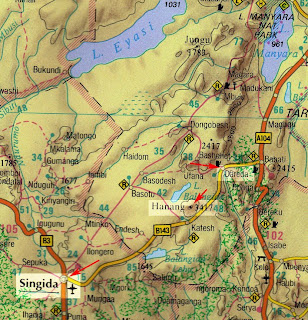 Rihla (The Journey) – was the short title of a 14th Century (1355 CE) book written in Fez by the Islamic legal scholar Ibn Jazayy al-Kalbi of Granada who recorded and then transcribed the dictated travelogue of the Tangerian Ibn Battuta. The book’s full title was A Gift to Those who Contemplate the Wonders of Cities and the Marvels of Travelling and somehow the title of Ibn Jazayy's book captures the ethos of many of the city and country journeys I have been lucky to take in past years.
This one is about Mt. Hanang, Tanzania and like much of Ibn Battuta’s travelogue it is more about society than geography. 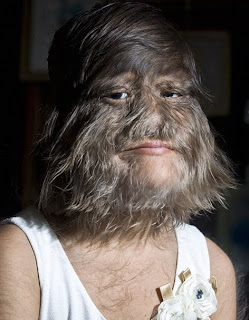 Supatra Sasuphan
Bangkok
(Hypertrichosis or Ambras Syndrome)
Strange the serendipity of memories and the events or images that trigger those memories. Recent events in Libya where Muammar al-Gaddafi employed foreign mercenaries to kill his own people and the newspaper picture of a young Bangkok girl Supatra Sasuphan, who suffers from the very rare genetic disorder hypertrichosis or excessive hair-growth brought me back to a day spent on the slopes of Mt. Hanang in Tanzania in August 1979.
That summer I was working in a small mission hospital run by the Medical Missionaries of Mary at Dareda in the Manyara district, as a medical student on an elective attachment and primarily in maternity care. It was a great place to be but it also had its dangers.

Earlier that year, on April 10, the combined forces of the Tanzanian Army’s 201st and 208th Brigades (approx 30,000 men) and the Ugandan National Liberation Army (UNLA – 3,000 men) having defeated the forces of Idi Amin entered Kampala, the capital of Uganda and forced Ami's exile from the country – to Libya initially and then Saudi Arabia where it was reported he died from complications associated with Tertiary Syphilis. In Idi Amin’s defeated army was an expeditionary force of 3,000 Libyans (including tank regiments, MIG flight squadrons and units of the Islamic Legion) sent by Muammar al-Gaddafi to help. Ultimately this contingent bore the brunt of the fighting and approximately 500 of them were killed before the remainder escaped home via Sudan and Ethiopia.
Tanzania was forced to bear the financial brunt of this ‘liberation’ action with very little outside help (full reparation of $67million was finally paid off by Uganda to Tanzania in 2007). At the time the Tanzanian army in particular and Tanzania in general were completely under-resourced and after the victory over Amin many of the Tanzanian ‘peace-keeping’ troops were repatriated in the most desperate circumstances. Many were told simply to make their own way home without any logistic support. As a consequence every now and then during that summer some of these ‘returning’ heroes strung-out on the long Mwanza-Singida-Arusha trail would enter Dareda and wait until nightfall to demand sexual favours as a ‘patriotic duty’ from the young trainee nurses in the nursing school attached to the hospital. It was rape in all but name but glossed over and accepted in the ‘glory’ of the victorious war effort. In addition although these Tanzanian demobbed troops were packed-off homeward with no ammunition in their guns you could never be sure and the threat of greater retributive violence was always present from members of the dominant local waIraqw tribe, the tribe to which most of the violated student nurses belonged and who claim in a complete reversal of the accepted transmigration of homo sapiens from the Rift Valley northwards to be a middle-eastern people who migrated south.
As in all war or immediate post-war situations people look for ‘normal’ diversions to maintain a semblance of humanity and in my case it was playing soccer for the local team. Matches came around erratically so I jumped at the opportunity, when asked, to climb with colleagues from another hospital, a local mountain. 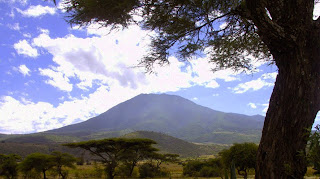 Mt. Hanang
Tanzania
Mt. Hanang an extinct volcano about half-way between Dareda and Singida is at 3417m the fourth highest mountain in Tanzania after Mt Kilimanjaro (5895m), its sister peak Mt Mawenzi (5121m), and Mt Meru(4556m), but has the distinct advantage that it can be climbed in one day (six hours up and four hours down). The Mt Hanang area was the home of the Barabaiga tribe, one of the thirteen territorial sub-tribes or emojiga of the Datoga people and sometimes called Mang’ati after the Maasai word for enemies, Ilmang’ati. As a group they were suffering greatly both in culture and habitat from enforced displacement from their pastoral grounds by a huge Canadian-Tanzanian wheat project on the escarpment.
We were delayed in getting to the mountain for an early start by a time-worn truck radiator and our guide suggested, to make up for the lost time, to take a shorter but less used route to the top. We agreed and set off, climbing steadily over the next four hours. The pathway was steep through the prickly brush and when we flagged our guide would encourage us onwards through the montane forest of East African olive and yellow-wood by extolling the fabulous views Hanang had over the Rift Valley and its unusual volcanic cone. This worked for a while until we then met a siafru column on the march.
Siafru or safari ants when in column can be quite aggressive when confronted and have a very painful pincer bite. This column was huge and was splaying laterally to occupy most of the narrow path. Our guide looked once at the column, once at his watch and determined that getting around the column would occupy too much time and it would be better if we came back another time. We reluctantly agreed and trundled back down the mountain. Near the base we decided to have the picnic we had intended for the top and given there was no pressure on us the afternoon merged into evening and at one point the guide disappeared off to a nearby farmstead and brought back some of the honey-mead the Barabaig were famous for. This was quite potent and the stories started flying about.
One of our climbing party was a waIraqw nurse-anaesthetist at the hospital and she suddenly said how she would love to resurrect the lion-man tradition of the area to extract revenge on the returning soldiers for their violation of the trainee nurses at the hospital. I asked her what she meant, and she told be about the isolation and training of mentally unstable boys in the past by ‘sorcerers’ as assassins. They would be dressed up as lions and adopting leonine behaviour – lycanthropy is the psycho-pathological name for this behaviour – be then sent out or indeed hired out to avenge a wrong. Many villages had such sorcerers’ apprentices and there was a clear perceptional distinction made by villagers between necessary 'white-magic' witchcraft practices including healing and the casting out of spells, and the evil 'black-magic' activities of the sorcerers. The most infamous accounts of these lion-men killings occurred in 1948, and eventually resulted in the trial and execution of three women and two male 'sorcerers'. 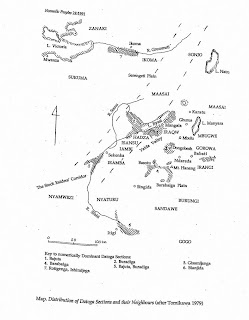 Distribution of Datoga Tribes
Tanzania
The waIraqw nurse went on to say that she regretted that her tribal tradition of 'black-magic' witchcraft had almost disappeared – there was an anti-Witchcraft Ordinance promulgated in Tanzania in 1965 and updated to a law in 2002 – but that the Barabaiga at least had maintained that tradition. This was an interesting observation for a member of a different tribal group to make as the Barabaiga in particular had always been hated for their murder-customs, which in the case of a human enemy meant bringing back the genitals of their victim as proof. They also had had a long history of metida or isolation practices for normal societal life, outside those used for 'black-magic' lion-men indoctrination.
Our guide, who was a Christian member of the Gisamijanga sub-tribe of the Datoga, laughed at this point and stated that the Barabaiga were meerly stealing the ignorance and stupidity of the waIraqw meeta practices. He did agree that the lion-man tradition of assassination still existed and recounted that there was a current element of terror in nearby Singida due to a rumour circulating that a lion-man had been released to kill a teacher for the sexual assault on one of his pupils.
Witchcraft and sorcery is still unfortunately a major influence on the lives of rural people in Tanzania. There have been many witch killings in recent years and most recently there has been a spate of albino-child killings for body parts, which are thought to be the most magic charms available. This witchcraft practice has become such a serious problem the Tanzanian government has set up special refuges to take albino children in for protection. 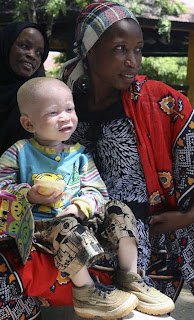 Albino Child at a Refuge
For Children at risk of Witchcraft Killings
Dar es-Salaam, Tanzania
In Ambras Castle in Innsbruck, Austria there is a special room known as the Cabinet or Chamber of Art and Curiosities. One of the pictures in the room is that of Petrus Gonzales the first recorded case of hypertrichosis and hence the eponymous Ambras Syndrome derivation. Cabinets of Curiosities were a very late Renaissance collectors’ passion. Depiction and therefore exposure of the ‘anomalies’ helped reduce the notion of witchcraft being involved.
Mt. Hanang in Tanzania as a location is a living, breathing Cabinet of Curiosities of sorts, where witchcraft is still the norm, and where lion-men, albino children, and Muammar al-Gaddafi reside in the real world and in the spirit world beyond.
Further Reading:
http://www.guardian.co.uk/world/2008/nov/16/tanzania-humanrights
Albino Africans live in fear after witch-doctor butchery
This article appeared on p35 of the Main section section of the Observer on Sunday 16 November 2008. It was published on guardian.co.uk at 00.01 GMT on Sunday 16 November 2008. It was last modified at 00.48 GMT on Sunday 16 November 2008. It was first published at 00.02 GMT on Sunday 16 November 2008.
Posted by Roger Derham at Wednesday, March 02, 2011