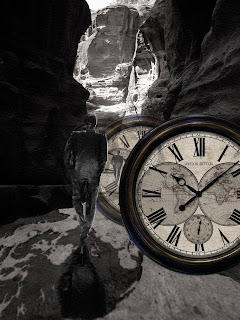 This Rihla is about Whitby, Yorkshire, England. 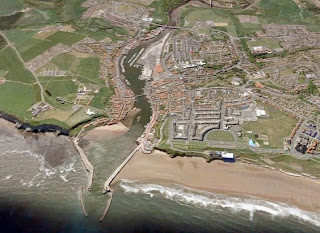 Notions of time and place loom large this time of the year when once again the scholastic, legal, civil and religious society of European and European-derived countries is dictated by the movable feast of Easter, a Christian celebration of the Resurrection of Jesus Christ; a Christian celebration based on the very pagan new moon after the Vernal Equinox and a calculation designed to avoid the competing Passover celebration of the Jewish faith. It seems to me, now that our lives are timed by a universal cosmic atomic pulse instead of a lunisolar centrifugal revolution we should settle, for example, on the first Sunday in April as a constant and do away with the alchemal calculations, that continue to resonate of the early medieval proofs derived to show the Sun circled the Earth rather than the other way round.
These notions reminded me of a journey made to Whitby, a fishing port on the east Yorkshire coast a few years ago for the wedding of my nephew. Although I had lived and worked in Leeds from 1988-‘89 I had never made it to Whitby and looked forward to seeing the town, for it was a place that had featured strongly in the imagination of my adolescence. 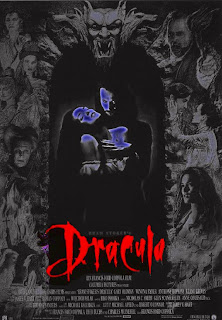 Dracula Film Poster
Parking the car near the crescent-shaped green that overlooked the beach and the cold North Sea beyond I stepped out into a warm day with only a light easterly wind blowing. The sea beyond was calm, unlike an August evening in the late 1800’s when a most unusual and violent storm struck Whitby:
‘Then without warning the tempest broke. With a rapidity which,
at the time, seemed incredible, and even afterwards is impossible
to realize, the whole aspect of nature at once became convulsed.
The waves rose in growing fury, each over-topping its fellow, till
in a very few minutes the lately glassy sea was like a roaring and
devouring monster. White-crested waves beat madly on the level
sands and rushed up the shelving cliffs. Others broke over the
piers, and with their spume swept the lanthorns of the lighthouses
which rise from the end of either pier of Whitby Harbour.’
This, as some of you will recognize, was Bram Stoker’s description of the storm that wrecked the schooner Demeter of Varna on Whitby’s sands and brought Dracula to England… and the Goths to Whitby.
It was a fantastic wedding, full of joy, and to cap it all, after trooping down from the escarpment of the upper town, we had the wedding breakfast on the beach. A wedding breakfast of ‘Fish&Chips’ from a nearby famous shop, carried in boxes by the groom along the shore, who just about avoided a rapidly incoming sea starving his invited guests. 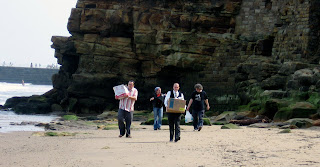 The Wedding Breakfast cometh with the tide!
Aaron should have consulted his lunar tidal tables, I thought as I watched him dodge the waves, and wondered what James George Frazer’s The Golden Bough said about pagan auspices and vagaries for weddings.
Later we had a chance to walk the narrow streets that descended sharply to the fishing port. The shops and hostelries were a mixture of old world charm and new world Gothic indulgence. One in particular specializing in Draculian nail-painting and tattoos had a sign saying ‘Fuck off – We’re closed’ and another the Little Angel pub had a mounting stone outside, there for centuries, to help you onto your horse.
On the summit of the hill opposite, on the southern side of Whitby harbour, was the ruined Abbey (St Hilda’s monastery of Streanaeshalch – the Northumbrian name for Whitby) where in 664 at a Synod, King Oswiu accepted the central authority of the Roman Church’s way of calculating when Easter Sunday fell in preference to the Ionian or Celtic Church’s calculation.
The Council of Nicea, chaired by the Emperor Constantine in 325AD, gave responsibility for calculating the dating of Easter to the Egyptian Church. Headquartered in Alexandria the calculation was based on the 19-year Metonic lunisolar cycle. The early, and competing, Church in Rome used the 84-year Hippolytic cycle for calculation and it was this formula that was adopted into the early Celtic Church. The Roman Church finally accepted the Alexandrian calculation method about 465 AD and in 530 AD Dionysius Exiguus, an Abbot from Scythia, devised what we now call the Christian era and set out clear methods for calculating the date of Easter. This calendar is what Oswiu accepted for the Nothumbrian Kingdom in the Abbey overlooking Whitby in 664 although the remnant Celtic Church monks of Iona did not do so until 715.
I thought of Dracula again, my newly-married nephew, and of the schooner Demeter which brought Dracula in the storm to Whitby; Demeter the Greek Goddess of the Harvest who presided over the seasons through the Horae, the goddesses of the natural portions of time…and chips perhaps! 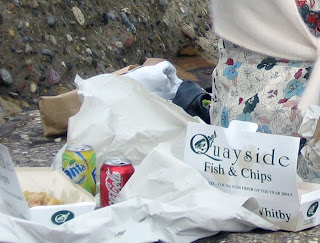