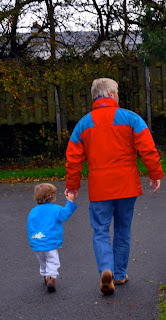 We too, we too, descending once again
The hills of our own land, we too have heard
Far off --- Ah, que ce cor a longue haleine ---
The horn of Roland in the passages of Spain,
The first, the second blast, the failing third,
And with the third turned back and climbed once more
The steep road southward, and heard faint the sound
Of swords, of horses, the disastrous war,
And crossed the dark defile at last, and found
At Roncevaux upon the darkening plain
The dead against the dead and on the silent ground
The silent slain---
Archibald MacLeish (1892-1982)

It’s late at night, just me and the dog; both of us increasingly deaf, where peripheral sounds merge, congeal almost as you try to concentrate on the main sound, the main message. And that message echoes loudly before leaving a silent void, and an enormous sense of disappointment in … us, us the citizens of this world.
In the pettiness, the denial of dignity, the lack of tolerance and the lack of foresight.
In the week that the notional seven billionth child was added to our population adding to the inexorable exhaustion of our marine and agricultural capacity to sustain; in the week that bond-holders for Greece prepared a very Damoclean sword to cut the Gordian knot that binds the notion that is Europe; Israel and the US responded to the admission to UNESCO of Palestine with Israel cutting off VAT receipts to the Palestinian Authority, accelerating the (always intended despite the assurances) building of yet more houses on the West Bank, orchestrating systematic computer attacks on Palestinian interests and testing long range ballistic missiles with the ability to attack Iran and the US, epitomising the fading Imperium that it is, pulling politically and financially out of UNESCO in support of the Israeli stance.
And why has the US pursued this course?
Does it not matter that China holds the mortgage on both the US and Europe; that China’s entire existence depends on supporting its overwhelming population by mopping up the resources of everywhere else because it can, because it now owns them anyway; and that a point will come not that far in the future where China will have to physically expand west into Kyrgyzstan and Kazakhstan to follow the way of Tibet.
Does it not matter that if Israel ever launches a ‘limited’ nuclear strike against Iran that it can be contained; or that a nuclear-capable Pakistan, in the hands of generals who in defiance of their own government are already supporting a counter-American war in Afghanistan, will stand idly by downwind of that holocaust.
The American poet, and 9th Librarian of Congress, Archibald MacLeish, one of the architects of UNESCO’S 1945 Constitution, and chairman of the inaugural session drafted the first lines of the Constitution’s preamble. He wrote:
That since wars begin in the minds of men, it is in the minds of men that the defences of peace must be constructed
UNESCO was founded, in large measure by an American post-war idealism since lost, to bring an intellectual dimension, reason even, to the aspirations of peace, prosperity and human dignity for all of mankind. The reality is, like it or not Palestine and the Palestinian people have a right to exist, a right to dignity. By its very 'mindless' and petulant actions the US, and Israel have in the ‘minds of men’ left us defenceless, mired in a field of broken dreams.
Posted by Roger Derham at Friday, November 04, 2011