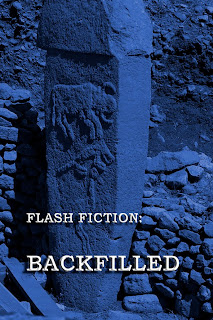 Jack moved uncomfortably in his chair. He had been in the office many times before but now its decoration irritated: Mayan glyphs, a sonogram print of whale noise, a 1693 French naval map of Galway Bay, a picture purloined from National Geographic of an ancient temple, a line drawing of an archaeological dig from Orkney; other random stuff... but not a Munch or Van Gogh in sight.
‘You seem very agitated today, Jack.’
The silence broken. He turns toward its source. ‘I’m not doing this any more,’ he said with finality.
‘Why?’
‘One... two reasons. I cannot afford it and its going nowhere.’ The walls appeared to close in on him.
‘I think that in these past few months you have made enormous progress.’ The voice was soft, neutral.
Jack resisted the desire to stand up and strip the office walls bare. Instead he concentrated on the uncluttered desk between them, and decided to say what he had planned to say. ‘That’s crap and you know it Robin. If I was making progress how come I feel so disjointed, so disturbed. I want closure with the past so that I can get on with my future.’
Another silence enveloped them. Then, ‘I don’t do closure Jack.’
It hit him like a thunderbolt. He gasped for air and stuttered, “Well what the hell am I doing here so?’ He stood up and went to the window. Tears were forming.
Again, after a little time, the neutral voice, ‘Apart from the desired outcome of these encounters, you and I have a shared interest in archaeology. Is that not right?’
‘Yes,’ Jack replied not turning back. ‘What has that got to do with it?’
‘Do you see those pictures on the wall? The picture of what is thought to be mankind’s earliest temple complex at Göbekli Tepe in Turkey, which was built at the beginning of the Neolithic about 10,000 BC. And that line drawing of the temple complex from the Ness of Brodgar in Orkney from the end of the Neolithic, about 2500 BC?’
Jack turned, looked at the wall, nodded.
‘What have they in common, apart from marking the beginning and end of Stone Age monumental dialogue with the Gods?’
Jack took down the National Geographic picture, retook his seat and stared at it. ‘Apart from our lack of true understanding, I don’t know.’
‘They were backfilled.’
‘What?’
‘Backfilled! There came a day when the temple complexes had either outlived their function or their location. Both existed for about 2000 years and then were deliberately backfilled. Their existence buried but not erased. The people that had built these monuments were moving on, either by choice or as a consequence of pressures caused by changes in environment or population migration. Who knows? But it was not a closure just a transition… a backfilling. Do you see what I am getting at?’
‘Yes! I think so,’ he replied, the tears drying up.
‘A hex on the notion of closure, I say! The consequences of existing, good or bad, are never closed, never can be, Jack. Just backfilled and then you move on.’
‘But?’
‘Time’s up for today Jack! But take that picture with you. I’ve been meaning to redecorate.’
© R.Derham 2012
Posted by Roger Derham at Monday, January 02, 2012