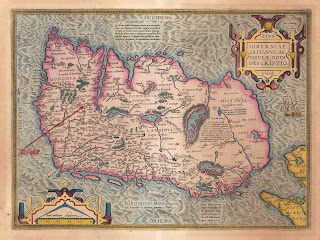 This rihla is about ADARE, Co. Limerick, Ireland.

Adare village in Co. Limerick, Ireland, is an urban anthelion of the otherwise Famine-blighted fogbound stone-rot landscape of Ireland of the 1840s with its wide boulevard, well built houses, pointed walls, cared-for thatch, generous public spaces, muted providence, august trinity of friars, and the brash satisfaction of a true manorial town that once serviced the needs of Adare Manor (commissioned in 1832 by Windham Henry Quin, the 2nd Earl of Dunraven and Mount-Earl with the spirited encouragement of his wife Caroline and finished by his son Edwin Wyndham-Quin, the 3rd Earl in 1862 in the midst of a social and economic disaster that existed elsewhere) but is now almost smug in its continuing exuberance that has seen it regularly voted as Ireland’s most beautiful town. 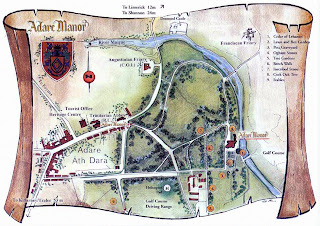 The Quins of Adare were the hereditary chiefs of the Hy Ifearnan (Heffernan) clan, of the Cineal Fearmaic sept of the Dál gCais kingdom of Munster (c.1000CE), and were originally from Muintir Ifernain in central County Clare (the later barony of Inchiquin). Windham Quin’s father Valentine, one of the last titular Gaelic tribal chiefs elevated to a peerage, was made an Earl in February 1822.
But Adare is much older a place than the Quin’s manor and its original Irish name was Áth Dara meaning the Ford of the Oak and this brings me to the connection to mistletoe. In the small walled garden of Adare Manor that now serves as the practice putting green for the championship golf course there are 5 or 6 apple trees that produce a really succulent fruit. But it is in December, when the apple fruit and foliage has withered away that the trees are at their most majestic. For it is then that they are covered in most wonderful green and white berry medley (like hollies only the female has berries) that is the mystical and magical mistletoe. There are few, if any, places in Ireland that you can see, never mind touch, the plant in all its glory. 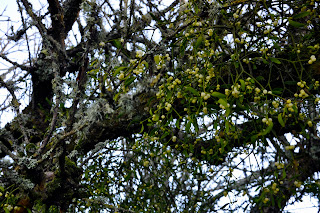 Mistletoe, a hemi-parasite plant that is transferred as a sticky seed excrement by the Mistle Thrush from deciduous trees (oak, apple sometimes lime) to tree, is not a native Irish plant yet does have an ancient Irish name: drualas. This is a derivation of Druidh las, the Druid’s herb. Very little is written down concerning the Druids but Pliny the Elder in his Naturalis Historie (c79CE) states,

"The Druids (so they call their Magi) hold nothing in such sacred respect as the mistletoe, and the tree upon which it grows, provided it be an oak. 'Omnia sanantem appellantes suo vocabulo.' (They call it by a word signifying in their own language All-Heal.) And having prepared sacrifices, and feast under the tree, they bring up two white bulls, whose horns are then first bound; the priest, in a white robe, ascends the tree, and cuts it off with a golden knife; it is received in a white sheet. Then, and not till then, they sacrifice the victims, praying that God would render His gift prosperous to those on whom He had bestowed it. When mistletoe is given as a potion, they are of opinion that it can remove animal barrenness, and that it is a remedy against all poisons."

Beyond the pale of the manor Adare’s medieval ecclesiastical history is still visible with the presence of three Abbeys: Augustinian, Trinitarian and Franciscan. 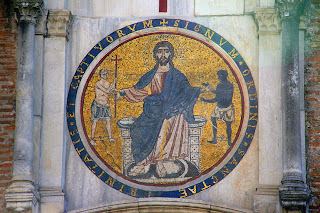 Mosaic from 1218 above door of Trinitarian Church of
San Tommaso in Formis in Rome.

The Trinitarian establishment (now the Roman Catholic Parish church) for me holds the most fascination, as the Trinitarian Order of Friars, who dedicated their lives to raising ransom money to redeem Christian captives on the Barbary Coast (as well as running hospitals in the slave banos of Algiers and Tunis), featured strongly in my first novel, The Simurgh and the Nightingale about Barbary Pirates in the 1600s. The Trinitarian Order, founded by St. John de Matha, was approved of by a Bull of Pope Innocent III, Operante divine dispositionis clementia, issued on the 17th December 1198. Other early Christian captive redemptionist orders were the Spanish Military Order of Santiago (1175), The Order of Montegaudio (1178), and the Order of the Merced (1218).

The Adare abbey was the only Trinitarian establishment in Ireland and they had been invited there around 1229 by a second-wave archtypical Anglo-Norman robber-baron Geoffrey de Marisco. Geoffrey’s full name was Geoffroi de Montmorency de Marisco, Lord of Thorney and Huntspill in Somerset (Marisco being a derivation of Marsh). Geoffrey was well connected to Ireland as his sister had married Thomas Fitzmaurice Fitzgerald the founder of the House of Desmond. He became the Justicar or Lord Chief Justice of Ireland from 1226-28 and in addition to his connections also inherited extensive lands in Ireland from his uncle-in-law John Comyn, Archbishop of Dublin in 1192. He subsequently expanded his holdings by marrying as his second wife, Eve de Bermingham, the daughter and heir of Robert de Bermingham, Baron of Offaly.

In addition to the Trinitarian Abbey Geoffrey also invited the Knights Hospitaller to establish a commandery in 1215 in nearby Aney (now Hospital). The advantage of settling military and religious orders by the Norman barons on their properties was not entirely pious but guaranteed that associated (and tithe paying) lands would be held safe and their value increased. Geoffrey was to take part in many Norman attacks on the Irish in Connacht. This too was to leave a legacy as the Morris family, one of the famous Tribes of Galway, owe their descent to him.

It was not to end well for Geoffrey however. In 1238 an attempt was made to assassinate Henry III of England and suspicion fell on William (Geoffrey’s son– executed by being drawn, hung and quartered in 1242 for piracy and murder) and Geoffrey. Some time between then and 1242 he fled to Scotland where he was sheltered by a kinsman, Walter Comyn. In 1244 he was forced to leave Scotland, possibly as part of the agreement reached in that year between Henry III and Alexander II and he died in France in the following year.

Mathew Paris in Vol iii of his Chronica Majora of 1250 (with a side drawing of the execution of William) said unlovingly of Geoffrey that he was,

"a man who formerly been a noble and not least amongst the magnates of Ireland, who had incurred an indelible stain by the treacherous murder of Richard Earl Marshal, and who was now an exile, a wretched and hunted man, having been expelled from Scotland deported from England, and disinherited in Ireland, after the ignominious death of his son and the loss of all his friends, banished from public view, finally ended so many deaths with his own. (Obit Galfridus de Marisco, exul, pauper et profugus).” 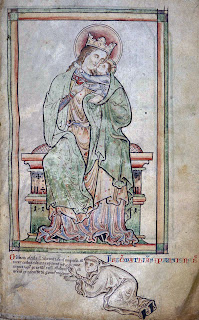 As you turn your back on Geoffrey’s Trinitarian edifice and walk back up the street and through the imposing gates of Adare Manor, you stare up at the oaks, and think of druids and ritual, pagans and sinners, slaves and free, normans and celts, exile and homecoming, and the perpetual timeline of change. 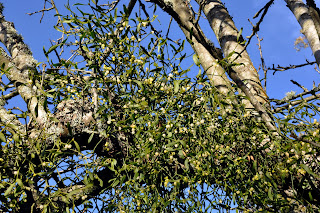 And yet at the end of your journey, in a quiet walled-garden, you stand and wonder at the exuberance, the magic and mystery, and timelessness of mistletoe. That alone will always bring me back. 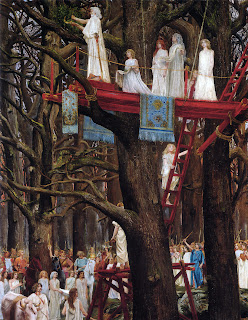 Druids cutting mistletoe with a golden sickle from an oak.
Posted by Roger Derham at Monday, December 17, 2012