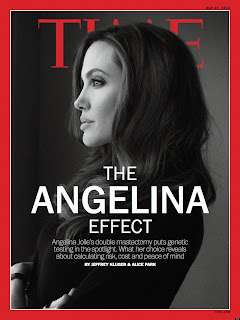 When Angelina Jolie announced recently that she had undergone an elective double mastectomy to prevent her significant risk of developing breast cancer her decision was based on the fact that she had been tested positive for mutations in the BRCA1 & BRAC2 cancer genes, cancer genes that had been discovered and patented by Myriad Genetics Inc., of Utah, USA.

The testing of a far greater number of people for these gene defects would save an enormous amount of women from the morbidity and mortality associated with breast and ovarian cancer (50-80% risk of breast cancer and 20-50% risk of ovarian with BRAC mutations) but it cannot be done routinely or at community level because the test is so prohibitively expensive (for my patients if I order the test for them privately it costs about €3000 per test). The reason for this exorbitant cost is that the testing, even at an international level, is completely monopolised by Myriad Genetics.

Myriad, directed by Nobel-prizewinning scientist and member of the board Walter Gilbert Ph.D., was founded in 1991 and in a ground breaking discoveries identified the exact location and composition of the BRAC1 and BRAC2 genes to Chromosome 17 and 13 of the human genome. Using this knowledge of location and nucleotide composition Myriad then developed testing for mutations, patented those tests and began offering testing and risk-profiling commercially.

Myriad defended their patents vigorously and in a specific instance blocked Genetic Diagnostic Laboratory of the University of Pennsylvania from offering the mutation test to the patients of Dr Harry Ostrer, then of the NYU School of Medicine but now the Professor of Pathology and Genetics and the Albert Einstein College of Medicine, NY.

Dr Ostrer objected to this application of patent power and with a number of associated patient and physician groups filed a lawsuit declaring Myriad’s patenting of part of the human genome to be invalid. The US District Court agreed with Ostrer et al. in 2009 but the Federal Court reversed the decision in 2011 and held for Myriad. In 2012 on appeal to the US Supreme Court, by a petition of certiorari, the Supreme Court vacated the Federal Court judgement and referred it back to the Federal Court on remand. This time the Federal Court, firstly recognised Dr Ostrer as the sole petitioner with standing, and then affirmed the original District Court decision.

The US Supreme Court had then, by virtue of the fact it had originally referred the case back to the Federal Court, to give a Writ of Certiorari to the reversed Federal Court judgement and it did so on June 13, 2013 (569 U.S. ____(2013) ) after presented arguments on April 13, 2013. In an opinion entirely concurred with by eight of the nine Supreme Court judges and delivered by Justice Thomas the Court held that naturally occurring DNA was not patentable and that scientific discovery did not mean exclusivity i.e the ‘Laws of nature, natural phenomena and abstract ideas are not patentable.” He concluded the opinion by stating, “We merely hold that genes and the information they encode are not eligible under §101 (US Patent Law) simply because they have been isolated from the surrounding genetic material.” 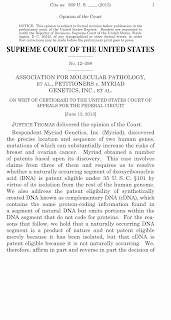 There was another very important aspect to the case particularly for future commercial exploitation of DNA. Thomas, J in delivering the opinion of the Court, in a telling obiter dicta, stated that if patents were to be applied to The Laws of Nature etc then that “would be at odds with the very point of patents, which exist to promote creation.” This obiter will remain very persuasive into the future to reign in exclusive commercial exploitation of genetic “discovery” enabling a greater ease of application and not a corporate stifling of it. 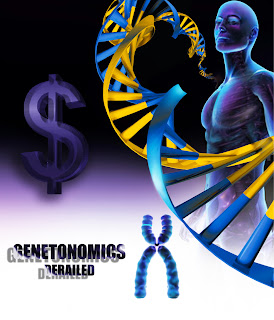 The GENETONOMIC derailment is welcomed.

I look forward to now being able to get the very important testing done for my patients at a much more economic and affordable rate. 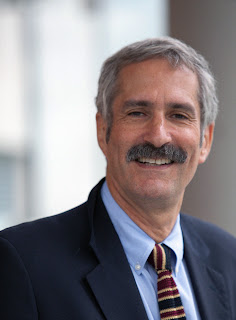