This rihla is about Angkor, Cambodia.

"O Kings …I implore you, you who are anxious to protect my foundation…protect it against evil forces…protect each portion of the sacred material, even the smallest one, made of wood or stone, against looters, people committing sacrilidges and other scoundrels.”

I thought of these verses, of this posthumous request of one King to his successors to look after his legacy, on reading the Judgement handed down by the International Court of Justice on the 11 November 2013 in Cambodia v. Thailand concerning a Request for Interpretation of the Judgement of 15 June 1962 in the Case Concerning the Temple of Preah Vihear. 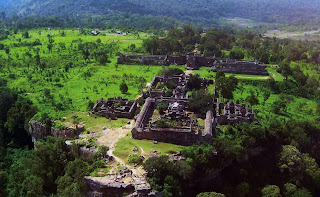 The Temple of Preah Vihear sits high on an outcrop of the Dangrek escarpment and right on the border of Thailand and Cambodia, a border defined by 11 maps drawn up in 1907 by four French Officers following the 1904 Treaty between Siam (Thailand) and Indo-China (Incorporating Cambodia). The border on the Dangrek –Commission of Delimitation between Indo-China and Siam map showed it to pass north of the Temple leaving the Temple in Cambodia.

Following Cambodian independence on 9th November 1953 (almost 60 years to the day before the recent judgement!) Thailand occupied the Temple prompting Cambodia to appeal to the ICJ. In a Judgement handed down on the 15 June 1962 the ICJ confirmed the Temple to be in Cambodia and obliged Thailand to remove its occupying forces. Thailand complied but only by a couple of metres and erected a barbed-wire fence surrounding the site. 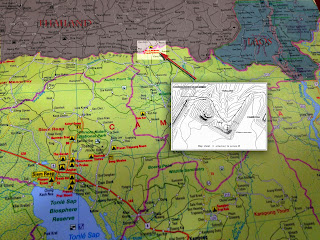 Cambodia went back to the ICJ filing a request, on the 28 April 2011, for a essentially what amounted to a ‘geographical’ Interpretation of the 1962 judgement as well as seeking an immediate injunction on Thailand’s incursions into Cambodian sovereign territory at the site. This Injunction was granted on the 18 July 2011 pending the full hearing of the case.

The Court was fully pre-occupied with interpretation of what constituted ‘watersheds’, ‘vicinity’, ‘region’, ‘temple area’ and ‘territory’ but was adamant that it was not dealing with the delimitation of the Thai-Cambodian border as a whole but only that of a small area of sovereign territory. In a fine line of reasoning, however, the Judgement then endorsed the territorial sovereignty of Cambodia over the Preah Vihear temple complex by 'geographically' moving the disputed zone back north westwards along the promontory to the foothills of a nearby hill, Phnom Trap, about 1 km beyond Thailand’s barbed-wire fence (Accordingly, the Court considers that the promontory of Preah Vihear ends at the foot of the hill of Phnom Trap, that is to say where the ground begins to rise from the valley –para.98).

In almost identical words (800 years apart), to Jayavarman VII’s Royal Edict of the 12th century quoted above, the Court reiterated (para 106) that ‘each State is under an obligation not to “take any deliberate measures which might damage directly or indirectly” such heritage.’

Whether this happens or not remains to be seen! 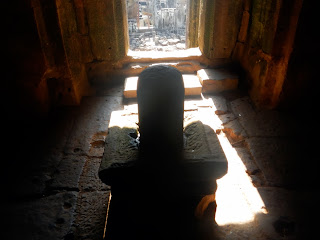 The Preah Vihear (Sacred Shrine) temple is located at the northern border of what would have been the greatest extent of the Khmer Kingdom under King Jayavarman VII. Originally constructed in the 9th Century it was dedicated to the Hindu God Shiva, the Destroyer and God of the North and the Mountains. A little later it became a centre of Brahminism under Suryavarman II (1113-1150) and then converted to a Buddhist centre of worship, which it has remained.

The impetus for the pre-eminence of Buddhism in Cambodia after its decline elsewhere in the 7-10th centuries was the accession of Jayavarman VII to the Khmer Kingdom in 1181. Jayavarman (Protégé of Victory) traced his Royal lineage back through his mother to Asperas Mera founder of the Khmer race. With the encouragement of his second wife Rajendradevi, a noted Buddhist teacher and poet, Jayavarman replaced the state religion of Brahmanism with Mahayana Buddhism, and in particular Bodhisattva ancestor worship, and thus laid the foundation – despite a Hindu iconoclastic reaction by followers of Shiva in the mid-13th century – for the later incorporation of peaceful Theravada Buddhism from Sri Lanka as the predominant religious practice in Cambodia.

Jayavarman was a prodigious builder of temples and public buildings (some 102 hospitals – divided into large, medium and small with very defined staffing and management rules – and over 121 rest lodges or dharmasalas on the main roads in his kingdom. 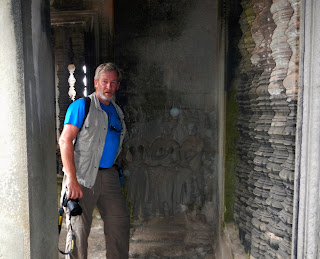 I had a chance to visit Angkor in April 2013. Humidity and time defeated my best efforts to cover as much ground as possible, and I suspect like the stories of the 1001 nights, you could return again and again and still not finish the story. The entire World Heritage Site is one of the most visited in the world, and deservedly so but the experience however would be so much better if it were not for the ugly shanty-town of restaurants and kiosks that surround the entrance and the lack of a properly designed, air-conditioned and funded interpretative centre.

Angkor provides an enormous cash-flow to the local and national economy, the majority of which must be being siphoned off as there is little evidence of it being ploughed back into infrastructure, to cope with the amount of visitors. That said the former capital of the Khmer Kingdom is truly monumental in its scale and artistry, although the Khmer sculptors were much more circumspect in their depiction of Vedic sexual shenanigans than their rhapsodic Indian counterparts. 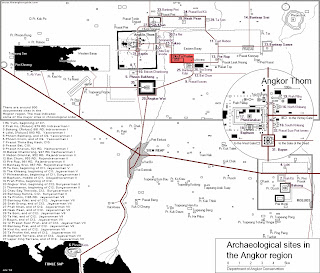 After Suryavarman II, the builder of Angkor Wat, Jayavarman VII was responsible for most of the buildings now seen in Angkor. One of the most famous of these foundations was the Temple of Ta Prohm (Eye of Brahmin), the Rajavihara or Royal Buddhist monastery and university built in honour of his mother Sri Jayarajacudamani (he placed a statute of his mother in the guise of Prajnaparamita, mother of the Buddha) in 1186. It was constructed around the same time as the great European masterpiece, Chartres Cathedral. 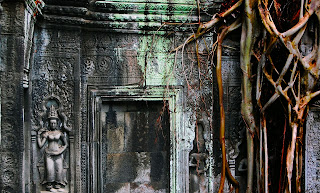 As a structure it is notable for many reasons but primarily for the decision of the restoration authorities to leave the large jungle roots and trees which were growing through its walls in situ as a testimony to the notion of the heritage of the Khmer Kingdom being lost to the jungle with the abandonment of Angkor in the 17th Century. The two predominant types of tree that entangle the ruins of Ta Prohm are the huge trunks of the silk-cotton tree, Ceiba Pentandra and the strangler fig, Ficus gibbosa with multiple grey roots. 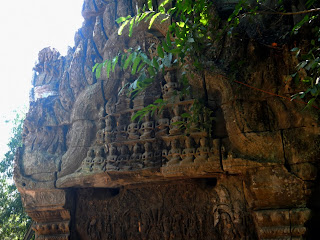 Before you enter into the inner complex a circumambulation of the area between the fourth enclosure wall and the double-moated fifth enclosure will reveal the 90 or so ruins of monks cells. Within the Temple proper the first building you encounter coming from the West Gate is the Hall of the Dancers, where access is restricted due to restoration works. 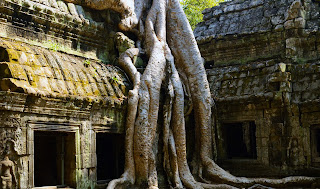 There is a small medallion on the western wall of the Southern side-chapel showing unusually Buddha (or a statue of the Buddha) being attacked by two figures with sticks, a medallion that features in a number of the buildings that Jayavarman VII commissioned. It may represent the story of Mara's soldiers trying to prevent Gautama mediating at the Bodhi Tree, therefore preventing his enlightenment but experts are unsure. In a strange was it almost predicts the anti-Buddhism iconoclastic reaction that was to happen fifty years later.

Ta Prohm is a microcosm of everything that the Khmer Kingdom was and became at its apogee. It also was the temple that featured in the film Lara Croft – Tomb Raider, a poignant title and reminder of so many looted Khmer treasures now located in museums around the world, looted by the ‘scoundrels’ that Jayarvarman warned against and that the International Court of Justice have tried legislating for by defining what a 'foothill' is!
Posted by Roger Derham at Friday, January 03, 2014