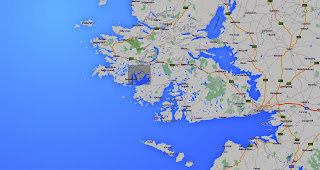 Quays of Connemara - Part VI
This is the SIXTH Rihla (see: Rihlas 47,49,52,53 &55) about the quays and slipways of the Connemara maritime (Conmhaicne Mara) coastline this time exploring those of Roundstone, Cashel  and Cloonile Bays. 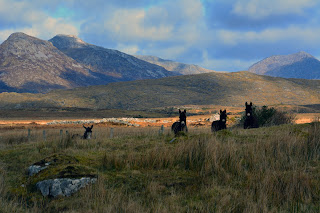 The whole landscape a manuscript
We had lost the skill to read
A part of our past disinherited:
But fumbled, like a blind man
Along the fingertips of instinct

I remember reading – deliberately seeking out – Montague’s poem  following a visit to the astonishing Neolithic urban complex at Çatalhöyük (c.8000 BCE)  near Konya and the earlier temple complex at Göbekli Tepe (c.9,000 BCE), northeast of Sanliurfa (Edessa) in Turkey in April 2012; elaborate, organised societal constructs that had been in existence for millennia and were already being abandoned before even the first peoples crossed over to a post-glacial Ireland.

In Turkish Göbekli Tepe means “Potbelly Hill”, and Çatalhöyük means "Forked Mound" descriptive toponyms (or for the purists, oronyms) of the appearance of the landscape on which the complexes are found. Being a romantic traveller “Potbelly Hill” or "Forked Mound" did not – despite a well-grounded understanding of the Turkish way of calling it like they see it – quite do it for me. Surely the extraordinary legacy of these sites should have had a more descriptive memory? But then I realised, as Montague had implied, parts of our past become ‘disinherited’, eroded more by language than perhaps by time. In Göbekli’s and Çatalhöyük's case Hattian, Assyrian, Hittite, Persian, Greek, Roman, Byzantine, Arab and Turk conquest had ensured this erasure of pre-historic topographic memory. 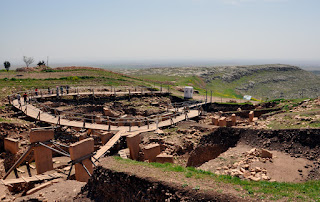 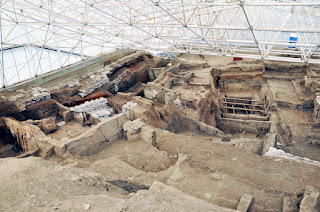 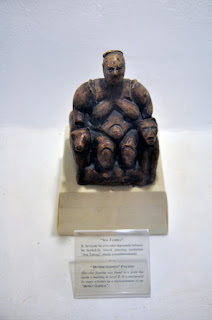 Yet, by way of solace, I also realised that all was not lost is this descriptive disinheritance, at least where pre-historical memories were concerned. In Ireland’s case, ensured by isolation and the later Bronze Age arrival of Celtic races whose language and storytelling embraced what had gone before, the pre-history was preserved in the landscape, a memory of a time when giants and mother-goddesses could shape both that landscape and human destiny. 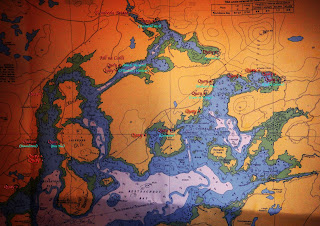 The Quays of Roundstone, Cloonile and Cashel Bays

The R341 and R342 roads that link Roundstone and Cashel in Connemara, with a junction at Toombeola Bridge, define a sociological tidal zone: a transition between the ancient, feral, scavenging, small-holding, climín (climín feamainne – seaweed bales) gathering, Irish-speaking south and south-western parts of Connemara and the semi-planted, Victorian, English-speaking western and north-western parts. It is a very particular landscape where the croísin seaweed gathering poles have been laid down in favour of the theodolite. 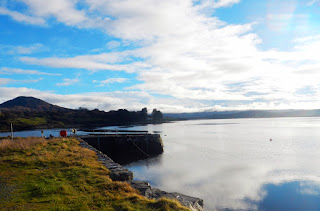 The distance between Roundstone and Cashel is only 13.5km and takes by car about twenty minutes. Yet in that journey you not only cross over a land distinguished by a change in language and attitude but also one that retains the lore of mythological giants and mother goddesses who shaped and named the land before ever a Celtic cattle-raid was made. This is all the more apparent if you hesitate on that journey and stand for a moment on Toombeola Bridge, the “sacred centre” of this particular journey. 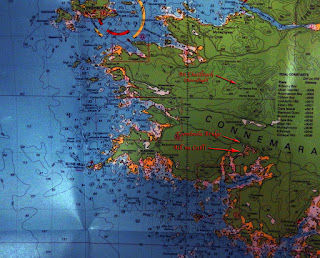 On one bitter-cold mid-January day that I was there a snowfall of the previous evening, like a sprinkling of icing sugar, separated the grey granite of the low mountains from the even lower grey sky. Beneath me the salmon-filled Owenmore River cascaded to the sea from Ballynahinch Lake and to the north rose the Twelve Pins, the mountains of Connemara that are called in Irish Na Beanna Beola, the bens or peaks of Beola. 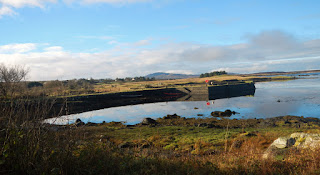 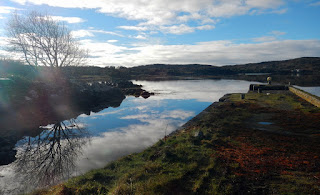 Beola, was a chieftain of the Fomorian race, the supernatural race of people who the Celts presumed had preceded them, a mythological giant of a post-glacial era who had shaped the mountains to his will. His burial site was supposed to be at nearby Tuaim Beola or Toombeola, where a cairn of stones marking the spot had been robbed to build an abbey in 1427, which then also become ruined; those same cairn stones being moved again to build a small O’Flaherty castle on an island in Ballynahinch lake. 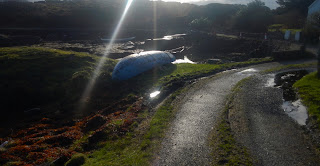 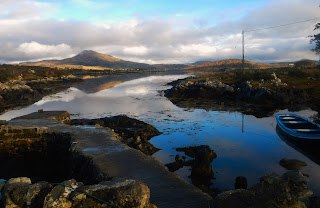 To the north of the bridge, beyond Ben Lettery, which overlooks Ballynahinch lake, is Ben Cullagh or An Chailleach, the Hag, named after the mythological mother of Beola. Her association with this area does not end there for south of the bridge there is a small, peninsular townland that links those mountains to the sea, links Beola to his mother, and which is called Aillenacally or Aill na Caillí, the Cliff of the Hag. 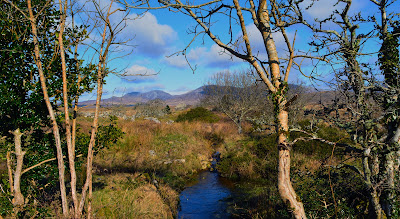 Looking directly north along the river that drains Toombeola Lake
into the sea at Aill na Callí (Aillenacally).The first mountain to
left of centre is Bencullagh or An Chailleach (The Hag)
with its denuded quartzite scree exposed slopes.

The Caillí or more commonly the Cailleach Bhéarra, or Hag of Beara, is one of the most persistent folkloric memories of a mythological mother goddess, an Indo-European crone whose name is retained on the coastlines from the north of Scotland to the south-western tip of Ireland. 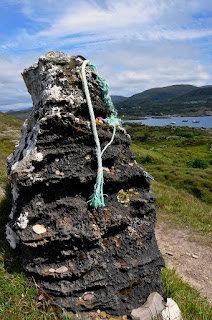 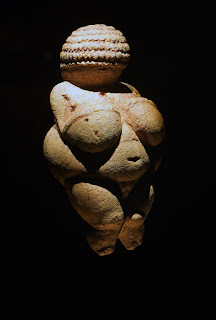 The Cailleach Bhéarra was, in our modern interpretation of the past, an inheritor of the Paleolithic (c.27,000 BCE) Venus of Willendorf, or the seated Goddess of Çatalhöyük (c.8000 BCE): the fecund goddess of winter, the earth-mother who could create and shape landscapes and individual rocks and who was also responsible for the winds and tides of destruction. In an early pagan Gnostic interpretation of the forces of good and evil that shape our human world the Cailleach represented the dark side and as such she demanded appeasement and was a primary target for eradication when the Christian missionaries landed on our shores. 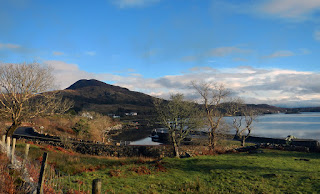 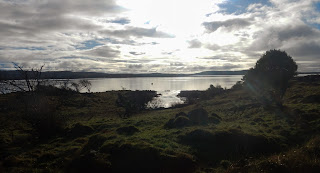 And yet she persisted in both memory and in the landscape. The Hag of Beara rock, a whitewashed pillar decorated with votive coins and bric-a-brac ( appealing in the main to the fertility prowess of the Hag, a form of In-Petrous Fertilisation you might say!), near Eyeries on the northern coast of the Beara peninsula is probably the most venerated of her old veneration sites, and a tangible link with our pre-historic past. Nearby Dursey Island, in Irish Oileán Baoi is named after the Cailleach Bhéarra and she is thought to have her final resting place in the townland of Baile na Cailleach on the Island. 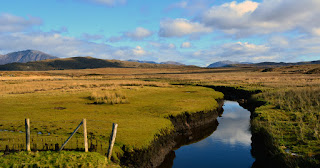 Summer of youth in which we were,
I have spent with its autumn,
Winter of age drowns everybody,
Its harvest has come to me.

The village of Aillenacally – Aill na Callí – on the south eastern shore of the small peninsula has succumbed to the wrath of the Cailleach. Abandoned by the last villager Peter Ward, who had lived without neighbours for nearly 12 years, in 1995 it comprises of about 14 roofless, thick-walled cottages and outbuildings that tumble down to the sea. It is reached by traversing a narrow road that first dips and then rises across a boggy flatland.

On reaching the village it is hard not, when looking back, to think of Peadar O’Donnell’s 1929 novel Adrigoole, and the reasons for villages like his fictional village right along the western seaboard being lost in time and place to economic emigration. The landscape is the protagonist. This is where the bog is sinister, or as O’Donnell writes, “subjugating” its inhabitants; where,

“Only low-lifed things could live in there; fat, bulbous lazy frogs that come out of soft,lifeless, spongy spawn, and go out again in slimy, clammy death.” 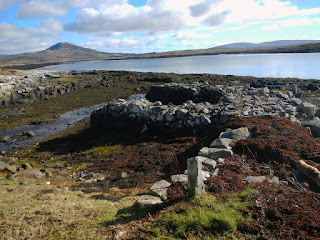 Below the last rise out of the bog there are two old harbours with crumbling walls, one of which is protected by a slim, 19th century sea-wall that stretches now without purpose into Cloonile Bay.

In the early 1990s a man called Paddy Power bought up the whole village and 65 acres of land and began to market the ruined village as the oldest village in Ireland. After court fights with his neighbours over access to commonage, and with his solicitors over difficulties in registering titles, Power sold the village to an anonymous buyer in 2008. One house in the village, Peter Ward’s, has been restored as holiday home but the remainder remain derelict. (Turtle Bunbury writes movingly of encounters with the last villagers Tony Ward and Mikey Conneely and I reference the link below). 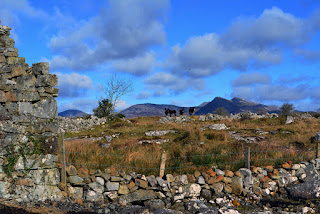 The first harbour you encounter as you climb a gate and follow a donkey path is Ward’s Harbour, its low walls crumbling back into the sea. 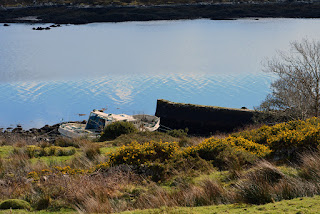 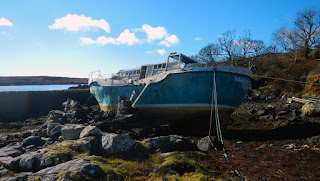 In the once main harbour a short distance westwards a dilapidated blue-hulled hulk of a schooner called the Manissa of Cork, lies forlorn, like tidal flotsam trapped within the crumbling walls of the old quayside, just about protected from the sea’s complete destruction by the slim 1820s breakwater. Paddy Power and his daughter had used the schooner as their home when he owned the village and the battered hulk was included in the 2008 sale.  At the neck of the breakwater is the ruin of a house that used belong to a Stephen O’Donnell. 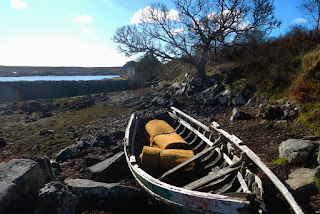 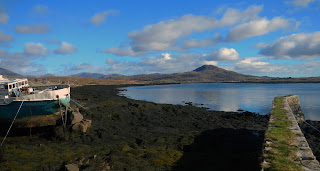 In Peadar O'Donnell’s later 1933 drama Wrack he intones an ancient history and the memory of the destructive winter gales of the fecund storm goddess Cailleach Bhéarra, bringing both pleasure and pain to mankind, when he has his character Fanny Brien lament,

“The thick thighs of the waves crushed the life out of our men, for I saw it.”

In the case of Aill na Caillí, the Cailleach, the Xenia Onatopp of mythology, the goddess of the winter storms has done just that: to man and stone. 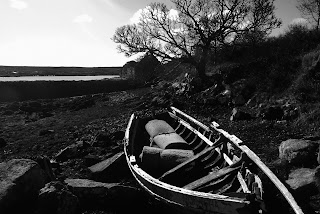