This rihla is about Yemen.

If there is a paradise on earth, it is this, it is this, it is this!
Inscription on the Tomb of Zahir-ud-Din Bábar Muhammed,
1st Mughal Emperor of India, Kabul, Afghanistan.
Paradise, is a word derived from the Old Iranian Avestan language grouping of para and daeza, meaning a ‘walled enclosure’. In addition to its Christian concept many other theological belief systems also incorporate the construct of a heavenly paradise whose physical and metaphysical expression resides in the notion of a garden of wonderment and abundance. The Elysian fields of ancient Greece, the al-Jannah of Islam, the Aaru reed fields of Egypt, the Hebraic Garden of Eden and so on were posited primarily as a place of reward for the faithful, the virtuous dead generally, rather than mere believers. As an extension of this theology many of the great mythical secular journeys of both ancient and modern history have incorporated a search for this paradise on earth, and or the notion of a paradise lost.
I remember reading many years ago Peter Levi’s book, The Light Garden of the Angel King, about his urge to go to Afghanistan in 1968 following the archaeological discovery of an Alexandrian Greek city there. The name of his book always fascinated me as it was derived from an inscription on the mausoleum of Bábar, the 1st great Mughal emperor of India who died in 1531. The mausoleum is in the Bagh-e Babur garden complex just outside Kabul and it read in full: Only this mosque of beauty, this temple of nobility, constructed for the prayer of saints and the epiphany of cherubs, was fit to stand in so venerable a sanctuary as this highway of archangels, this theatre of heaven, the light garden of the Godforgiven angel king whose rest is in the garden of heaven, Zahir-ud-Din Bábar Muhammed, the Conqueror.
I equally had an urge to complete a semi-mythical journey of my own, not necessarily in search of any mystical insight (as these generally depend on the time of the day, what you are imbibing or the company you keep and therefore have an ever-changing reality) but to prove to myself than all journeys are indeed possible.
In October 2006 I took a trip to Yemen and to the island of Soqotra in search of the old Frankincense routes from the island to the mainland of Yemen and then up through Shibam in the Hadramawt to the land of the Queen of Sheba(Saba) – Bilqis of the cloven feet – at Mar’ib. And this for no other good reason other than that since childhood I have had a fascination with the journey of the Magi of Bible fame to Bethlehem and of the gifts they brought i.e. gold, Frankincense and Myrrh. These Magi are always depicted as Zorastrian prince-priests from Persia but in my contrary view the only country that had indigenous supplies of gold, frankincense and myrrh of the quality required to be a gift was Yemen and the Dofar region of Oman. (The ancient Sumerian name for Oman was Magan).
Yemen And Soqotra Oct 2006
Soqotra an island off the coast of Somalia has a fascinating mystical history in that it was seen as the home of the Phoenix and in the Arabian Tales the home of the Rukh. 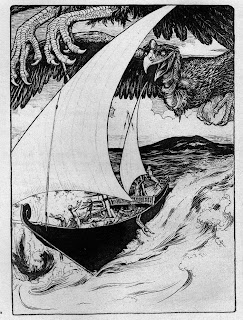 The Rukh of Soqotra attacking Sinbad's boat during
his Fifth Voyage.
(Illustration from Vol VI of Burton's Thousand Nights and a Night)
It also has a real history in that it was a centre of Frankincense production as early as 1000 BCE and by 100BCE, according to the Periplus of the Red Sea, this produce was controlled by mainland Kings and transported to warehouses at Qana (about 150km west of modern day Al Mukalla) and then to Shibam in the Hadramwat and beyond. In addition it was further settled by ancient Greeks and Indians as a trading post, and converted to Christianity at a very early stage by Syriac speaking Nestorian missionaries of the Assyrian Church of the East. It is home exclusively to 8 endemic species of Boswellia Frankincense trees including some of the most fragrant gum producers. It is also home of the endemic Dragon’s Blood tree (Dracana cinnabari) another fragrant resin producer. In addition to the extensive botanical variety the island has a mixture of alpine and coastal habitats that are beautiful to behold. Not perhaps everyone's idea of paradise but it comes fairly close to mine. Unfortunately when I was there in 2006 Socotra had not been granted World Heritage Centre status and as a result rapid and poorly controlled development was occuring despite the best efforts of the very dedicated people in the Enviromental Protection Authority. The roads were being built by the Bin Laden construction company, and there were plans in place to create a huge private compound for holidaying Saudis at the western end of the island. The island people, for the most part supported by fishing and subsistence farming, are very poor and as a community obviously welcome the opportunities and improved economic circumstances that the development is bringing but these expectations could be fully met by high-spend ecotourism rather than private beachfront hotel development. The island was in severe danger of being a Paradise Lost, lost to the greed of development. As Milton wrote in Book 1,
MAMMON led them on,
MAMMON, the least erected Spirit that fell
From heav'n, for ev'n in heav'n his looks & thoughts
Were always downward bent, admiring more
The riches of Heav'ns pavement, trod'n Gold,
Then aught divine or holy else enjoy'd
In vision beatific: by him first
Men also, and by his suggestion taught,
Ransack'd the Center, and with impious hands
Rifl'd the bowels of thir mother Earth
For Treasures better hid.
Thankfully in August of 2008 UNESCO and the World Heritage Council added the entire Soqotran Archipelago to the World Heritage List as an area of Outstanding Universal Value. This it is hoped will regulate any development that exploits the endemic flora and fauna of the island.

Interestingly as an aside you will see on the map the islands of Samha and Darsa which are known as the Brothers and which lie just to the south-west of the main island. The ancient Greek name for Soqotra was Discorides after the brothers Castor and Pollux (the Dioscuri), worshipped protectors from 'wind and waves' of sailors. In March 2008 I was interested to see that the famous, and very land-locked, Treasury building at Petra in Jordan – home of the Nabataens who controlled for many years the end stage commercial exploitation of the Frankincense routes – is dedicated to Castor and Pollux. I cannot but wonder whether this is a direct reflection of the Frankincence origin in Soqotra, and its importance to Petra. 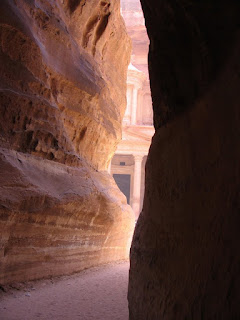 A worthwhile link for anyone who is interested in reading further about the Frankincense trade and Soqotra a very good article by Grainne Grant entitled
Socotra: Hub of the Frankincense Trade is to be found at http://undergraduatestudies.ucdavis.edu/explorations/2005/grant.pdf.
Posted by Roger Derham at Monday, January 12, 2009