The Rhythm of Life and Sweet Vibrations 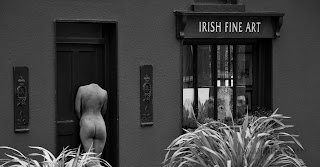 A shopfront in Innishannon, Co. Cork, Ireland.
With global warming and the gradual northerly shift in the warming Gulf Stream seasonal change in Ireland is becoming less obvious. However Galway is a university city and come the start of the academic year in mid-September the bedsits and flats around the town fill up with returning and first-time students and the vibrations begin again.
The first term has its’ own very peculiar and very amplified rhythm. Next summer’s exams are but a Star Wars futuristic concept. There is money from summer work or grants, hormones are raging, life-long friendships are forged on the backhanded flip of a beer-mat and logged in beer-soaked mobile phones. First time refugees from the restrictions of home exult in a freedom of opportunity, of exploration, … of mayhem. University cities have always learnt to adapt and deal with this expected seasonal disruption but nowadays I get the sense that there is far less understanding on the real streets of the ‘Game Boy’ generation of boyos. For many permanent residents it has become a decibelic chaos and the confrontations more bitter.
A friend of mine, well known for her pithy and acerbic wit, lives on a narrow cul-de-sac next to a student house and was determined to be pro-active in confronting the potential problems. She decided to introduce herself to the poor unsuspecting students next door with the following:
‘Hi, I am your neighbour, and I wanted to introduce myself. I am a menopausal woman who has had a breast removed for cancer and also part of my bowel. Generally I am pretty angry and pissed off at my bad-luck. That said I don’t care whether you self-harm, harm each other, shoot yourselves up in the back garden, remembering of course to tidy up the needles ... or blow your heads with crack … nothing, I don’t care!
The students were still looking at her in amazement as she turned to leave. She stopped and in her most threatening voice called back at them, ‘Just don’t do any of the aforementioned to music!’ 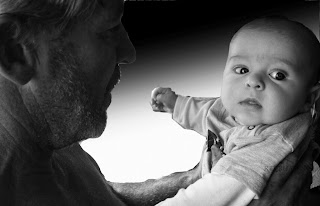 Young Leon creating his own rhythm
Posted by Roger Derham at Sunday, October 11, 2009