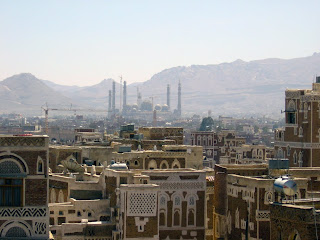 There is a real humanitarian crisis in Yemen at present resulting from the influx of external refugees from Ethiopia and Somalia but of more importance from the internal displacement of hundreds-of-thousands of villagers as a result of the Government efforts to eradicate Zaydi insurgents in the north, in Sa’ada, Hajjah and ‘Amran governates. 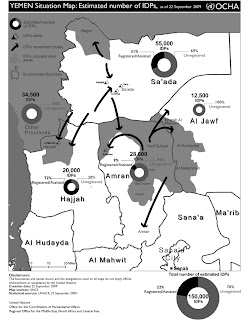 "The Sa'ada region has been largely sealed off to the outside world by Yemeni
forces since the current upsurge in fighting between government troops and
armed Zaydi Shi'a militants began last August, but it is clear that civilians are
bearing the brunt of the conflict,"
said Malcolm Smart, Director of Amnesty International's Middle East
and North Africa Programme. 18 September 2009
The al-Zaidiya are a Shi’a sect named after Zaid b. Ali b.Husain b.Ali b.Abi Talib who rose up against the Umaiyads and was killed in street fighting in Kufa in 122 A.H./740C.E. The Yemeni branch was founded in the 9th century by al-Hadi ila ‘l-Hakk Yahya and has always been based in the mountainous area of north-west of the country.
In previous centuries the Zaydis were in constant conflict with the Ottomans and now a branch known as the al-Houthi are in a constant secessionist conflict with the central government in Sana'a. Although a Zaydi himself Ali Abdullah Saleh, the 67 year-old long-serving president of Yemen (President of North Yemen since 1978 and of Reunified Yemen since 1990) has unleashed the dogs of war to eradicate the insurgent clans.
And this is the rub!
Refugees from the fighting are unlikely to find optimal sanctuary in neighboring Saudi Arabia either. For two reasons! Firstly Saudi Arabia has never signed up to the UN 1954 Refugee Convention (or its 1967 Protocol) and thus sees no obligation in providing official relief. Secondly and probably more importantly the areas of south-west Saudi Arabia bordering Yemen and governed from Najran are the homelands of Saudi Arabia’s minority Ishmaili community particularly the al-Yam clan. In addition to ongoing objections by the Ishmaili of central Saudi government settlement of Sunni Yemeni in the Najran area, and the imprisonment of Ishmaili leaders for their temerity (http://www.isn.ethz.ch/isn/Current-Affairs/Security-Watch/Detail/?lng=en&id=93757), historically the Zaydi and Ishmali are are also implacable enemies as a result of Da’i ‘Abdullah al-Hamdani’s enthusiastic support for the Ottoman campaign – designed to destroy the Zaydi imanate power – dispatched from Egypt in 1569 under Sinan Pasha.
Before the battle for Khadid castle in June 1569 Da’i Abdullah said ‘I shall unsheathe my sword from its scabbard after its long rest till tribe after tribe (of Zaydi) is slain.’
And to today. 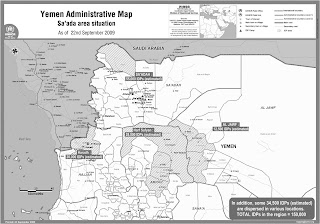 There is still no safe place for those caught up in the fighting. A resolution must be found but in the meantime as much help as can be mustered should be directed to the UNHCR program in Yemen. 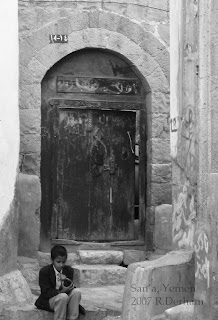