Rihla (Journey 14): Istanbul: Archers, Artists, Admirals and Architects in the Field of Arrows

Rihla (The Journey) – was the short title of a 14th Century (1355) book written in Fez by the Islamic legal scholar ibn Jazayy al-Kalbi of Granada who recorded and then transcribed the dictated travelogue of Ibn Battuta. The book’s full title was A Gift to Those who Contemplate the Wonders of Cities and the Marvels of Travelling and somehow the title of ibn Jazayy's book captures the ethos of many of the city journeys I have undertaken on foot in past years.
Here is an account of one such journey through Istanbul.
Turkey in general, from the ancient Urartian, Hurrian, and Hittite sites, to the oldest settled township at Catal Hulyuk, to Greek and Roman remains, to Armenian, Georgian, Seljuk and Ottoman places of worship, is a wonderful destination for the wanderer particularly those with a love of history and the craving to examine the architecture of that history. 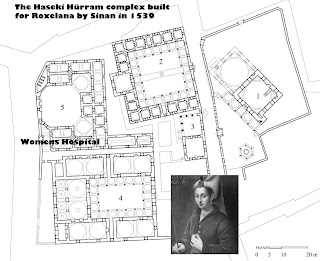 (Floorplan drawn by Arben Arapi)
I have long had an interest in the development of Seljuk and Ottoman hospital facilities and particularly in those that were dedicated to the care of women. A number of years ago I was conducting some background research on the combined mosque and hospital complexes designed and built by the outstanding Ottoman architect Mimar Sinan (1490-1588) (only Santiago Calatrava in modern times comes close to the innovation and range in structural architecture that Sinan accomplished) in and around Istanbul and of special interest were the Haseki Hurrem mosque and women’s hospital that Sinan built for Roxelana the wife of Suleyman the Magnificient, the beautiful Sulemaniye ( Sinan’s simple tomb is at the corner of a street close to this mosque) and the darussifa – a hospital with an insane asylum – at the Atik Valide Complex in Uskudar on the eastern shore of the Bosphorus. 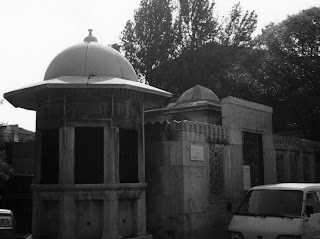 Sinan's Tomb
Having visited these it became more and more inviting, as it often does when your mind and body have a chance to go nowhere and everywhere at once, to try and see more of Sinan’s work. An equal interest in Ottoman naval history spurred me across the Golden Horn to visit the tomb he designed for the Kapatan Pashas (supreme commanders of the Sultan’s navy) Hayreddin Barbarossa of Algiers (1478-1546) in Beciktas and the mosque complex of Piyale Pasha (1515-1578).
The Piyale Pasha district is located on the southern margin of what once was the Okmeydani of Istanbul. Okmeydani means ‘field of the arrows’ and it was the area of land set aside by Fatih Sultan Mehmed, the conqueror of Constantinople in 1453, for the practice of archery, particularly flight archery where the effort was to try and send the arrow enormous distances rather than specifically at a target. Earlier meydani had been established in Brusa in the 1390’s and Edrine in the 1420’s and although Turkish horseback archery was long established flight archery ranges were an adoption of the Maydan as-Sibaq (Flight Shooting Field) established near Cairo by the Mamluk Sultan Baybars I in 1265. 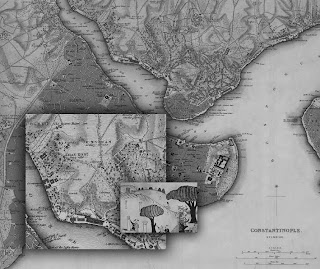 The extent of the hillside site on the northern side of Istanbul’s Golden Horn – The original circumference of the Okmeydani field was about 5000 metres – allowed the existence of a number of shooting ranges (Delikli Kaya, Arkuri, Mir-i Alem Ahmed Agha, Yildiz Menzil, Ali Bali, Sultan Mahmud II, to name a few) to be established, some of which were named after specific famous archers and which were then used depending on the wind direction and air turbulence to try and achieve the maximum distance possible. Small highly tensile Turkish composite bows were used and the special ‘pizrev’ tapered flight arrows were approximately 63cm long. The range origins were marked by a ‘footstone’ or ‘ayak –tasi’ where the archer would take his stance after ritual preparatory exercises and where the arrows fell – if a significant distance was achieved – a marker stone or column, the ‘nisan tasi’, was erected and usually inscribed, the kitabesi, with the name of the archer, the date, the wind conditions and the distance shot.
A sufi or deverish tekke or lodge for archers ( the equivalent of a guild but with mystical and religious procedures) was established during the time of Sultan Bayasid II (ruled 1481-1512) and Şeyh Hamdullah (1436–1520) one of the greatest Ottoman artists and caligraphers, became its first Shayk or leader. Many top calligraphers were also members of the archery tekke as the strength and control required for bowmanship was thought to help them in their penmanship. Successful archers were recorded in a ledger kept by the tekke and the initiates were inducted (kabza alma) into special elite groupings when they could fly an arrow 900 gez, 1000 gez, or 1100 gez. The induction ceremony was known as ‘taking the grip’. A gez has been estimated by modern analysis to be approximately 61cm.
Anyway my intention was to make my way to where the archer’s tekke originally stood (only part of its later minaret remains) hoping to see on the way the marker stone of Seyh Hamdullah and Tozkoparan Iskender (he holds the greatest flight distance record at 1281 gez (778m) in 1550). I went by water as it seemed appropriate. The northern shore of the Golden Horn or Haliç in Turkish was the site of the Arsenale of the Ottoman Navy and I took a ferry from Balat to Haskoy and detoured for a coffee and cake at the Rami M. Koc Industrial Museum Café at the Lengerhane (Ottoman anchor and chain factory) on Haskoy Caddesi.
Armed with a a 1974 book in Turkish on the history of the area by Ismail Fazil Ayanoglu documenting the site of about 100 of the nisan tesi or abedesi I headed up along Okmeydani Cd to join Toygar Sk, Sahin Sk and then up Dutluk Sk to find the marker stone of Seyh Hamdullah. No sign of this so I returned back towards Tekke Sk along the walls of the modern Okspor, the site of the original Archer’s tekke. The streets were narrow and dusty and many locals appeared both amused and suspicious as I consulted my map and peered into gardens and houses looking for lost pillars. I went down Kullakiz Cd to where the Halic Police Station is. Nearby is the marker stone of the main man Tozkoparan. It was only later that I found a Beyoglu Munipality map of the sites of remaining target stones (now only about 25 where once 300 existed) in the Okmeydani and many of these are displaced from their original locations.
The Okmeydani became a military enclosure after suppression of all Sufi Lodges, including the Archers, by Attaturk in 1924. Since the Second World War the area has become a warren of illegally built or ‘overnight’ houses which are now permanent where foresight and enforcement of Mehmed’s 1453 decree could have ensured a wonderful city centre park for ever.
I made my way back up past Sinan’s Sinan Pasha Mosque and eventually down the side of the hill to the Piyale Pasha Mosque. Piyale Pasha was the commander of the Ottoman forces, which inflicted a heavy defeat of the Holy League navy in 1560 at Djerba and was also recalled from retirement to rebuild the Ottoman Navy after defeat in the Battle of Lepanto in 1571.
I loved Sinan’s design of the Piyale in particular both from the outside as well as the inside. It incorporates a real lightness of touch, fun even, in its construction, with a large wrap-around covered verandah at one corner as well as wonderful candy bar coloured arches.
Hareke is the Turkish for slowing or concentrating on your breathing and dampening any excitement while preparing to shoot arrows. It was my time to dampen excitement and after an hour of looking around and imagining pizrev, kaabiz, or karabatak arrows flying over my head to land in the cemetery on the far side of the Piyale Pasha Boulevarde ( my book said there were 20 or so of the marker stones in that direction) I grabbed a taxi and headed back across to the old city.

I had enjoyed my day amongst the artists, archers, admirals and architects in the Okmeydani but there is only so much walking you can do in pursuit of moving stones.
http://en.wikipedia.org/wiki/Mimar_Sinan
Posted by Roger Derham at Thursday, May 27, 2010