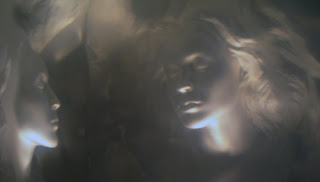 The first day of a New Year and is often the way a time, a brief moment in time, for reflection before the external demands of ‘being’ overwhelm the internal desires of ‘being’. By way of ethical disclosure and apology to the reader this reflection, or as a friend of mine once called it, ‘a voyage round my navel’, has been aided by Ry Cooder and Manuel Galban on the CD player, a glass of 12 year-old Jameson whiskey and the painkillers required to deal with a tooth abscess and absent dentist!
In a lecture to architects, entitled Talking to Myself About the Poetics of Space, given in February 2009, Peter Sloterdijk the renowned German philosopher posed a series of questions to himself to try and explain his seminal work on Spheres Theory. In the final question of the lecture he asked ‘Why do you think the preposition “in” is enigmatic?’ He answered (himself!),
‘Because it highlights both being-contained-in and being-outside. People are ecstatic beings. They are, to use Heidegger’s terms, forever held outside in the open; they can never definitely be included in some container—other than graves, that is. In the ontological sense, they are “outside” in the world, but they can only be outside to the degree that they are stabilized from within from something that gives them firm support. This aspect needs to be emphasized today in contrast to the current romanticism of openness.’
And where architecture was concerned he finished the lecture by saying,
‘Someone who builds a dwelling or erects a building for an institution makes a statement on the relationship between the ecstatic and the enstatic, or, if you will, between the world as apartment and the world as agora.’
Ecstasis means ‘to stand outside oneself’, where one’s consciousness is free to be open, to indulge in, as Sloterdijk suggests, a ‘romanticism of openness’. That current openness, or what Michel Henry in his 1962 Essence of Manifestation anticipated by coining the phrase ‘ecstatic-visibility’, is perhaps best explained by what social scientists have now termed ‘Ambient Awareness’.
Ambient Awareness is described as the modern phenomenon of peripheral social awareness, an ecstatic-visibility propagated by constant contact and observation via social networking platforms on the internet, such as Twitter, Tumblr, Facebook etc. It is the ‘agora’ of our times, a presumed open space where paradoxically our ecstatic-visibility or more prosaically, our digital imprint, creates far greater opportunities for enclosure. 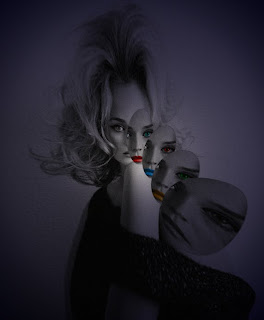 Ambient Awareness
How open can any of us be however? Is ultra or ecstatic visibility an end in itself and will it eventually overwhelm any type of inner contemplation? As Sloterdijk warns any ecstatic experience needs to be stabilised by an ‘standing-within-oneself’ or enstatic structure. Contemplation must be maintained.
Although having sidestepped the immediate ecstatic attractions of Twitter and Facebook, more from a fear of overt and sustained intimacy and a preference for enstatic experience, I am I believe, an enthusiastic participant in ambient awareness by blogging this blog. A reader once wrote that 'I wrote too fast for her' and another that 'I dance between the shadows' and both are true and as a consequence does not promote much in the way of ecstatic communication. However I remain a romantic at heart.
Clive Thompson in the NYT Magazine in September 2009 wrote about the paradox of ambient awareness,
‘Each little update — each individual bit of social information — is insignificant on its own, even supremely mundane. But taken together, over time, the little snippets coalesce into a surprisingly sophisticated portrait of your friends’ and family members’ lives, like thousands of dots making a pointillist painting.’
I am not so sure! Ecstatic visibility, or ambient awareness, or Twitter feeds, or Facebook friends are indeed pointillist, made up of hues or part-emotions which stand alone, but much as we would like to imagine them blending into each other, fusing into a sophisticated existence, they do so only as an optical illusion. 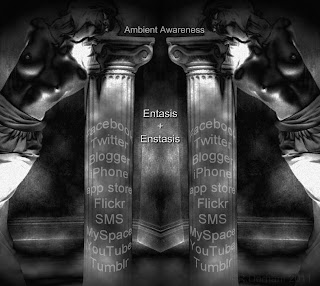 And this brings me to Entasis!
Entasis is the external convex curvature introduced by the earliest masons, into tall supporting columns, which overcome yet another optical illusion, that of the columns narrowing the space between them as they rise. It also promotes also a bulging of the middle of the column, which has been found to give additional structural strength. Entasis
Entasis would probably be a better way of understanding the platforms of modern internet communication and how their self-promotion of structural integrity guarantees an apparent ecstatic experience or openness. This promise is contrived however and the ‘ecstatic visibility’ experience is achieved by a ‘fuzzy logic’ illusion rather than ‘invisible’ contemplation and genuine structural support.
It is also true to say that human existence may always have been predicated on an illusion of that existence, only now that illusion must be sustained by a maximum of 140 characters!

Have an ambient and ecstatic 2011.
Further Reading: http://blog.fabric.ch/index.php?serendipity%5Baction%5D=search&serendipity%5BsearchTerm%5D=ecstatic
Posted by Roger Derham at Sunday, January 02, 2011