Rihla (Journey 34): Palermo, Sicily: A BRIDGE TO NO PLACE (UTOPIA) AND ANYPLACE

This rihla is about Palermo, Sicily. 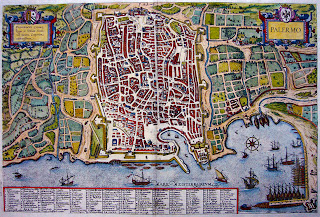 For all travellers, the journal, the rihla, is a rational account of what is and the occasional wistful thought of what might have been. And yet there are the occasions in those journeys when at the back of one’s mind, both in dreaming and in wakening, there surfaces a faint hope of discovery of what could be; a Shangri-la, an earthly garden of paradise, an Eden: a utopia. 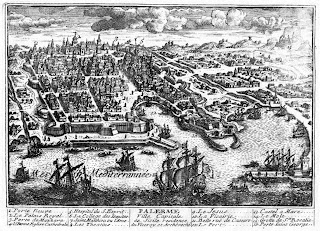 As I disembarked from the train I had taken from Cefalu all expectations of Eden evaporated. Modern Palermo, one of the fifteen Italian cities vying for the European Capital of Culture in 2019, is as one writer stated an ‘urban paradox’, notable for daily water rationing, endless traffic congestion, magnificent mosaics, apocalyptic slums, dark looks, radiant smiles; a place that is nowhere and everywhere.

Palermo has at times been Phonencian, Carthaginian, Greek, Roman, Byzantine, Berber, Arab, Norman, German, French, Spanish, Austrian, American even and Italian but at all times it has been Sicilian. But all hopes were not lost as I turned left on the Corso Tukory to approach the Norman Palace of Palermo from the cloistered gardens of the red-domed San Giovanni degli Eremeti. As I stood in the luxurious garden looking up at the palace walls I thought of Plato’s 5th century BCE work the Republic, thought to have been set in Sicily, and of the words of another traveller, Ibn Jubayr (Abu’l-Husayn Muhammad B. Ahmad B. Jubayr al-Kinani 540AH/1145CE – 614/1217) from Valencia in al-andulus Spain who arrived in Palermo in 1185 on his return from a pilgrimage to Mecca. He described Palermo as,

“the metropolis of these islands, combining the benefits of wealth and splendor, and having all that you could wish of beauty, real or apparent, and all the need of subsistence, mature and fresh. It is an ancient and elegant city, magnificent and gracious, and seductive to look upon. Proudly set between its open spaces and plains filled with gardens, with broad roads and avenues, it dazzles the eyes with its perfection.” 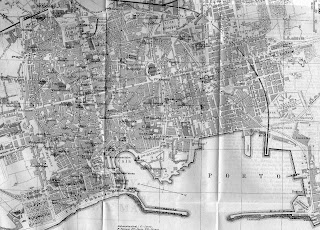 The Norman Palace (Palazzo Reale) from the outside is like a foreshore rock, with the red lobster-like San Giovanni scavenging nearby, and with limestone barnacle-like encrustations of Byzantine, Arab and Norman structural architectural features. And circling round it like eddies are the tides of human and automotive movement, waxing and waning with the hours. But once inside those walls you are in wonderment.

For here in Norman Palermo was the Omphalos, here was where in the mid-11th century CE of our time, instead of Rome, or Constantinople, or Jerusalem, or Damascus, the world had its navel… where nowhere and everywhere merged. 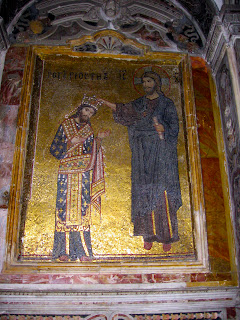 For here on this tidal rock of time existed Roger II, King of Sicily (1095 –1154CE); multi-lingual in Latin-Italian, Norman-French, Greek and Arabic; founder and participant of the Academy of Geographers where al-Idrisi compiled his great geographical work the Nuzhatul Mushtaq (The Book of Roger); here was where Roger II formulated the first medieval secular (Ius commune) codification of law, that was to be issued as the Assizes of Ariano, the foundation-stone of European Law today; here was where Roger II introduced the mandatory registration of physicians and of their training; here was where all members of the society Muslim, Jew and Christian were encouraged to participate; here where the administration of the realm was conducted in trilingual Arabic, Greek and Latin: here where upon his coronation Roger II commissioned what must be the most glorious small chapel in the world, the most thought-provoking vision of utopia, the Palatine Chapel. 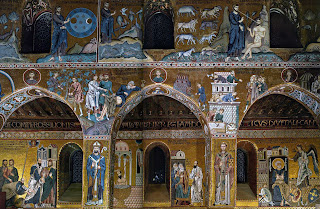 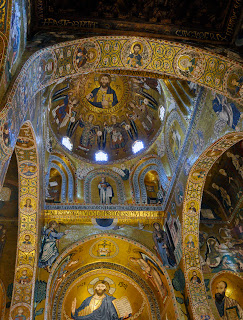 You walk along the first floor balcony overlooking a courtyard and almost in semi-darkness you exit the light of day into the almost perpetual light that suffuses the three-aisled small Byzantine shaped chapel. Ahead of you is the Royal dias above which the Christ Pantocrator dwells in brilliant mosaic. It is thought that the artisans who created these mosaics had been first brought to Sicily by Roger II’s Emir of Emirs (Ammeriglio, Chief Chancellor) George of Antioch to decorate his own church of the La Martorona further down the Via Vittoria Emanuele.

Roger II was no saint, and George of Antioch was his chief architect of both chaos and order.

It is the ceiling of the chapel however that captures the imagination most. Influenced by Seljuq design it is composed of 24 small and 20 large cuppolas carved from panels of Abies Alba and Nebrodondis (Silver and Sicilian Fir) and Cedar, the low resin content of which has prevented over the centuries too much cracking and also allowed the original painting of the panels. 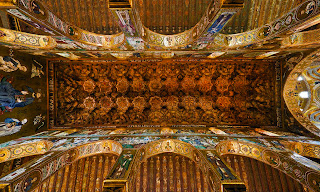 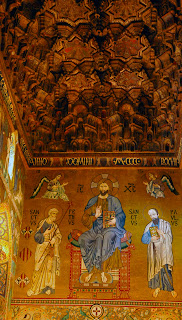 Leaving the Norman Palace you walk northwards towards the sea to Palermo Cathedral where Roger II is entombed in the purple porphyry of emperors. The Via Victoria Emmanuele is the cardo maximus of Roman Palermo and you have to remind yourself that this was once a walled city in which there were nine gates.

The recently discovered 11th century Arabic manuscript entitled the Book of Curiosities of the Sciences and Marvels for the Eyes describes Palermo before the Normans captured it,

“As to al-Qạr (‘the Citadel’), which is inseparable from the Old City, and its gates: the most famous is the Bāb al-Bạr (‘the Sea Gate’), because of its proximity to the sea. Close to it lies the Bāb Aḥ mad ibn Abī al-̣asan Ạmad ibn Abī al-̣usayn. Next is the Bāb Shantaghathāt (‘the Gate of St Agatha’ ), which is an ancient gate . [Then comes] a gate which was created by Aḥ mad ibn [Abī ] al-̣usayn, where there is an excellent spring [which powers] many mills. [Then come:] the gate called Bāb Ibn Qurhub; the Bāb al-Abnā’(‘Gate of the Buildings’), which is the oldest of [the city’s] gates; the Bāb al-Sūdān (‘the Gate of the Blacks’) opposite the blacksmiths; the Bāb al-̣adīd (‘the Iron Gate’ or ‘the Gate of Iron’ ), from which is the exit to the Ḥ ārat al -Yahūd (‘the Jewish Quarter’); and another gate near to it which was renewed by Abū al-̣usayn. The total number of gates is nine. This city was originally a long rectangle, with a market from its east to its west, but it was subsequently built up and became circular.”

The anonymous writer goes onto say that because of being ruled by the Zodiac constellation of Leo that the city is difficult to govern,

“The astrologers claim that [when] the House of Leo rises obliquely, it exercises, despite its reputation for beneficence, malign influence so that in every land in which it is influential, it is difficult for the ruler to govern. And it [Leo] rules over Samarqand, Ardabīl, Mecca, Damascus [and Palermo]. These cities do not suit their rulers and their rulers do not suit them.” 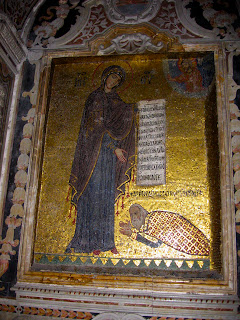 Close to its middle point to the east of the intersection with the Via Macqueda, the old Decumus Maximus, are the twin foundations of the two great Norman Emir of Emirs (Ammiraglio – from Amir al-reale – Commander of the Royal Galleys), the S.Maria dell Ammiraglio or La Martorona of George of Antioch (d.1152) with its wonderful mosacics (and where the Albanian Byzantine rite is still in use), and the smaller San Cataldo church of Maoio of Bari (d.1160). These two small but special buildings belie the importance of their founders to success of Norman Palermo.

Continuing along the Via Maqueda takes you back towards the train station, but before leaving for Cefalu I skirted north-eastwards along the Corso dei Mille to a perfectly formed Norman-Arab bridge built by the same George of Antioch in 1140 to cross the river Oreto but now sitting high-and-dry in a park dedicated to Garibaldi.

I sat there for a while and thought of George and Roger II and what they had achieved.

It was Roger II’s grandson Frederick II (crowned King of Sicily at the age of 3 in 1197, and Holy Roman Emperor in 1220) who as another extraordinary precocious medieval intellectual was called Stupor Mundi or Wonder of the World by contemporaries. But he stood on the shoulders of his grandfather for whom that epithet should have been reserved. For all his achievements Roger II of Sicily was always considered by imperial northerners to be no more than a first generation robber-baron, a crusader against fellow Christians who had carved out a kingdom for himself by force of arms and manipulation of the papacy. This is true but in contrast to many other such men it was what he then did next with that Kingdom that made it almost a utopian ideal, the nowhere and everywhere of the world.

The anniversary of Roger II’s death is on the 26 February. 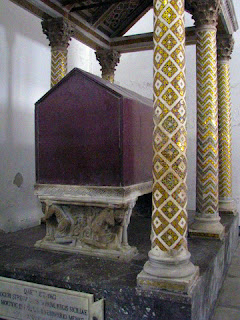