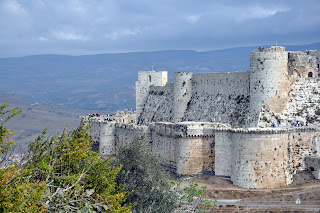 On the 9th October 2010 I rested in the shade of the Gothic-style Loggia building of the famous Krak des Chevaliers ( Qalaat al-Husn) castle to the west of Homs in Syria. On the hoodmould of a vaulted arch window of the late (mid-13th C) addition to the famous crusader stronghold was a carved Latin inscription, which is generally translated as:

“Grace, Wisdom and beauty you may enjoy but
beware pride which alone can tarnish all the rest”. 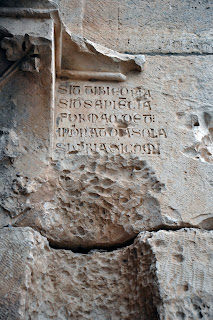 It is a poignant message across the centuries from a contemplative mason of a soon to be eradicated crusader Syrian kingdom of the past to the Syrian government of today. 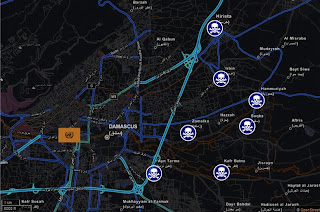 In the early hours of the morning of the 21 August 2013 a series of attacks involving chemical weapons were used on a number of towns in the Ghouta agricultural belt to the east of Damascus. The town of Zamalka was most affected with reports of up to 1000 casualties with many of those being children, murdered while they slept and the collateral deaths of many of the medical staff who rushed to treat the victims. 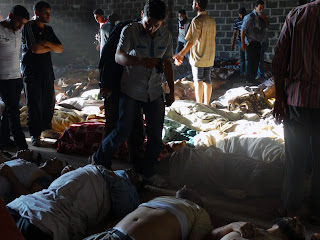 Responsibility for the atrocities was bounced back between the rebel Syrian Free Army and the government of Prtesident Bashar al-Assad and in trying to make a determination of the nature and cause of attack the professional chemical experts of the international community, led by the UN’s chief weapons inspector Angela Kane, were immediately blocked by the Syrian government from entering into the affected towns, telling them it was outside the territories defined by their mandate.

The Ghouta agricultural belt is the main provider of food for Damascus and if the attack was perpetrated by the Syrian government then it is a policy akin to the “scorched-earth” gambit of retreating armies over the millennia. It was in the past and is now a sign of acute desperation and implosion dictated as much by panic as by wind-direction. If on the other hand the chemical attack was perpetrated by rebel factions as a “necessary” expedient to orchestrate the international community and particularly the USA into directly intervening in the Syrian conflict, then whatever the outcome of the conflict is the legacy of Zamalka will ensure a perpetuity of recrimination and an abortion of any hope for a better future.

A specific concern in the “problem” of Syria, and indeed most of the middle-east at present, is how the implosion of the traditional tribal strong-arm governance model and the extraordinarily aggressive internecine Islamic confrontation should be tackled. The explosion of a myriad of external professional experts (government, military, human rights organisations, medical and refugee care organisations etc.,) trying to resolve the “problem” creates a problem in itself.

In a 1977 essay entitled Disabling Professions by Ivan Illich, the multi-lingual anarchist philosopher and Roman Catholic priest who died in 2002, Illich wrote that, ‘Professional environments are the last refuge of addicts to remedies.’ I was given the essay by a colleague recently and Illich’s searing condemnation of the abuse of “experts”, within society, where increasingly the ‘value’ of a direct witness to truth is subverted by the professional ‘truth-analyst’ whose hearsay interpretation is given more weight.

Illich identified at the beginning of the essay the mid-20th C as the ‘Age of Disabling Professions, an age where people had “problems”, experts had “solutions” and scientists measured imponderables such as “abilities” and “needs”.’

On a grand scale Syria, and the greater middle-east beyond, is and will be for many years a “refuge of addicts to remedies.” It is now too late to help the people killed by the atrocities in the villages and towns of the Ghouta but it has sharply focused the experts efforts to try and prevent something similar happening again. If the mid-20th C was Illich’s age of Disabling Professions then the early-21st C is the age of the Threat of Weapons of Mass Destruction and of the fears and need for a remedy it creates (or promotes) in our society. The use or implied use of non-nuclear but equally devastating WMDs (nerve gas, biologic agents, weaponised civilian aircraft etc.) has created a need that the experts have addressed by advocating the war in Iraq and entrenching the US imperium under the umbrella of ‘Homeland’ anti-terrorism measures.

I have to admit that I am one of Illich’s “addicts” or medical-science individuals who are remedy-driven and who in identifying a “problem”, or what might be perceived as a negative “outcome” that requires solving, would embark on trying to analyse the factors (blissfully ignoring the very notion of “imponderables” ) that might influence that outcome, and following this analysis then ascribe a certain predictive statistical weight or probability to that factor. In doing so of course I gradually become an expert on “imponderables”, and on the solutions to a newly identified “need” thereby perpetuating the “illusion” that Illich decries.

One of the primary tools of this professional expert-generating analysis is Logistic Regression Analysis, the basis not only of medical science but now also of war games, economic modelling, and estimates of collateral damage.  In its binomial essence death or life, win or lose, wealth or poverty, provide defined outcomes. One good piece of regression analysis research can make someone an 'expert' for life but it flounders when confronted by imponderables.

Syria is a case in point.

What model can determine the probability that because you are Alawite you will use a weapon of mass destruction? What analysis can incorporate the fact that your religious practices are suspect by orthodox Sunni and main stream Shia alike, that those practices originally developed in secret as a result of the Ottoman Sultan’s Selim I orders to his general Yunus Pasha in 1512, before he set off to confront the Safavid Persian Emperor Ismail I, to exterminate all Alawite and Alevi disciples of the Safaviyya missionaries of 14th C Sadr al-din Musa, in Ottoman territories and that as a consequence 400 years later because of your religion you remained the most-marginalised and economically deprived community within the Ottoman Syria. 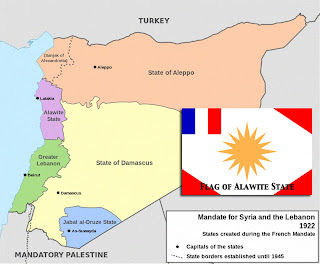 What logistic (or even logical ) analysis could have predicted that one of the first acts of the French General Maxime Weygand (himself the bastard son of a General  Van der Smissen and Mélanie Zichy-Mitternich, the lady-in-waiting to Empress Carlota of Mexico, who was brought up by a Jewish family and yet became a strident anti-Jewish enforcer of Vichy France’s German appeasement) on his appointment to the French mandate for Syria following the Treaty of Sevres of the 10 August 1920 was to confirm the secession of the ‘Territory of the Alawites’ in 1923 as a first step to the establishment of the Government of Latakia in 1930. Who can determine the probability effect on the current crisis of the French arming and training the Alawite minority in the 1920s as a foil to the majority Sunni that would ultimately result in highly-trained Alawite army officers such as Hafez al-Assad first joining and then dominating the Syrian Ba’ath Party in the 1960s and Syria thereafter? 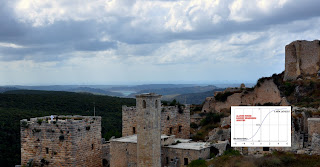 What is almost certain however is that the “experts” who are now contemplating military intervention in Syria have determined the probability of the factors that will influence the yes/no outcome of a  Latakian Independent State (including Tartus where Russia has its only naval base outside of Russia) being declared again where the Alawites and the al-Assad regime, following an inevitable if protracted destruction of the present Syrian state, will retreat to and wait once again. Even for 400years! 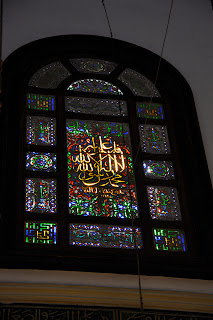 Window in the Great Mosque in Damascus, Syria.

It is perhaps completely redundant given the atrocities of last week that any other aspect other than an intervention to prevent further loss of life could be considered but even in the depths of the crisis  there are the imponderables of human existence that regression analysis cannot never fully compute: grace, wisdom, beauty and the deceit of pride. It can only be hoped that the Syrian people will soon have the opportunity to experience these again.