The Simurgh and the Nightingale (Part 11) 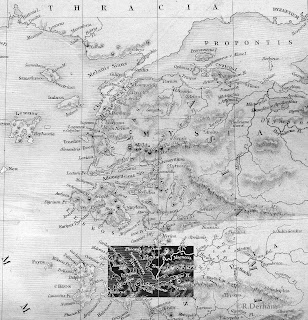 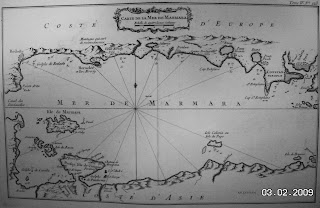 It was nearly sunset when Martino’s ship finally rounded the Seraglio Point to enter the Golden Horn and the very busy outer harbour that lay between Galata and the city of Constantinople. Catherine could feel the boat shudder as its two bow anchors scraped along the bottom before finally holding fast. This caused the ship’s stern to swing slowly with the flood-tide towards the Arsenal. A small tender drew alongside and Catherine could make out the liman reis of the port telling Martino that he could land his cargo at the Custom House in the morning but that nobody was to disembark that night. As Catherine watched the tender pulling away she rubbed her eyes and her thoughts drifted back over the last part of her journey. She murmured quietly to herself. “Be patient. Only one more night.”
It had taken longer than expected to enter the sea of Mamara for the final stage of the journey to Constantinople. After leaving Smyrna their ship had lost the favourable wind and it had been nearly four days before they rounded Janissary Point to enter the Hellespont. Catherine had been very surprised by the amount of sea-traffic that hitched the currents on either shore and it took a great deal of manoeuvring to enable them to reach the narrows between the imposing castles of Sultaniye Kale and the Kilitbahir Kale. Here they had remained anchored in the harbour for three days compulsory quarantine and inspection of their goods. Neither presents from Martino or the sulky irritation of Murad Corbasi would hurry the port official’s bureaucracy.
After being allowed leave the quarantine harbour - and avoiding the dangerous rocks marked by the lighthouse near Gelibolu - they eventually entered the Mamara Sea proper. As Martino pointed his ship close to the island of Mamara Adasi, Murad had pointed out the galleys loading cut stone for the ceaseless building work going on in Constantinople. From there they had made for Rodosto where some of their merchandise was unloaded.
Martino appeared to be in his element in this unusual city of synagogues, lording his sea-borne prosperity over his shore-based exiled Andulasian fellow believers. Finally they had entered the Bosphorous but appeared despite a favourable wind to reach an impasse just before the Seraglio Point. Catherine had been amazed to see ships with full following winds coming from both directions suddenly lose their momentum. It had taken many hours to navigate the last half mile but it had given her all the opportunity to marvel at the city’s imposing and beautiful presence.
The cacophony of noise emanating from the hundred minarets of the west bank and the Christian bells of the east bank carried on the still evening air. All around them there was tremendous activity on the water as numerous small craft darted across the waves. The Greek caramusals and caiques with grain, the gebes with sheep and the many tartans, frigates and Genovese polaccas arriving with their full holds to feed the insatiable appetites of this the world’s most glutinous city.
Everywhere was evidence of the city’s ordinary inhabitants winding down the day’s business. For some like the fishermen who were being collected from their hazardous pole perches - where they had watched for shoals of fish - today had been no different from any other. A better catch perhaps but then there would be lean days. What was important was survival and duty. On the Galata shore the karatia nets were been withdrawn by their long yards into the houses. One of the Greek boats - free of all taxes as a result of their ancestors’ services to Mohammed the Conqueror - was landing a dolphin caught among the islands. Tomorrow it would become the Sultan’s medicine.
Small ferries powered by between four and eight perspiring oarsmen - not all free to bargain their labour - were returning many of Galata’s foreign residents at the end of that day’s struggle with the multitudinous layers of official Ottoman bureaucracy. The obvious frustration was etched in some of their faces. Other boats and oarsmen were straining against the fast flowing Bosphorous to make their way to Scutari on the Asian side. These ferries had mainly Turkish passengers and the heavily jewelled turbans of some of them sparkled in the last embers of the dying sun.

Her thoughts were interrupted when one of the ship’s crew, who was busily belaying a loose halyard near to where Catherine was standing, excitedly pointed out to her the boat of the chief of the Imperial ice-porters as it made its way filled with compacted snow from the Anatolian highlands. This was destined - the sailor went on to inform her - for the palace kitchen. Catherine remained there watching for some time before retiring to her cot. With the night closing in fast a slight breeze got up to cool the air and by the time the muezzins had completed the asha’ prayers the minarets and the city had became strangely silent. What noise there was - apart from the creaks of the ship’s timbers beneath Catherine’s cot - came from the distant occasional barking of disturbed dogs and from agitated animals on late arriving boats. Near midnight however there was a loud cannon roar and Catherine - who had not in any event been able to sleep - came back up on deck to find Murad staring at the city’s glittering lights. “What was that cannon for Murad?” Catherine enquired in a quiet voice as she joined him at the gunwale.
Overhead disturbed birds were returning to their roosts. On a nearby gebe the horses onboard were clearly agitated and their whining cries took a long time to settle. The sharp crack of a whip bullied the silence back.
“Somebody has been executed. Probably on instructions from the Serai given the late hour of the cannon.” Murad spoke in a detached manner. The night air became suddenly colder and Catherine shivered. She waited for him to explain. “When somebody of noble rank or importance is dispatched, usually by strangulation, the bodies are then placed in a sack which is weighted and thrown into the Bosphorous at night. Women are less lucky as they are usually put in the sacks alive. The cannon acknowledges the deed.”
Catherine stared at the dark waters. “Murad. Does this callous disregard for life, ever bother you?”
The corbasi’s dark skin rendered him a barely visible dark shadow. Suddenly the flashing eyes caught what light there was and focused with a blazing intensity on Catherine.
“Mashallah! Never! We all have our duties and our destinies. Whatever happens is already ordained. The threads of time that we weave for ourselves can unravel in an instant.” Murad paused for a moment as if regretting his outburst. He relaxed his strident tone. “I must retire to prepare for tomorrow’s disembarkation. I will be leaving at sunrise. Somehow I know we will meet again Surgeon Cullen and until then I wish you the protection of Allah’s angels. Good night. Ma’as-salama.”
“Fi aman Illah, Murad. Thank you for your kindness.” Catherine called after him as she watched him descend to the hold below.
Pulling a linen shawl tight around her shoulders she turned once again to stare at the city of fireflies. The light from the necklace of braziers placed at intervals along the city ramparts reminded her of the Towers of Kilitbahir and the nearby ancient site of Sestos which they had sailed past in the Hellespont. There Leander and Hero had consummated their love until one night the guiding beacon failed and he drowned, dashed against the rocks. The thought made Catherine suddenly think of Djivo. She looked up at the night’s constellations.
“Orion watch over my love. Let him come to me soon.”
©R.Derham 2001,2009
Posted by Roger Derham at Thursday, February 19, 2009