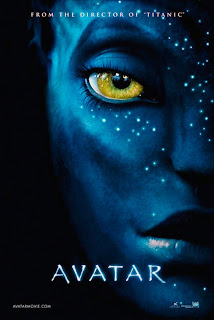 I went with my daughter to see Avatar on Sunday evening. I bought the tickets and she the sweets and ice cream. A fair deal! The movie was worth seeing albeit about a half-an-hour too long.
James Cameron, the director, was determined that every cent he spent on the graphics depicting tame flying reptiles dropping precipitously with their umbilically – called shahaylu, the bond – attached riders from cliff faces would be seen.
Despite the expense about every section of American society from religious fundamentalists to gung-ho neocons will be pissed off at some point by the story. In particular the private security firm employed to be protective for the ‘skypeoples’ mining colony – for the rare mineral Unoptanium sic! – are depicted as becoming aggressively and murderously pro-active and immediately Blackwater USA – now renamed Xe after a year of internal searching it seems – and Iraq spring to mind.
For the religious the chief scientific antagonist to the military boys is a Dr Grace Augustine. There is nothing north african or confessional about this girl. The forest glade sex scene (aka Braveheart) is abbreviated for the 12A audience yet somehow the whole controversy of avatar sex on the internet, particularly in the gaming Second Life system where teenage kids construct their avatars with detachable and oversized penises, is alluded to. Wow. All bases covered then.
And product placement too. Oh yes even in 3D. The Dick Cheney character, administrator Parker Selfridge, uses Titleist golfballs while plotting the destruction of the forest peoples. Not a Nike in sight then. Where is Tiger when you need him? Into the Woods with the rest of the cat people I suspect!
The feline connection in the construct of the central characters of Avatar, the omaticaya clan, is interesting in that the fourth avatar of Vishnu’s incarnation in the Hindu cosmology is Narasimha, the half lion-half man incarnation known for his ‘divine anger’ and as the great protector. 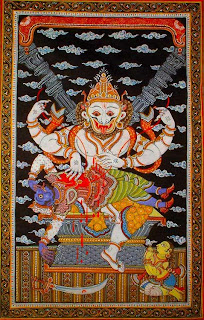 The movie is finally and indeed entirely an ode to James Lovelock’s Gaia Hypothesis, the integrated single organism structure of our planet named after the Greek mother goddess of the earth. (Also it must be noted the name of an internet avatar community) It ends a little too predictably or with the need for an optimistic feelgood goaway now message. Jake the central human character, the ‘dreamwalker’ or ‘avatar driver’ depending on perspective, in one of the last lines of the movie says :
The forest will heal, and so will the
hearts of the People. New life keeps the
energy flowing, like the breath of the
world.
I'm not so sure! 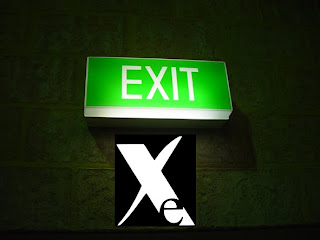 The 3-D effects are reasonable although the glasses distributed allowed in too much glare. We were sitting near the exit and the green box exit sign kept intruding on my peripheral vision. All I could think of was Xe instead of Exit and the how the Iraqi community was exposed to rape, murder and torture by these Blackwater ‘security’ personnel. Blackwater were/are Avatars for the neo-con agenda.
http://en.wikipedia.org/wiki/Gaia_hypothesis
Posted by Roger Derham at Tuesday, January 19, 2010