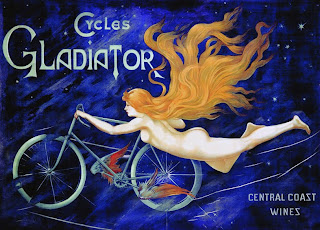 I recently came across a quirky blog called Cycle Chick from Copenhagen, dedicated to an advocacy of all things bicycle but particularly extolling the virtues of girls in high heels pedalling along the boulevards of cities around the world. What about men?
Over the past 15 years or so I’ve noticed a trend, where the cohorts of my male medical colleagues who are reaching the age of 45 or 46 suddenly turn to bicycles for their physical outlet both as individuals but also as part of a group dynamic. The bike is bought after much thought about construction, gear ratios, and brake specifications. The riding gear, for dry or wet conditions, with or with out Tour de France logos, are carefully chosen and as a final flourish, with the selection of a moulded racing helmet, man becomes gladiator.
Is this decision on the part of many of my male colleagues to return to the saddle a symptom of what is perceived to be a mid-life crisis? A return to the carefree days of their youth, when the bicycle took them away at speed from the watchful eyes of their parents, to meet up, race and be with their mates. Only now it is an acceptable escape from their spouses and partners, promoting the concept of cycling as an aerodynamic sporting pursuit as being excellent for their long-term health – and a diversion safer than other forms of male ‘man-o-pausal’ expression!
In the quiet moments however individual thoughts turn to Lance Armstrong’s testicular cancer, their own prostates and a choice of saddle. Do they go for the padded seat without the traditional perineal pressurising (a.k.a. crotch-crushing) protruding nose or decide to pad up. They will know that some urologists have blamed the traditional hard-saddle nose with cycling-related erectile dysfunction and impotence (see References below). 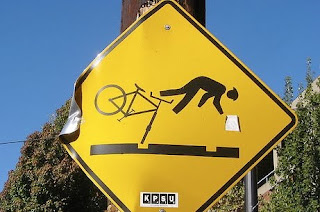 Now I have to say I never went around inspecting my colleagues bikes to see who was a ‘hard’ man but possibly impotent. Or who were those who were ‘padded’ but still performing. But I do wonder on occasions; on those rare days when I have nothing else to wonder about or sometimes, as a flash of spokes and lycra go whizzing by, I momentarily question 'Should I again?' (Truth be told about three summers ago I did get back on the bike on a glorious day and cycled to Spiddal and back. The next time I ventured out it rained for the entire journey and thus my phase lasted about two days.)
This intense mid-life cycling ‘perineal pressure’ phase for the majority of my colleagues appears to last for about two to three years and then fades out (or is washed out by Irish rain and terrible secondary roads) with a return to running, golf, tennis, drinking, normal function.
For some individuals however mid-life cycling becomes a way of existing. A way of believing in themselves: the lower the gear ratio the greater the penetration of being. Forget padded seats. These boyos have bicycle clips as body art adornments for greater satisfaction.
References: