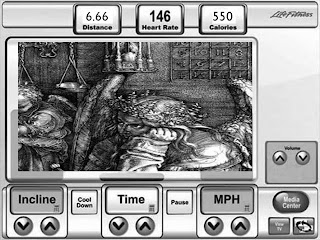 I do not get to the gym as often as I’d like and because there are significant ‘epochs’ between my attendances it is like a dead man walking as I approach the Lifefitness.Inc Elliptical cross-trainer. I aim for a 45 minute session (40 active and 5 cool down period), type in my weight while looking away, select the intensity level – basing this decision on the time of day, the lunar cycle, the colour of the leotard the ‘young one’ on the next machine is wearing, anything but a reality – and then press the random button.
I like the uncertainty notion of having to respond to a sequence of random events dictated by an inanimate machine. A series of troughs and peaks spread out over 40 minutes. Yet in time you see patterns. The machine is determined to punish you in the third quarter, the intensity and demand on your fitness at its most stretched.
You pick indices to survive. The 10 minute quarters, the distance in kilometers travelled, the circuits completed. Everybody is different. A colleague at work the other morning, a serious long distance runner, says he spells out in his head the signage that he passes or sees. For me on the elliptical death ride the most important sign that end to my torment is nigh is the approach of the Devil’s Number – 6.66 km. From there it is down hill to an average – for those of you who might be nosey about a 53 year-old’s capabilities – of 7.5km travelled, 1850 meters climbed and 550 calories burnt.
The Devil’s Number originates in John’s Book of Revelation, the last book of the New Testament. Written about 90 C.E. it states:
And that no man might buy or sell, save he that had the mark, or the name of the beast, or the number of his name. Here is wisdom. Let him that hath understanding count the number of the beast: for it is the number of a man; and his number is Six hundred threescore and six.
In all likelihood the number of the ‘beast’ referred to is probably not the Devil but most likely the perceived devil incarnate of Domitian, the Roman Emperor at the time the Book of Revelation was written, and a man detested by Christians, Jews and Greeks alike for his persecutions. The number 666 is derived by counting the Greek numeral-letter equivalents (The numerology 'science' of gematria) of his coin inscriptions. When Hebrew gematria is applied the number 666 can be derived from the Aramaic version of the Emperor Nero’s name, another ‘beast’ of a man who endeared himself to his subjects!
You would imagine that this type of superstitious politico-religious cryptography would have no impact in the modern world. But it is not the case. About ten years ago Armenia introduced social welfare identity cards. A highly orthodox traditional society the debate about their introduction did not concentrate on the civil liberty aspect but centered on those cards, which might incorporate the Devil’s Number of 666 in the card identity numbers. The debate reached parliament and a solution was reached where those responsible for the introduction had to design computer programmes where the sequence 666 would be edited out.
I remember asking a friend of mine who was involved in the fraught negotiations concerning the cards introduction, when on a visit there in 2001, was there any problem with the sequence 999? He asked me what I meant? Well I said, a bit of 'devilment' rising in me, if when you showed your identity card if it was presented with the orientation to the giver rather than the receiver then the receiver would see the sequence 666 standing out. He said ‘Don’t go there. We have enough issues.’
I always wondered subsequently whether this possibility enforced the development of a distinct transfer etiquette on peoples’ card-handing-over behaviour in Armenia.
Like I said. I like randomness and the potential for chaos. Even if I am gasping for air!
Posted by Roger Derham at Saturday, January 23, 2010