High Dudgeon and Dungeons in Dubai

Think, in this batter'd Caravanserai,
Whose Doorways are alternate Night and Day,
How Sultan after Sultan with his pomp,
Abode his Hour or two and went his way.
The Rubáiyát of Omar Khyyám
Translator: Edward Fitzgerald
In my blog of 7 Dec 2009 I mentioned that Abu Dhabi controls most of the oil wealth in the UAE and it was hoped would come to the aid of the economic implosion in Dubai. I also expressed concerns that given the history of disputes between the al-falasi – to which the al Maktoums of Dubai belong – and the al-falahi – to which the al-Nahayn of Abu Dhabi belong – that it was uncertain whether Abu Dhabi would be rushing into help and if they did what would fully satisfy an al-falahi sense of superiority.
(The al-falasi and al-falahi are both sections of the Bani Yas tribe of the Liwa Oasis but who have their origins in Yemen, and who relate their geneology back to ‘Adnan, descendant of Kedar, son of Ishmael, son of Abraham.)
Now we know and it is high dudgeon in Dubai.
The Burj Dubai, the highest building in the world at 828m (2716) was opened this week and unexpectedly Sheikh Mohammed Bin Rashid Al Maktoum of the al-falasi renamed the tower Burj Khalifa (Pearl of the Successor) in honour of Sheikh Khalifa bin Zayed bin Sultan Al Nahyan, the al-falahi leader of Abu Dhabi (who possible unaware of this impending honour did not bother to turn up to the opening ceremony) . 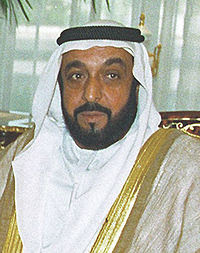 Sheikh Khalifa bin Zayed bin Sultan Al Nahyan
Imagine the joy in al-falahi hearts! The junior al-falasi tribal breakaway group in Dubai, who have been lording it for years, finally put in their places. Every Night and Day, as Omar Khayyam would have it, the al-falasi will see the tallest needle in their world piercing the sky of their hearts. High Dudgeon indeed! 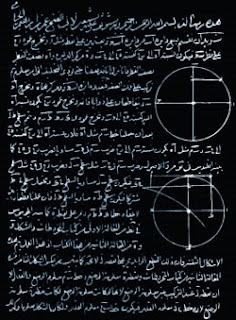 Omar Khayyam's Cubic Equation Solution
As an aside Omar Khayyam was a brilliant mathematician and without his approach to the solution of ‘cubic equations’ the Burj could not possibly have been built.
As another aside no one is quite sure of the origins of the word ‘dudgeon’ which is used to imply a sense of extreme indignation but in a strange twist of sound and circumstance, to me it equates in the Burj’s case to 'dungeon'.
High above the street the multi-millionaire owners of the Armani designed apartments will never have to leave the building. 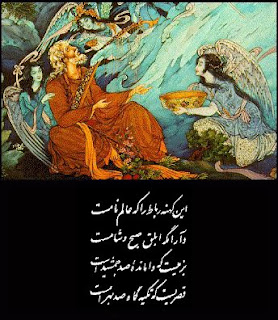