The Simurgh and the Nightingale (Final Chapters) 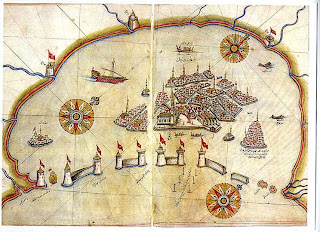 Chapter 42
Burano, Venice
10th June 1667
Most of the council members of the Constantinian Order had gathered earlier that day in the Comneno Palazzo. After a light lunch the Grand Master of the Order Angelo Maria Angelli Flavio Comneno - Prince of Macedonia and Tessaglia and Duke of Drivasto and Durazzo - welcomed them into the large room that served as their council chamber. He waited for all to take their seats before beginning to read - aloud - the recently arrived letter of Alessandro Zatta, the Venetian envoy or balio to the city and republic of Ragusa. The letter gave his graphic account of the devastating earthquake that had struck Ragusa -and other towns on the Dalmatian Coast- between the twenty-third and twenty-fourth hour on the sixth day of April in the year of Our Lord 1667.
“A citta di Ragusa posta nell’illirico versa la bocca del Golfo Adrriatico...”
Apart from the extraordinary description of the strange phenomenon where the harbour was seen to completely empty and then refill with three successive tidal waves the early part of the report did not appear to interest Comneno much. He skipped over many of the details before pausing to emphasise the section of the account where Zatta had noted - while documenting the destruction of the city’s Palazzo and the death of the Knez and twenty four other nobles of the Legislative Council - that one Dom Djivo Sorkocovic and his lady wife Katerina were amongst those killed. A tenth of Ragusa’s entire population, Zatta estimated, had perished in the earthquake.
When Comneno had finished reading the report he pushed the document towards the centre of the table. It slithered across the polished surface. He waited a moment to see if anybody reached for the letter before speaking again. “I am now convinced that the person we knew as Dom Djivo Slavujovic of the Sant’Iago Order was in fact this man Sorkocovic.”
One of the other council members suddenly reached forward and pulled the letter towards him. He read it with more emotion than the Grand Master had shown and his face flinched and an eyebrow lifted at the recognition of a familiar name or place.
Angelo Maria watched him and waited, somewhat impatiently, until the man had finished. “I have also received a further report from one of our Order’s own spies in the city. He managed to search through the rubble of the Sorkocovic house but there was no apparent sign of the Scrolls. He relates, however, that in the immediate aftermath of the earthquake many peasant looters had come down into the city from the outlying villages and were still there two days later when he arrived. Everything was in chaos and what was not in ruin was burning. He even reports encountering and being chased off by a peasant group, led by a black slave-woman, who were sifting through the charred remnants of the Franciscan convent library.”
Comneno paused for a moment and reached into an inner pocket of his tunic. “This was all he could recover from Slavujovic’s house.” He placed a jewelled dagger on the table. The sheath was missing and the blade tip was broken.
The council member who had re-read Zatta’s letter a little time earlier lifted the knife and noted that many of the bigger jewel sockets were empty. He looked at Angelo Maria. “We were never certain brother, that Djivo Slavujovic or Sorkocovic as you now call him, still had the Scrolls.”
The Grand Master appeared to be distracted, lost in his thoughts, and there was a long pause before he answered. “True brother. But if he did, the secret has died with him.”
Marco Comneno - the Constantinian Order’s Grand Prior in Constantinople - continued to run his finger along the curved edge of the blade. “It is probably for the best. His lady wife Katerina Cullen, was quite an extraordinary woman.”
Chapter 43
Artillery Walk, London, England
2nd Sept. 1667 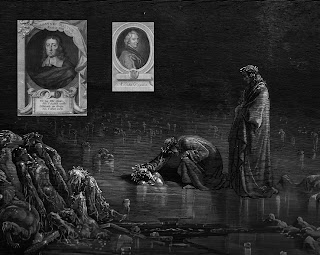 “Mammon led them on-
Mammon, the least erected Spirit that fell
From Heaven; for even in Heaven his looks and thoughts
Were always downward bent, admiring more
The riches of Heaven’s pavement, trodden gold,
Than aught divine or holy else enjoyed,
In vision beatific...”
The round faced man -with the high wig of the times- stopped reading aloud as the woman entered the room. She spoke in an apologetic voice,“I am sorry Mister Dryden, but my husband is asleep and I will not wake him. He had one of his terrible headaches this morning.”
The visitor tried to hide his disappointment. “It is of no consequence Mistress Milton. I hope he is well soon. I will call again and pay my respects.” Dryden then left the book he had been holding back on the table. It was still open on the last page he had been reading from. He turned to the woman. “John must be happy that Paradise Lost has finally been published. It is a truly splendid effort.”
The woman blushed. “I must confess Mister Dryden, I understand very little of it. On the other hand I loved Nell Gwynn in your own Secret Love. It is nice to see real women rather than eunuchs in the female roles. Much more my taste.”
It was Dryden’s turn to be embarrassed. “Thank you Mistress Milton. It was gratifying that it was so well received. However. This work of your husband . . .” He pointed to the first book of the opus as it lay open on the table. “ This . . . this cuts us all out. And the ancients too!” Dryden lifted the book up again and began reading from where he had left off.
“. . .By him first
Men also, and by his suggestion taught,
Ransacked the centre, and with impious hands
Rifled the bowels of their mother Earth
For treasures better hid.”
Epilogue 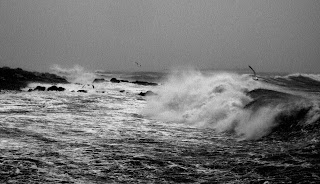 Murat Reis was finally released by the Knights of Saint John in 1640. He retired to become Governor of Oualidia in Morocco. In 1648 Murad Corbasi was one of a number of senior Janissary officers returning from the ill fated campaign against Crete who revolted and executed the mentally unstable Sultan Ibrahim brother and successor of Sultan Murad IV who had died in 1640. The hospital for the insane was never built in Tvanshanli.
In 1797 Napoleon abolished the position of Doge in Venice when he ceded the republic to Austria in exchange for Belgium. In 1798 he expelled the Knights of Saint John from Malta without resistance. In 1806 the Holy Roman Empire was disbanded by Napoleon as was the Republic of Ragusa the following year when he created his Illyrian Provinces. Finally, in 1809 Napoleon annexed the Papal States, disbanded the Inquisition and removed the compulsory internment of Jews in designated Ghettos.
In 1903 the private collection of books and manuscripts built up by Masseo Barberini, Pope Urban VIII, until his death in 1644 became part of the Vatican Library. 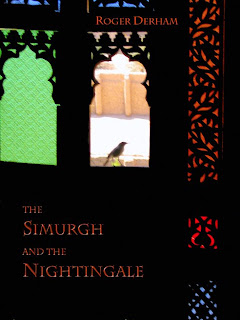