The Simurgh and the Nightingale (Part 27) 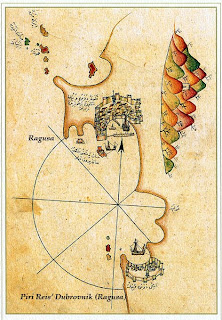 Chapter 41
Ragusa
6th April 1667
The four litter-men carrying the curtained chair lowered it gently from their shoulders to rest the base on the ground. One of them then drew back the curtain and helped Catherine step out onto the roadside. Although happy for the custom they all appeared equally eager to be homeward bound for their evening meal and fidgeted impatiently as they watched her walk towards the figure of an elderly man who was standing at the end of the small mole that jutted out from the base of Saint John’s fort. He appeared to be mesmerised by the setting sun.
As Catherine drew closer the man turned and even now as he neared his sixty fifth year she was struck by his handsomeness. Although slightly heavier about the jowl and paunch Djivo still had the bearing of her warrior lover. She could not be angry with him. “Djivo. I knew I would find you here. You should have been home some hours ago. We are due at the Knez’s palace for the reception.”
He smiled, disarming her completely. “Must we go? I would rather you stay with me here and watch the sun go down.”
Catherine pretended to be cross. “The Knez is your niece’s husband. Personally I can not suffer his pomposity but we promised her we would come.” 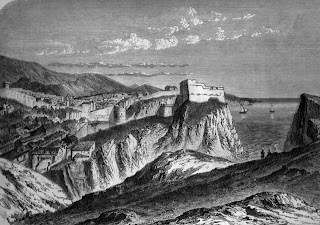 Djivo looked beyond her and held up his hand to the litter-men, asking for their patience a little longer. He then lowered his hand and wrapped it around her waist, pulling her close. As he did so he spoke quietly,
“I strive dear sweet - for Libya nor wild Thrace
Gave birth to me - to draw thee to this place
This, where warm winters and cool summers reign:
Washed with calm waters of the still-quiet Maine.
Here vacant life, here Peace her empire keeps:
Never disturbed Rest, unbroken sleeps.
No noise of Courts, nor wrangling strife of laws:
Old usage is their rule.”
Catherine snuggled even closer. All the cross words had deserted her. “Virgil? ” She asked.
Djivo laughed. “No. You heathen! It was written by Pampinius Stadius to his wife, inviting her to Naples.” He paused to look seawards. “I was thinking of my time in Naples all those years ago and how fortunate I have been in my life to have had you Katerina. My still beautiful Katerina.”
Catherine felt her eyes watering. “Come on you old fool poet. Flattery will not release you. We must not delay.”
They walked hand in hand like young lovers back along the mole to where the litter rested. Before ducking under the canopy to take his seat Djivo looked up at the sky. He spoke as he sat in beside her. “I have a sense of strange unease Katerina. It feels as if the sky is leaning heavily on us. Did you notice how few sea-birds were about? ”
Catherine felt the litter being lifted. She had also noticed on her way here from their house near ‘The Holes’ - the city’s granary - that there was a distinct quietness of the normal evening bird-song. Even her two pampered cats were nowhere to be found as she left. Catherine tried not to convey her own unease. “You are imagining it, my love. Perhaps a bad storm is coming.”
Djivo squeezed her hand. “Perhaps.”
The four litter-men strained as they took a route that took them along the city walls of the Karen and then up the narrow stepped street to the plaza where the Cathedral of King Richard the Lion-Heart stood. Dodging the evening worshippers they pulled along side the arched portico of the Knez’s palace. Ahead of them the ‘green-men’ of the clocktower chimed the twenty-third hour. Then, just as the litter was lowered, the ground it rested on appeared to tremble and just as suddenly went quiet again. Doves took to the air from the rooftops all around. Djivo stepped out quickly and helped Catherine do the same. “It is over. Here take my hand.”
They were just under the central archway when the second tremor hit. Catherine was thrown violently sideways against the base of the supporting column and could only watch as Djivo fell heavily as well. He struggled to get up, taking the strain on his one good arm. Suddenly the capital stone from the column nearest him suddenly caved inwards and fell towards the ground. Catherine looked on, helplessly, as if almost in slow motion, it crushed into the half-kneeling Djivo at the base of his neck and shoulders. With a loud snap and sickening thud the light went out of his eyes.
Catherine tried crawling towards him, reaching out with her hand to touch his fingers. She screamed with the intensity of a trapped animal. “Djivo. Djiiiiivo. . . Djii- ”
Her own cries were also suddenly cut-short as the whole archway, and indeed the entire series of arches of the portico, gave way to topple. Imploding they showered Catherine in a hailstorm of fatal masonry.
©R.Derham 2001,2009
Posted by Roger Derham at Friday, June 26, 2009