The Simurgh and the Nightingale (Part 25) 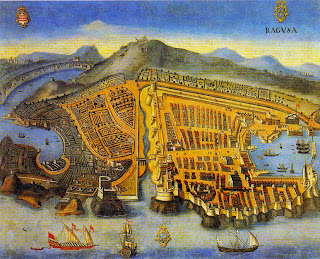 Chapter 39
Ragusa
10th January 1639
As Catherine sat at her bureau she strained to see through the small panes of the bay window that overlooked the harbour. It had been a bitterly cold night and the glass was frosted over, and she could just about make out the masts of the ships sheltering in the harbour. They appeared to rock in the biting winds that whipped across the waters. The door behind her opened with a loud creak and she turned to see Djivo bringing in a steaming glass of spiced Malmsey wine. Catherine noticed, as he walked towards her, that with each passing day his left arm appeared thinner and somewhat more withered than before. It hung there trapped in its sling, useless, the muscles and nerves destroyed forever by his fight with O’Driscoll. He ignored her concerned look and smiled at her indulgently. “What are you doing? ”
Catherine accepted the glass, delighted to wrap her cold hands around its warmth. She took a small sip and sighed approvingly. “I had promised to write to Seilim Zeitun Oglu with news of our safety and with instructions. I have just finished the letter. Would you like me to read it to you. It is in Arabic script.”
Djivo place his good hand on her shoulder and squeezed gently as he kissed her cheek and whispered in her ear. “Do you feel safe now, Katerina? ”
She nuzzled against his hand as she remembered their flight to freedom.
The Ragusan ship that had taken Djivo to Constantinople was waiting as arranged in the harbour below the Velvet Castle. It was a few days before he was strong enough to travel. Catherine had been able to do very little, apart from cleaning and suturing the skin wound, to help his shoulder and she knew it had lost its power forever. After leaving Smyrna they had made a brief stop at Chios before Catherine - with Djivo’s transferred power of ownership - instructed the Captain to make the long dash for Malta. Accompanying, for his own safety, them was Marco Angelo Comneno. The Aga Hakem al-Buda had wanted to kill Marco so that reports of what had happened in the courtyard of the Velvet Castle would not reach Constantinople and it was only after a tense period of negotiation and the handing over of most of Catherine’s savings that he was allowed to accompany them as their prisoner. Once on board she struck a bargain with Comneno. She told him that they would hand him over to the Knights in Malta if he gave an solemn oath not to escape. He did so and was almost a willing captive as she and he, spent many sailing hours in deep conversation.
Rapidly recovering some of his dignity and authority as they neared Valetta, Comneno had pressed her on the whereabouts of the Scrolls. Catherine told him firmly that they were safe and that when she thought it was time for them to be revealed, she would then, and only then, do so. He had asked her whether she read the Scrolls and was deeply disappointed when she indicated she had but sternly refused to discuss their contents. Catherine had brusquely brought that conversation to an end. “They are no longer the exclusive property of the Angelicks.” 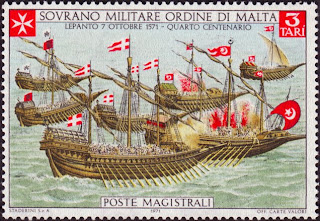 Later when he pressed her yet again, her patience wore thin and she had told him in no uncertain terms that he would be a better man and future leader of his Order if he followed the dictates of his personal faith and to let that path guide him rather than relying on the crutch of possible ancient secrets.
After anchoring in the harbour of Valetta, and despite displaying the patent and carrying the pratticke showing they were free of plague, they were told by the harbour authorities that they would have to wait in quarantine for forty days before being allowed disembark into the city. Djivo - by now recovered from most of his wounds - and Catherine did not seem to mind as they passed the days like teenage lovers. Arguments, giggles and playful teasing came in bursts of short lived moments.
Marco Comneno could only watch, the loneliness of his isolation made worse by their joy. It was a particularly hot and humid day when he approached them on the fore-deck, his mood soured by meagre rations of increasingly tasteless biscuits and beef. “Why did you deviate so much from your obvious course home to come here?” He spoke gruffly. “It was surely not just to release me!”
Djivo and Catherine broke away from the game of chess they were playing and looked up at the Venetian. It was Catherine who spoke. “You are right Marco. There is another reason and you are an important part of it. Please calm your irritation and join us.”
He sat down somewhat reluctantly, swatting away with venom his escort of flies. Djivo then continued. “We have a friend who is a prisoner of the Knights, and we are going to use you in part exchange for his release.”
Comneno bristled, his status as captive being suddenly reiterated. “What do you mean? Who are you talking about? ”
“There is a Dutchman called Murat Reis, an Algiers corsair captain, who was a good friend to us and who has been a prisoner of the Knights these past two years.”
Comneno spluttered. “A Barbary pirate! I am to be exchanged for a bloody pirate.”
Djivo smiled. “Marco stifle your indignity. We will be faithful to our word and will release you once quarantine has been lifted. However . . .” The Venetian relaxed a little, but waited pensively to hear the conditions that were surely coming. “The moneys that Catherine paid to obtain your release in Smyrna were to be used to gain our friend’s release. Your freedom is dependant on your promise to repay that money and you will swear to us, here and now, that you will do so by arranging to ransom Murat Reis from the Knights.” Marco Comneno was a man of honour and he nodded his assent to the bargain. Djivo smiled and held out his hand. “That wasn’t so bad was it. Now come and sit with me. I need your help. Catherine’s years in Constantinople have made her a better chess player than I. Maybe the two of us can take her down a peg from that smug perch of hers.” 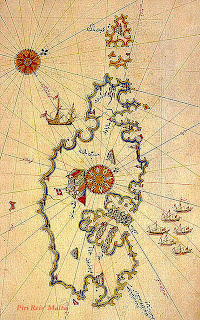 To all their relief the Quarantine period was shortened to twenty days thanks to the efforts of the local Ragusan consul. He also arranged with the Prior of the Aragon Alberge to effect an introduction for Catherine to the Master of the Hospitallier Hospital. This was to take place on Friday, when all of the ‘Great Crosses’ - the council members of the Order of Saint John - had completed their weekly duty of a day’s service in the hospital. The longboat took them to the tunnel that linked a small shore-side jetty with the Knight’s hospital high on the hill behind Fort Saint Elmo. They climbed their way upwards dodging the porters who were hauling ice-blocks from the boat that had arrived from Syracuse the same day. Shown into a small parlour they waited until sunset before being escorted to the Grand Master’s palace. It was here in the council chamber - its walls covered in the paintings depicting the great sea and land battles that the Knights had fought in - that the Grand Master Fra Giovanni Paolo Lascari Castellar and the sixteen councillors of State listened to Djivo and Catherine’s proposal. On hearing no objection from Marco they agreed to the arrangement.
The following day Djivo was taken to the prison to see Murat Reis. He looked unwell, suffering from the undulant fever peculiar to Malta. The visit was brief and at a distance and Djivo was to voice his concern that he feared for Murat’s survival. No wonder the Knight’s had so readily agreed. Once they heard she was a surgeon, the Master of the Hospital asked Catherine to visit the three nunneries of the island. These were uniquely distinguished by their inmates. There was one for virgins, one for repentant whores and one for innocent bastards. Djivo expressed his surprise when he heard later that the Virgin’s nunnery was the biggest. A local wit had told him that Malta was an island where you would find Turks and virgins in equal numbers.
It was two days later that Djivo and Catherine had set sail for Ragusa. A journey over and another beginning. Catherine brought her hand up and squeezed Djivo’s tightly. Looking down at the letter she had been writing, she resolved to sign it later. She stood up and turned to face Djivo. Her beautiful Djivo. “Yes, my love. Because of you.”
©R.Derham 2001,2009
Posted by Roger Derham at Wednesday, June 24, 2009