The Simurgh and the Nightingale (Part 22) 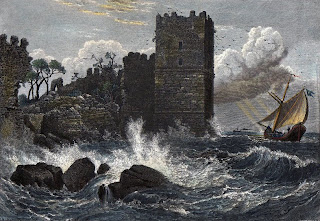 Chapter 36
Broussa, Anatolia, Turkey.
October 2nd 1638
As Catherine walked into the private room on the balcony floor of the mosque - known as the Imperial loge - her eyes were drawn hypnotically upwards, to stare at the ceiling. The gold-green double pentangle stars of the stalactite frieze appeared to fall from their mosaic heaven to meet her and the early morning light radiating from the giant cupola above the floor of the mosque forced her back into the shadows. To wait. 'Once again,' She murmured to herself as she dwelt on how her world had been torn apart almost as if all of what had gone before had never really happened. Catherine knew instinctively that the reality of this moment - beneath the pentangle stars of the loge - was an inevitable part of her journey but it had appeared from nowhere to obscure its destiny. ‘Had it only been yesterday,’ she wondered. ‘That Issac ben Jacob had made his unannounced and agitated appearance in the outer hospital courtyard of the Hassiki Hurrem? ’
Catherine had just finished her rounds of the sick-rooms and Issac’s arrival had caught her completely off-guard. Her joy at his news of Djivo’s safety and arrival in Constantinople was terminated abruptly by Issac's account of Djivo’s meeting with the French Ambassador de Cesy the previous night. She had known, there and then, that she would have to leave the city immediately and the realisation, surprisingly, had upset her greatly. Issac said he would make arrangements to hire one of the boats of the Greek dolphin fishermen and they would wait for her at the dock at midday. Djivo would follow later.
The next morning she had made her routine purchasing trip to the Egyptian market and taking just one shoulder bag, so as not to arouse suspicion, had first placed within it all her savings. This was a considerable weight of gold and silver coin - a testimony to her skills and the gratitude of her patients - and with the addition of the Scrolls and the book of Maimonaides, that Rabbi Jacob had given her in Smyrna, the bag was nearly too heavy to carry. By the time she had lost her eunuch escort in the thronged bazaar and made her way to the Phanar Gate she already had a large weal forming on her shoulder. She had saddened at the thought of her faithful eunuch and of his likely punishment when it was discovered she was gone.
Issac was pacing the dockside anxiously when she arrived. Boarding quickly they had sailed from the city, making good speed on the current that pulled them past the Prince’s Islands and then around the Poseidon headland of the Mount Arganthonios peninsula to land at the village of Trilya. The journey had taken nearly eight hours and as night was approaching fast they had decided, after eating, to accept the head fisherman’s offer of allowing them to sleep in an old farmhouse owned by one of his relatives. This had been conveniently hidden amongst the olive groves on the outskirts of the small anchorage. Issac had slipped away soon after they arrived only to return again some hours later.
She remembered sleeping fitfully and being awakened early by the sound of horses approaching the farmhouse at speed. Afraid to show herself she had tried to see what was happening through a small crack in the windowless wall of her room. It had only been when Issac called to her that she left the hut to be surprised by the presence of two siphai horsemen in the yard. Issac explained that he had sent a message the previous evening to Murad in Broussa and that the cavalry soldiers were from his command.
The siphai had brought two other horses for Issac and her to ride. They had been very impatient to return to Broussa and after watering the horses watched as she hurried a quick breakfast before remounting. She saw their surprise as, with the ease of the natural horsewoman she was, she swung herself into the saddle. She had taken her shoulder bag from Issac who barely concealed his curiosity at its great weight. Even now as she slid down the tiled walls of the Imperial loge to sit on the cool marble floor Catherine had to smile when she remembered the siphai refusing to leave the cottage until she had covered her face.
The journey had taken them first over the low hills - covered in olive groves and vineyards - just inland from the sea and then upwards through wooded ravines to reach the fertile valley of the Nilufer river. Here the fields still had plenty of uncollected water-melons rotting on the ground. Riding southwards they could always see ahead of them the majestic Bithynian Mount Olympus - called the Mountain of the Monks by the Ottomans - as it rose majestically skywards.
As they got close to the city of Broussa, perched on Olympus’ lower slopes like a glittering white pearl on a maiden’s neck, the mountain appeared to envelop them. Their escorts had brought them through the gardens of lilies and hollyhocks and she remembered the glorious mulberry and chestnut groves that extended right up to the very gates of the town. Riding on towards the eastern quarter of the city they had crossed the Blue Water river. The siphai had then left Issac and her to dismount in the small garden near the octagonal tomb of Mohammed I which was attached to the famous Green Mosque. 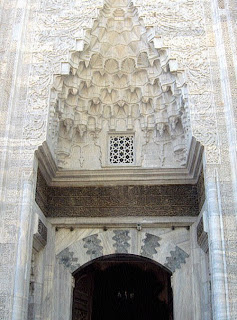 As they dismounted Catherine had seen that the faithful were leaving the mosque having completed the mid-morning prayers. After waiting for them to disperse she had walked over to the mosque with its beautifully green-tiled minarets. Passing the fountain she entered the cool vestibule with its ornate niches and turning right climbed the stairwell that would bring her to the women’s loge where she had intended resting. It was here that she had stumbled onto the open and adjoining private loge of Sultan Mehmet the First.
Catherine was still sitting there - lost in her thoughts and dazzled by the walls and ceiling that were covered in the most beautiful glazed earthenware and gold mosaic work - when a voice spoke softly from behind her.
“It is said that this loge was decorated by a Bektashi called Al-Majnun. So called because of the hashish he used while working on this room’s ecstatic expression of his faith.”
Catherine was startled from her reverie and turned to see Murad looking down at her. “Murad it is good to see you. Thank you for - ”
Murad stepped aside as another man rushed past him to lift Catherine from the floor and hug her tightly. “Katerina, my love.”
She wanted to scream out. He was as beautiful as she remembered him. “Djivo, I thought - ” She moved to kiss him but suddenly remembering where she was pulled back. He was puzzled by her hesitancy until she explained in a whisper. “Not in here my love. Let us go outside.” They held hands, squeezing tightly, as they descended the stairs and re-entered the bright sunlight of the fountain courtyard. Only then would she allow herself to embrace him fully. “My love for you has grown stronger with every day apart. Never once did I not believe that this day would come.”
There were tears welling up in Djivo’s eyes. “I am so sorry to have placed you in such danger.”
Catherine wiped away a droplet that was coursing down his cheek. “It does not matter. We are safe now and together at last.”
They were walking towards the Turbe of Celebi Mehmet when Issac and Murad rushed to their sides. Issac spoke. “Djivo. Catherine. We must flee from here urgently. O’Driscoll and a detachment of the Grand Vizier’s personal guard are combing the city looking for you. We are in grave danger. Djivo must have been followed.”
They all looked at Murad. ‘Was this not his city?’ They thought as they appealed to him. He resignedly shrugged his shoulders.
“I am sorry my friends. There is little I can do. The Grand Vizier Beiram Pasha is not a man to be crossed as thousands of my fellow Janissaries have already found out. In any event! Most of my troops have already left to join the Sultan’s Army at Bilejik as I have been honoured with a regimental command for the campaign to capture Baghdad. You will have to leave. Take the horses and I will arrange for a guide to take you by the mountain road south. May Allah travel with you.” He turned to go but then stopped, suddenly. “Catherine. May I have a word with you in private? ” She walked to meet him out of earshot of Issac and Djivo. “You remember Selim Zeitun Oglu from the tekke? ”
Catherine nodded. The memory of the sprightly old archivist’s warm welcome at her initiation brought a smile to her face. “Of course Murad.”
“His village is that of Tvanshanli on the route to Kutahya. I am sending Issac ahead and he will meet you at the sacred pond of the vanishing carp at Maimul. I do not know, nor do I want to know, why Djivo is sought but let me say that it is you that must decide which is the best way forward on your path of destiny. Remember me in your prayers. You will always be a light in mine. Farewell my muhib.”
Murad did not linger and mounting his horse sped towards the Hissar. Issac followed him. Catherine and Djivo were left alone, but little was said between them. It was not long before a solitary siphai galloped up and indicated for them to leave.
They skirted the southern walls of the city before joining the Souk Punar road to make the long climb that took them to the high plateaux. In the late evening they reached Barakli their horses exhausted. They decided to sleep in the open rather than attract attention in the small village. It was there, on the bank of a small river, its waters fed by the last snows of the great mountain, that Djivo and Catherine found each other again. Quietly.
©R.Derham 2001,2009
Posted by Roger Derham at Friday, June 05, 2009