The Simurgh and the Nightingale (Part 23) 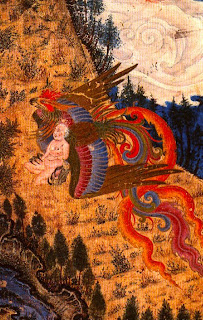 Chapter 37
Tvanshanli, Anatolia.
Oct. 4th 1638
As Djivo and Catherine descended into the village, the mountain path behind them disappeared into a dense early morning mist. Even if they were being followed it would have been impossible to tell. Ahead of them, standing beside the sacred fish pond, Issac and Seilim Zeitun Oglu were waiting, as arranged. Catherine saw that the older man was wearing the robe and crown, with its green istiva strip, of a Seyh of the Mevlevi Order. They greeted each other warmly and as Seilim helped Catherine down from her horse he spoke to her in urgent voice. “Come my child. We have little time and much to discuss.”
Catherine nodded and after whispering something in Djivo’s ear joined Seilim to walk the remainder of the way to Tvanshanli. The older man offered to carry her shoulder bag but Catherine shook her head. Issac watched them for some time before helping Djivo water the horses at a nearby han where they would stay the night.
The town of Tvanshanli was small, dusty, dirty and - it seemed to Catherine - devoid of all life apart from the occasional mangy dog. It was only as they neared the bazaar and it’s hubbub of noise that Catherine instinctively began to lift her veil so as to cover her face. Seilim stopped her. “No need for that Catherine. As the beloved pir Bagli once said - ‘Separating beauty and love would be a crime.’ ”
Catherine smiled and followed Seilim as he entered a round stone building near the central doorway of the bazaar. Once inside - and accustomed to the faint light from the cupola above - Catherine was amazed to see the stacked shelves of a library. There were a great number of movable bookcases containing – thousands she estimated – beautifully bound ancient and modern manuscripts and folios.
Seilim watched her eyes darting back and forth taking in the wonder of it all. “A hidden jewel in an ocean of ignorance.” He whispered as he moved forward to one of the bookcases and chose a manuscript at random. Bringing a pristine copy of ‘Attar’s Mantiq al-tayer - the Language of Birds - to a small low reading lectern Seilim opened it carefully, almost reverentially, to reveal a fantastic centrepiece illustration of many types of birds. Turning to Catherine he lifted his hands and rotated his wrists so that the palms were facing upwards in homage to the shelves. “This library has been my family’s responsibility for many generations. Much of the collection came from the great library at Cordoba, when it was sold off, and other purchases since. Others again are locally made copies of great works given on loan to us at one time or other.” He pulled over a chair and bade Catherine sit down, drawing over another for himself and positioning it close to hers. He waited for her to speak. 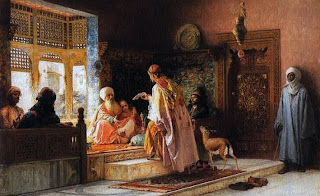 “Celebi Seilim. You know I have embraced the teachings of the Qur’an and that in my heart am mu’slim. It’s just . . .” she hesitated unsure as to how to continue. Seilim’s face did not register any obvious reaction and he remained silent. “It’s just . . . before I knew Djivo was alive, the Path of the true believer was my only salvation. But now with my love returned safely I know I will travel with him to his home in Ragusa or to the ends of the earth. In doing so I will surely be unable to proclaim my faith publicly. This is for his sake rather than mine.” Catherine paused for a moment and looked at him with pleading eyes. “Does this make me a kafir ? Does publicly denying the brilliance of Islam and hiding it’s beacon for the sake of temporal emotion negate the love I feel for it’s teachings? ”
Seilim took her hand and lifting it touched her lips and then his with her outstretched fingers. He spoke softly,
“Detach thyself, be hanifi
And from all faith’s fetters free,
So come, like the monk, step up
Into religion’s abbey.”
Catherine waited for an explanation and as the gentle old man continued, a shaft of sunlight bathed them both in dusty gold, “Those lines of great wisdom are from Mahmud Shabistari’s poem the Garden of Mystery. He was a great student of both Rumi and Ibn ’Arabi and it espouses the true Sufi’s enlightened approach to religion.” Seilim stopped for a moment. He was somewhat pensive. “The only truthful Path, Catherine, is the one that takes you to God. Formal religious structures which obscure the Light are irrelevant. Throughout the Christian lands many people, such as the Alumbrados in Spain, are throwing away the shackles of directed and constricting dogma and returning to their roots of gnosis and private spiritual experience. We are no different. The ulema of Islam hate our mystical explorations and do no less than the Roman Inquisition to stamp it out.” He looked at Catherine directly, squeezing her hand to give reassurance. “Have no fear my child. You are bathed in the Light of the Divine Being and the clothes you wear are transparent.” 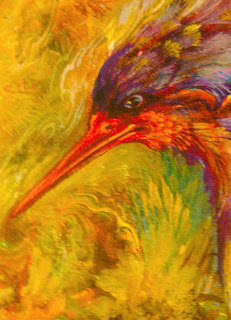 Catherine reddened and fingered the edge of the opened manuscript page nervously. After watching her for a moment Seilim leant forward. “Do you see that large bird? ” He pointed to the central figure of the illustration, a large peacock type bird with flaming tail feathers and a golden crown. Catherine nodded. “That is the Simurgh, the ancient supernatural bird and helper of humanity. The Simurgh is the bird of the dawn, the bird of the Opening. Its flight represents the ascent of the human spirit to heaven to find both God and its true self. You Catherine! My child. Are the Simurgh.” Seilim paused again before pointing to the representation of a small brown bird sitting with its beak wide open in a rose bush. “That is the Nightingale. The possessor of a thousand songs, the harbinger of the dawn. He, represents human love. That bird is Djivo, your lover. By its very nature the nightingale’s passion wanes at the dawn of your day. However. . . there are times, like now, when the flights of your destinies will converge bringing you to nest together in the embrace of the celestial tuba tree.”
Catherine’s eyes had begun to water. The ecstasy of revelation and the joy of its relief coursed down her cheeks. She moved her head to prevent the falling tears soiling the manuscript and her eyes, suddenly, focused on the shoulder bag that lay on the floor between them. She reached down and retrieved the container holding the coiled Scrolls. “What should I do with these Celebi Seilim? ”
He took them from her and rolled the container between his hands. “They would be secure here Catherine. You know that now. Later, when you are safe, you can write to me with instructions. In the meantime I will take the opportunity to copy them, if that is acceptable.”
Catherine nodded with visible relief. “Thank you Celebi Seilim Zeitin Oglu. You are a true friend. I am only sorry I could not have stayed with you longer.”
Before Seilim led her from the room he secreted the manuscripts in a small alcove hidden by a false panel in the wall. The bright sunlight blinded them as they closed the library door behind them. Seilim took Catherine’s arm. “Those that surrender themselves to God and do good works shall be rewarded by their Lord.”
©R.Derham 2001 &2009
Posted by Roger Derham at Thursday, June 11, 2009