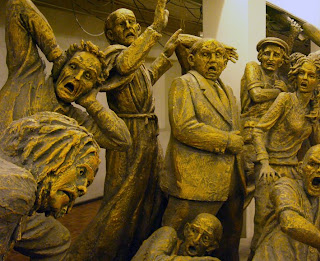 Ma Tars, in Persian, means ‘Don’t be Afraid’, and it is my sincerest wish for friends in Iran at this time.
It is perhaps all to easy for a ‘westerner’, far removed from the daily reality of life in Iran, to get excited, animated, worried, concerned about the ongoing oppression and yet be safely removed from the fear that that oppression invokes.
Where fear is deliberately perpetuated then it incapacitates totally, and invalidates any understanding of humanity, either for the victim or the perpetrator. And yet that is what the regime in Iran wishes to achieve – a denial of humanity, suffused with the selective abuse of an interpretative understanding of the will of Allah, and the guidance of the hidden 12th Imam.
Ayatollah Ali Khamenei’s regime, its ideals and raison d’etre, survives only because its purpose is validated by a clerical jurisprudence, which is in the hands of hand-picked jurists on the so-called Council of Guardians. Guardians of what, one is tempted to ask. A system of thought, or a system of humanity? As Catherine Z. Elgin has succinctly put it, in her book Between the Absolute and the Arbitrary, when building ‘systems of thought’ then there is often a deliberate suspension of judgements that are in dispute. It is obvious that the humanity of the Iranian majority is subsumed to the wishes of an elite minority, who are willing to suspend, to suppress, any judgements that are in dispute.
This is treachery!
Where the combination of perfidious and selective religious jurisprudence (fikh) is used to subjugate the will of a people, particularly when allied to a completely cynical and base political warning to a legal, military and religious elite of the potential loss of all of their powers and privileges if that popular will is manifest, then there is not only a denial of a core principle of Islam (Quran 8:58) but also of any aspiration of achieving a true Islamic Republic. 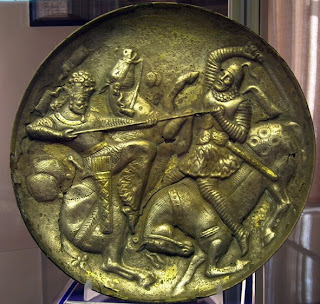 Sassasin Plate
In a tradition dating back to Umar ibn al-Khattab, the Second Caliph (not a man who endeared himself, it must be said, to Shi’a who implicate him in the death of Fatima and who in turn was assassinated by a Persian slave) learnt of a Muslim soldier at the Battle of Nahavand in 642, who killed a Persian soldier after luring him into surrender by the implied promise of safe conduct or quarter on the battlefield by saying ‘ma tars’. When this incident was reported to Umar he issued an order declaring that any soldier saying ‘ma tars’ to an enemy who then intentionally fails to fulfil the safe conduct pledge would they themselves then be executed: “By Him in whose hand my self is, if I learn of the whereabouts of anyone doing this, I will put him to death.”
Umar was of a family who were noted for their ability to settle disputes between other Arab tribes. But any one individual’s reasoning – even a rightly-guided caliph – was open to interpretation. One of the earliest Islamic jurists was Malik ibn Anas al-Ashbahi and in an analysis based on the Quran, hadith and the early ijtihad (independent reasoning) felt that the prohibition on Muslims breaking their pledge of safe conduct was agreed upon but that the execution of Muslim soldiers prosecuted for doing so was not an accepted practice.
Islam, as a system of belief, thought and action – and indeed the same problems are encountered equally in Judaic and Christian systems – has seen from the very beginning its core principles, its truth, interpreted by different and differing factions who then wish to impose that interpretation on the masses. Fundamentalism develops and Islamic fundamentalism, as seen in the ideological activities of such groups as the Kharidjites or Nizari in the past, or al-Qaida or Hizb ut-Tahir in the present, decry western-style ‘systems’ – democratic, capitalistic, socialist whatever – as being in complete denial of the will of God.
However, any fundamentalist positional interpretation creates an immediate counter-force. Fundamentalist interpretative essence is orgiastic but never fully satisfied and the very human desire to be a material and spiritual beneficiary of that interpretation has often meant ignoring competing or more valid beliefs until it is too late.
The Iranian regime now has an opportunity, given the signals sent out by the recent demonstrations, to re-invent its commitment to all the people of Iran, to rightly claim that the ‘revolution’ is not just an elitist aspiration but one which embraces the entire constituency. Otherwise it will surely implode. Any fundamentalist regime relying entirely on its own validation of an interpretation of the will of Allah, but entirely benefiting only a ‘chosen few’, is by its very nature already spent.
Further Reading:
Muhammad Munir, Suicide Attacks and Islamic Law. 2008 International Review of the Red Cross, Vol 90, No.869. P.71-89
Yasin Dutton, The Origins of Islamic Law. 1999 (Curzon Press, Richmond, UK)
Catherine Z. Elgin, Between the Absolute and the Arbitrary, 1997 (Cornell UP, Ithaca, USA)
Posted by Roger Derham at Wednesday, July 29, 2009 No comments:

This one is about Galway, Ireland.

I went to the gala opening, on Friday July 17th, of the revamped Druid Theatre here in Galway. I say revamped deliberately, as the building has a very confined footprint, and the architects have managed to sex it up with a very sleek and modern foyer below, a rehearsal room above while at the same time maintaining an incredibly intimate and effective theatre space. The play that was chosen to relaunch the Druid was the Gigli Concert by Tom Murphy, one of Ireland’s best living playwrights. The stage management, the acting, the tempo and the lighting were ultra professional and slick. The play? I am not entirely certain.
The central character is an English new-age ‘ologist’ fallen into an age-old trap of alcoholism. His fuelled, deranged and displaced psychosis creates two characters – a melancholic and manic-depressive real estate developer, and a child-yearning nymphomaniac with an imaginary god-child – whose actions and interactions are sub-consciously theraputic, and yet in an unusual twist of his psychosis he has these characters transfer their own longings back to him. Hence his desire to sing like Gigli, to break his five years of celibacy. The play is a highly intellectual, and Murphy has created an almost clinically detached and impressive exposition of some of the pathological pathways of alcoholic dementia. Not everyone’s ‘cup-of-tea’ it must be said. Perhaps it is me, but none of the characters, real or imaginary, evoked any empathy on my part. I really did not care what happened to them, but wished for a pharmacological hammer blow to stop the rot. As it happened – thank you Dr Murphy – the central character in an attempt at suicide managed to take enough sedatives to jerk him back into a temporary reality and he leaves, suitcase and bottle in hand.
I was glad of the wine waiting for me at the end. 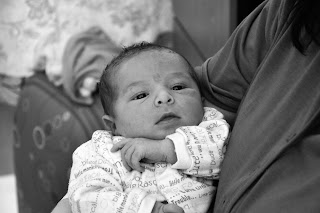 Jenny, my son’s partner, gave birth yesterday (July 11, 2009) to a fine baby boy, our first grandchild. What a strange yet wonderful moment this is in their lives, and in ours.
Watching while Jenny instinctively handled the baby I pondered on the connections, the timeline beyond the DNA. For the baby through my son, then me, then my own father, there is a link to the past, and a shared history and memory that stretches back for five generations, to my father’s recollections of his own grandparents. Through the baby I have a distinct, if tenuous, connection to the future, a future I will not necessarily experience but which I will remain a small part of. I am remembered therefore I was, to paraphrase Berkeley. 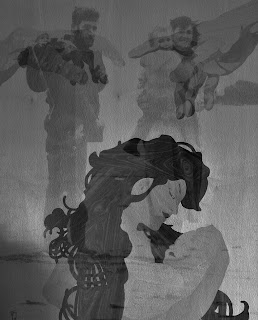 Our imprint on this world is but a footstep on the ebb shoreline of time: for a brief moment distinct, strong, determined, until the tide comes in. Bon chance young Leon Alex. I hope to share some of that journey with you, to teach you, to learn from you, to hand you back with regret.
That is the Grandfather Clause in this contract.
Posted by Roger Derham at Sunday, July 12, 2009 1 comment: