Lapidation– A loss of Reason 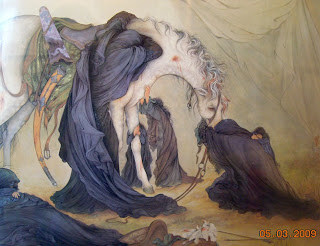 Mahmoud Farshchian's "Ashura"
Sa'd Abad Museum Complex, Tehran.
On the 5th March 2009, at the Sa’d Abad Museum complex in Tehran, I spent the afternoon taking in the sublime beauty of the metaphysical paintings of Mahmoud Farshchian of which his interpretation of Ashura, the Shi’a day of mourning that commemorates the martyrdom of Husain ibn Ali at the Battle of Kerbala in 680 CE (61 AH), is depicted above.
On the 5th March 2009, 350 kilometres to the north, in the city of Rasht, 30 year-old Vali Azad was dragged, in secret, to a pit in Lakan Prison, buried up to his waist and executed by stoning – lapidation – for the crime of zina – adultery whilst married. It is not certain who carried out the sentence but the post-revolutionary Iranian constitution dictates that the stones be not big enough to cause immediate death or small enough to cause little injury. There is no doubt that Vali Azad would have looked up to see the first stone being thrown. It is not known whether this was done by Hojjatoleslam Kashani, the sentencing Judge of Branch 11 of the General Court of Gilan Province, or perhaps a prison guard.
In either event it can only be hoped that the first stone rendered Azad unconscious but this is unlikely given the deliberate determination of the size of stones used. His bowels would have evacuated. The searing pain, perhaps the fracture of an eye orbit, nose or jaw followed again and again by repeated blows. Death when it came would have been a brutal implosion of the bones of the skull being forced into the soft brain tissue to create haemorrhage around the vital centres.
Zina is considered a hadd punishment, defined by the law. It must be supposed that given shari’a law’s requirement for four witnesses to the adulterous episode, and the unlikelihood of this in an adulterous sexual encounter, that Vali Azad must have confessed to the crime. Who knows whether this was done freely or as the result of coercive torture?
In 2002 the head of the Iranian judiciary imposed a moratorium on stoning, but individual judges have continued to utilise the punishment. 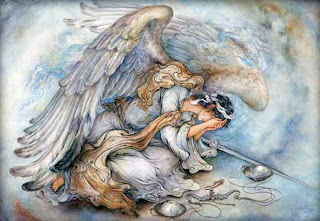 Mahmoud Farshchian's "Injustice"
Capital punishment of any kind, anywhere in the world, is the end of reason, particularly of those perpetrating the sanction. Stoning in particular as a legally recognised method of execution is as barbaric a form of human ‘justice’ as one could possibly imagine.
Amnesty International (Public AI Index: MDE 13/041/2009) have asked concerned people everywhere to protest in the strongest possible terms to the authorities in Iran to prevent further stoning executions, particularly in the case of Mohammed Ali Navid Khamami, sentenced recently to such a death, again in Rasht.
Posted by Roger Derham at Monday, May 11, 2009