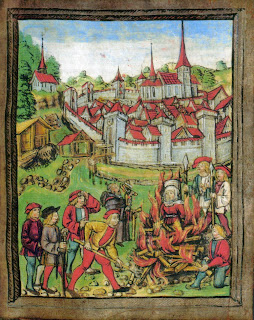 Rihla (The Journey) – was the short title of a 14th Century (1355) book written in Fez by the Islamic legal scholar ibn Jazayy al-Kalbi of Granada who recorded and then transcribed the dictated travelogue of the Tangerian Ibn Battuta. The book’s full title was A Gift to Those who Contemplate the Wonders of Cities and the Marvels of Travelling and somehow the title of ibn Jazayy's book captures the ethos of many of the city journeys I have undertaken on foot in past years.
This rihla is about an area near the University in Cork formally known as Gallows Green.
In 1976 in my second year in UCC I was dating a girl – or as they say in Cork ‘doing a line with’ – who was studying commerce. She lived in a house on Deerpark Road about 20 minutes walk from the University, a road that linked Pouladuff Road and Friars Walk. Late on some of those winter nights – university romances were invariably of short duration, with an incredible mutual intensity that only winter can generate for come the late spring exams and the long summer recess ahead people, promises and romances departed for distant lands – I would make my way back towards the University through Greenmount Crescent and St Finbarr's Road to College Road and with the wind howling on occasions I sometimes thought it sounded like a woman screaming. 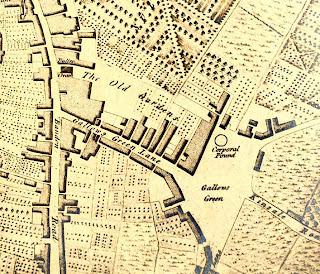 Cork 1759
And for good reason. The area was not always called Greenmount. Indeed up to 1852 Deerpark Road was known as the Kinsale Road and it terminated at Gallows’ Green where all public executions were undertaken until 1868. Greenmount Crescent was then called Gallows Green Lane and when the Cork Corporation leased the lands to Presentation Brothers to build a school there the street and location names were changed to try an eradicate the distasteful memory of the site’s original function. My return to my parked bike followed the route of many of the ‘drawn’ last journeys of men and women to their executions.

Modern Cork
One form of execution that took place in Gallows' Green in particular stands out. That was the hanging and burning of women for ‘petite’ or petty treason. 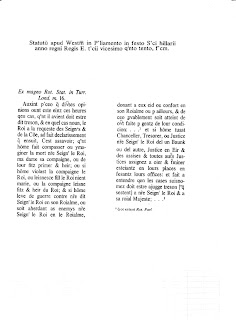 Title Page in Norman-French of 1351 Treason act
In 1351 the Treason Act was promulgated (25 Edw. III St. 5 c. 2) in the English Parliament to codify the common-law offences that comprised Treason. It was basically an act that declared the offences and punishments for where an inferior was disloyal to a superior in status and law. In the case of disloyalty to the Sovereign or his/her heirs (attempted murder/ counterfeiting / murder of justices) this was known as High Treason and the punishment for men convicted was to be drawn to the place of execution, hung but not killed, and then disemboweled and quartered while still alive. For women convicted of high treason the punishment was to drawn and then burnt at the stake as they felt it was not proper to have the woman displayed in a naked state to be disemboweled publicly.
‘Petite’ or the little or Petty Treason was a form of ‘aggravated murder’ where a subservient person or chattel, such as a wife or servant, killed their lord and master, or in the specific case of a wife killing her husband. For men convicted of this lesser offence the punishment was drawing and hanging (no quartering) but for women they were still burnt at the stake. In later years the practice of executing the women first by hanging before lighting the pyre generally occurred. However on occasions it was noted that the women were still alive when the burning took place.
This is a description of the execution of Phoebe Harris in 1786 in Newgate for counterfeiting: 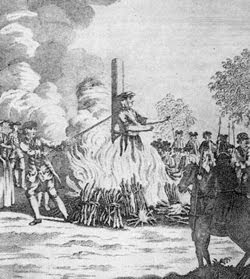 “Phoebe Harris was to be the first woman burnt at Newgate, as distinct from Tyburn or Smithfield, and her execution was carried out just after 8.00 a.m. on the morning of Wednesday the 21st of June 1786. A huge crowd, estimated at some 20,000 people, had turned out to watch this gruesome spectacle. Phoebe was led from the Debtor's Door of Newgate by two sheriff’s officers to a stake that had been erected halfway between the gallows and Newgate Street. The stake was some 11 feet high and had a metal bracket at the top from which a noose dangled. Phoebe was described as, "a well made little woman of something more than thirty years of age, with a pale complexion and not disagreeable features." She was reported to be terrified and trembling as she was led out. She mounted a stool and the noose was placed around her neck and was allowed a few moments to pray with the Ordinary before her support was removed and she was left suspended. According to V. A. C. Gatrell’s book “The Hanging Tree” she died hard, he reported that she choked noisily to death over several minutes. After hanging for half an hour, the executioner put an iron chain around her upper body and fastened it to the stake with nails. Two cart loads of faggots were now piled around the stake and then lit. It is reasonable to assume that she would have been quite dead by this time. After a while, the fire burnt through the rope and Phoebe’s body dropped, remaining attached to the stake by the chain. It took over two hours to be completely consumed by the fire, which continued to burn until midday.” 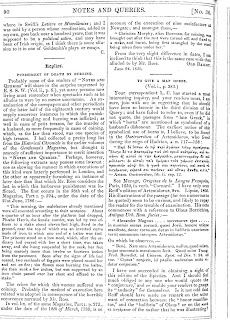 In Ireland the English 1351 Treason Act became applicable after Poyning’s Law (10 Hen.7 c.22) made the Parliament of Ireland subservient to the English Parliament and the Tudor Crown in 1494 during the reign of Henry VII.
On Wednesday, the 7th of May, Mary Earberry, after being first half hanged, was burned at Gallows Green, in Cork, for poisoning her husband, Daniel Earberry, a tallow chandler in Paul Street.
It has been difficult to discover how many were executed in this way but in England between 1735 and 1739 there were 32 burnings. The type of execution was to continue up to 1790 in England and to 1796 in Ireland when the Treason by Women Act (Ireland) 1796 abolished burning and hanging alone was substituted. This is a list of the women hanged publicly at Gallows' Green in Cork: 29.01.1800 Mary Connors, 02.04.1813 Catherine Donovan, 04.08.1815 Honora Houraghan, 10.04.1818 Mary Connell, 19.08 and 1833 Elizabeth Heaffy. In Dublin the burning/hanging took place on what is now Fitzwilliam Street and in Limerick it was in Cromwell's Fort. On the 29/04/1853 Honora Stackpoole in Ennis, Co. Clare was the last woman to be publicly hanged in Ireland. After the 29 May 1868 all executions were subsequently conducted in private and the public drawing to the place of execution was abolished in 1870.
20 years ago a mass grave of dismembered bodies was found at the back of a house in Greenmount (Gallows Green).
This is the very dry report of that find from www.excavations.ie :
“Cork 1990:022 Greenmount, South Ward, Cork . Mass Grave W699708 .
In July 1990 human remains were uncovered in the back garden of a private residence in Greenmount, Cork City. The original ground level of the garden was almost 2m higher than the ground level of the house. It was while reducing the level of the garden that bones were discovered.   The exposed earth was over 1.5m high at its highest point. It consisted of a dark coloured band of refuse material - glass, pottery, tin cans and metal and varied in depth from 0.11m to 0.48m. Beneath this was a brown silt layer, which extended to present ground level. Within this silt layer at a depth of 0.85m from the surface was a compact layer some 0.1m deep, which may have been a pathway which traversed the site. At a depth of 0.18m to 0.2m below this was a 20mm-40mm band of red brick and mortar fragments. A band of broken slates lay 0.16m-0.18m further down. The human remains were 0.1 7m-0.2m under the broken slates, at depths ranging from 1.1m-1.4m below the surface.   At least 15 individuals were recovered from the area. None of the skeletons was complete and many of the bones were broken. In one area all the long bones were stacked neatly together with the skulls lying close by. No evidence of a delimiting pit was uncovered - it is likely the grave covers a substantial area and the pit walls lie beneath neighbouring gardens. There were no associated finds.” 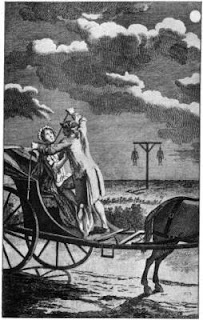 No wonder I thought I heard the screams on those winter nights.
Further Reading: Shelly A.M.Gavigan, Petit Treason in 18th Century England: Women’s Inequality before the Law.
Posted by Roger Derham at Friday, May 14, 2010