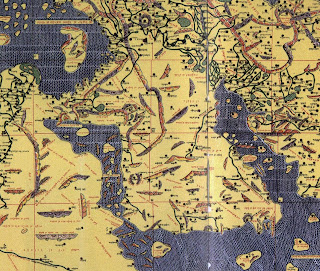 Al Idrisi World Map (Early 12th Cent, Sicily)
Detail of Arabian Pennisula
While travelling back from Australia recently with Etihad Airways I took the opportunity to stop off in Dubai for three days. The United Arab Emirates, and the Emirate of Dubai specifically, were not places I had been to before in my middle-eastern travels and I was genuinely quite curious to experience this modern version of an El Dorado (or perhaps Al Dorado to be culturally sensitive!).
Given the recent property implosion in Dubai the sequence of finished and unfinished, occupied and unoccupied skyscrapers stretching from the Creek at Deira to New Dubai has an uneasy resemblance to a House of Cards that in time will topple in the wind and be swallowed up by the desert sands. But in the meantime what cards they are! Architects have been given the license to push the parameters of steel, concrete and glass to the very edge of their envelopes.

Interior of Burj al Arab
Two memories stand out in particular. The Burj Khalifa tower is quite fantastic. The first night I was there the world’s tallest building stretched towards the three-quarter moon above like a celestial bridge. So alien and yet so belonging! During sunlight hours on the other hand it is a gnomon to the Dubai day. I could not keep my eyes off it even when the synchronized fountain display in the plaza in front of the tower was spurting in all its splendour. 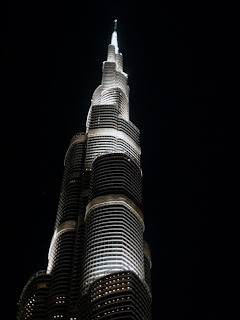 The Burj Khalifa
The second building that amazed was the iconic Burj al Arab. Staring up at the blue, green and golden balcony folds of the interior atrium from the lobby floor was mesmerizing. For me it bore an uncanny resemblance to the roof of the Sultan’s private chambers in the Yesil Cami or Green Mosque in Bursa in Turkey, its blueness, the gold, the stars.
Both are places where you just want to lie down flat on your back and look up at the stars. Like a desert night. Quite wonderful.
Anyway to Exonyms and air rage! While in the Burj al Arab I picked up an English version of the Gulf News newspaper and was immediately struck by an article describing Iran’s demand that any airline flying in Iranian airspace must refer to the body of water between Iran and Arabia as the Persian Gulf. Failure to do so would result in exclusion from their airspace. Reading on I was then appraised of the intensity of feeling over what this body of water is called, a row that continues to simmer. The Arab countries since about 1950 have referred to it as the Arabian Gulf, the BBC call it the Gulf but the Iranians insist on referring to the entire body of water in its historical cartographic attribution as the Persian Gulf.
Now I like old maps and always I have understood the Arabian Gulf to be the old name for the Red Sea (see a 1540 Honter map from my own collection below) and the body of water to the east of Arabia to be the Persion Gulf. 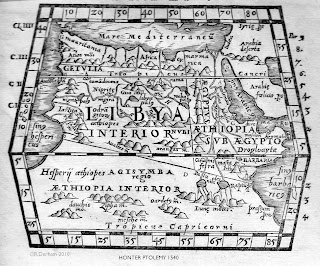 Ibn Khaldun (d1406 CE/808 AH) the Arab polymath (not that beloved it must be said by modern pan-Arab nationalists) called the Persian Gulf the Green Gulf in his famous work The Muqaddimah, the first book of his universal history.
The naming of any geographical territory, which is not directly under a country’s political control is known as Exonymy. I was not aware until following up on this article on getting home that the United Nations has an entire sub-organization entirely dedicated to the Standardization of Geographical names, which meets in conference every five years. Iran has been consistent in pushing the agenda that the entire body of water should continue to be known in the future as the Persian Gulf and they appear to have been successful in this as the most recent UN Secretary-General’s Report on the Oceans and Laws of the Sea maintains the Persian Gulf as a descriptive exonym. (page 32, UN Doc A/64/61/Add 1, 25 November 2009).
I know that there are concerns about global warming and the seas rising but extending the Persian Gulf to 40,000 feet seems a little bit excessive.
Air rage or umbrage? Who knows the mind of a shrimp or seagull?
Further Info:
http://unstats.un.org/unsd/geoinfo/uncsgnreports.htm