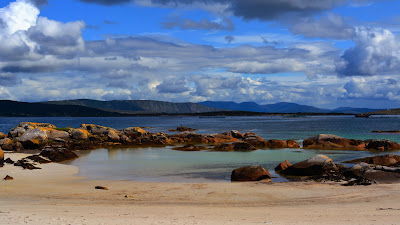 Looking north from the north end of Furnace Island.

This is the third Rihla ( see: Rihlas 47&49) about the quays and slipways of the Connemara Islands (Na hOileáin) this time exploring those of Lettermullan  and five other associated smaller islands. 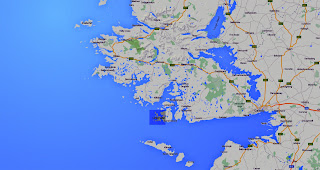 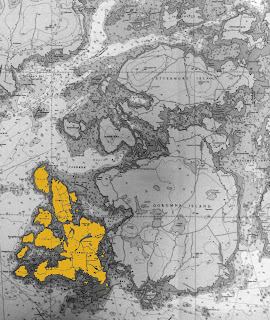 Na Dúbláil is not a term you will find in any geographic or cartographic description or depiction of the group of 9 small islands that form the most western part of what are called Na hOileáin or Connemara islands. It is my own derived attribution because of the fact that in the 19th century the then very isolated islands of Lettermullan, Furnace, Dinish and Inisherk were the centre of the illegal Connemara poitín industry. The dúbláil (from the Irish verb for duplication or repeat dúbluighim or dúbailt) is the second distillation or run of a poitín still, the whiskey that, once the first drops have been given to the fairies, is ready for consumption. 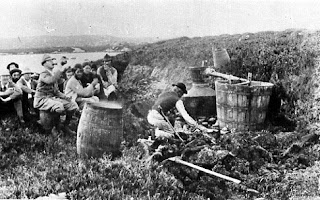 Poitín (from pota a small pot used in the process) distillation has probably existed since the 1400s and by 1556 a license was required from the Lord Deputy of Ireland. From 1661 excise duty and regulations drove small capacity 'local use' production underground and in 1731 all production in the 'mountainous' parts of the Kingdom was banned. By 1800 excise-paid legal or 'parliament' whiskey cost about 13 shillings per gallon dropping in price to about 7 shillings per gallon in 1831. The cost of illegal whiskey or poitín in 1831 was about 3 shillings per gallon and it was noted that an Irishman could get "dead drunk" for two pennies.  In 1997 the distillation of Poitín as a defined spirit became 'legal' in Ireland again and its official production is now regulated by EU Directives and Regulations (EC No.110/2008). 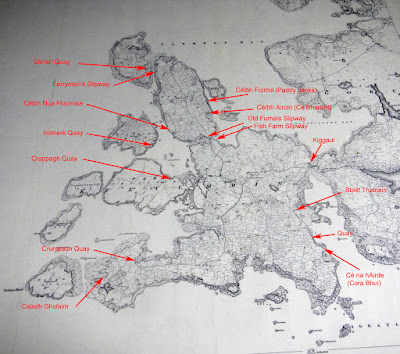 Quays and Slipways of Lettermullan and outer islands.

Lettermullan and the outer islands became part of the O'Flaherty lands in 1574 and 100 years later in 1675 were granted to Stephen Lynch of Galway. In 1684 the lands passed to Nicholas Lynch of Barna (who also owned the lands where my own house stands) who married the daughter of the wonderfully named Neptune Lynch of Lettermullan.

The largest of islands is a place which for some reason I expected to be deserted, forlorn and discarded and yet it is not. It is well populated and from the activity on the slipway of the fish farming concern on the northern edge to a training exercise for maritime rescue at Cé na hAirde on the south-east to a blocked road caused by County Council widening in the south-west the island appeared to be alive, breathing, existing.

In an interesting observation it is noteworthy that when the population of the rest of Connemara was decimated by emigration and famine in the 1850s Lettermullan's remained static or rose slightly. 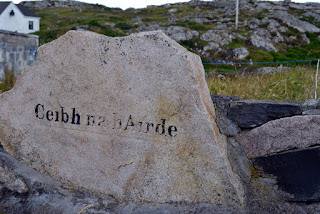 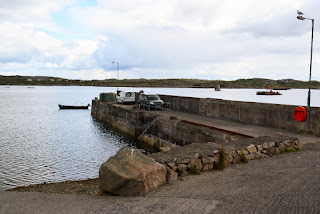 The marine rescue boat was just to the left of this picture but I got the sense they did not want photographs taken. 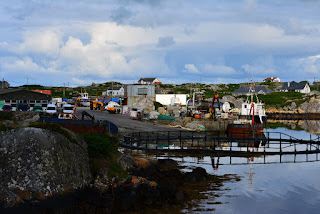 The fish farm cooperative at the point where Lettermullan joins Furnace island. 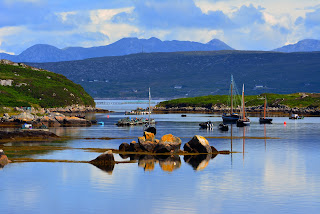 Looking north from Lettermullan towards the narrow channel between the small island of Oileán Chaisin (Island of the Small Twist or Bend) and Furnace Island. 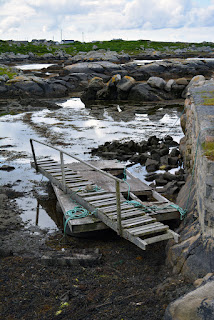 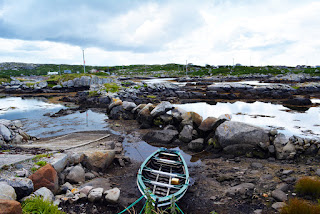 An unnamed old slipway and pier on southern edge of Furnace island. In the distance in centre you can see another new slipway to the west of the causeway linking Lettermullan and Furnace. 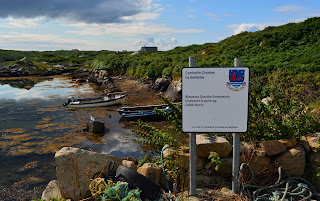 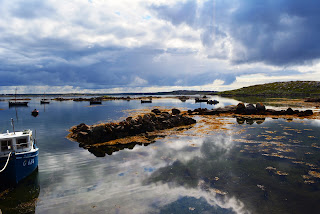 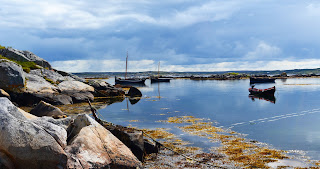 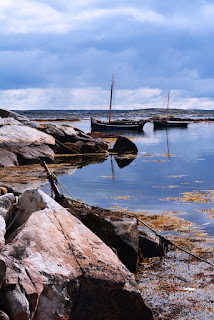 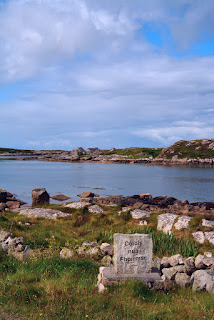 In the distance the quay on Inisherk. 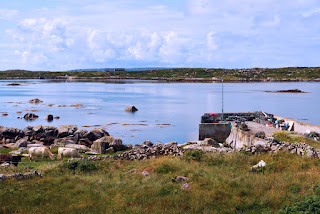 In the distance the quay on Crappagh. 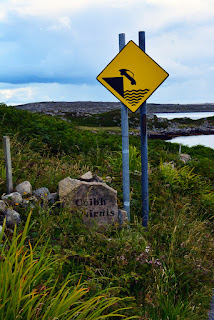 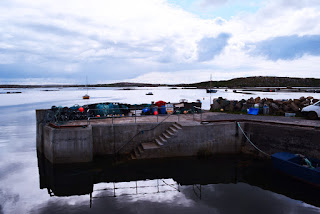 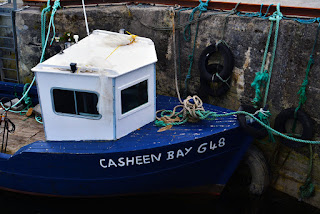 Casheen Bay is the bay north and north-east of Furnace island. 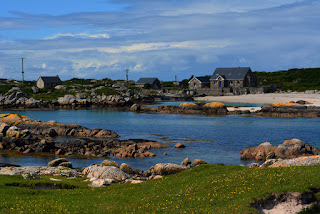 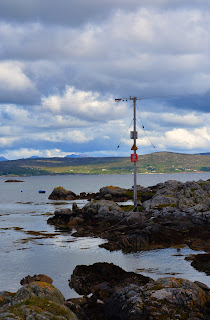 Connection to outside world from Furnace to Dinish. 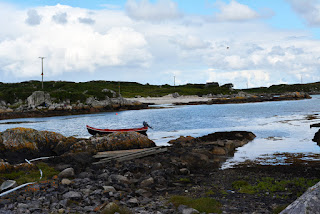 This is the point on the west side of Furnace island where a ferryman, whose job was to ferry the schoolmistress to the island to teach 12 children (Total Population in 1905 was 54 persons) on the island of Dinish. 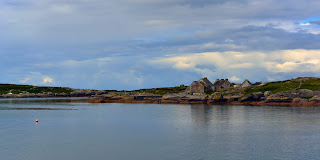 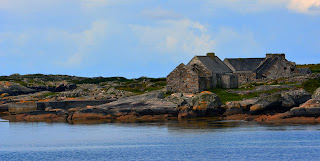 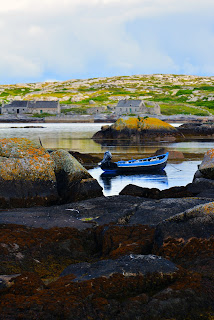 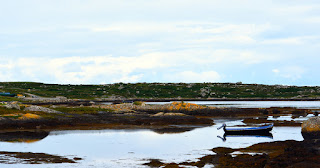 In the 1850s Henry Comerford a Clare landowner who had established himself as a merchant in Galway bought up the titles to Lettemullan and the outer islands from the Lynches for about £10,300. An Cnapach was sub-let to the McDonagh family. Sometime later a member of the family allegedly found some gold in a shipwreck and bought the island outright. The McDonagh family that established in Crappagh had 23 children, many of the girls who then intermarried with the O'Tooles and O'Connons in Lettermore and like one sister Sabina McDonagh who opened the Hotel of the Isles, all of whom were very industrious. One branch established under Redmond McDonagh a store on the island while another moved into Galway where they subsequently took over most of the Comerford merchant concerns and are still in business today as Thomas McDonagh & Sons, Builders Providers. The island, as can be seen from the above photograph, is still a private enclave having been sold onto another local a number of years ago.

It was perhaps this type of industrial and entrepreneurial spirit that made Lettermullan and Crappagh in particular somewhat unique in resisting the impact of the Great Famine and maintaining a steady population. 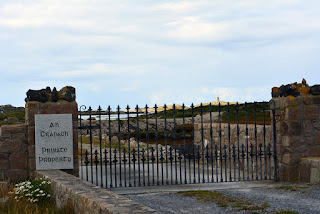 Golam is the most south-westerly of the islands and it would be nice to think that its name derives from Míl Espánia, whose given name was Golam, the legendary founder of the Celtic Milesian tribe who invaded Ireland and defeated the Tuatha dé Danaan. More likely its name may derive from the Irish Goilim meaning to lament or even from Goillín, a tormentor (the Devil or perhaps the Golem from medieval Kabalistic lore based on the Psalms(139:16) depiction of "an unfinished human being") because of the impact in the distant past of the loss of fishermen to drowning upon its rocky shores.

Both of these attributions also hold up when you analyse the number of local shipwrecks but most particularly the events of February 1873 when the Julia, a ship carrying timber from Liverpool was washed up on Golam and from all around the islands and the mainland northwards people came to salvage the cargo. There was a standoff between the Coastguards and a boatload of men from the islands off Carna and shots rang out. Two men, Patrick Folan and Thomas King were killed. Subsequently on the basis of testimony of a John Larkin from Dinish Island two of the coastguards were indicted for manslaughter but subsequently a Grand Jury trying the case in Galway dismissed the charges on the second day in the trial due to lack of credibility in the witness accounts. 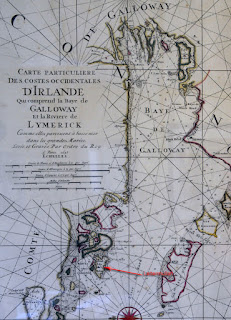 Detail from a Mortier 1693 map of Galway Bay.
(Mason Island is the last island in the bottom left.)

The body of Folan was brought back to his parent's house on Mason Island off Carna, which is close to St Sinach Mac Dara's island, the sacred site of the patron saint of Connemara fishermen and to where I am off to next.