This one is about West Cork, Ireland. 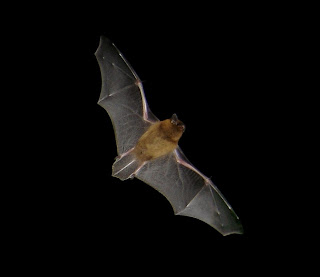 What wonderful worlds words can transport you to! By their very nature they are of the moment, the present, yet each in their own way are a timeless lexicon of magic, of mystery, of descriptive pre-history when heroes and gods battled for our consciousness. 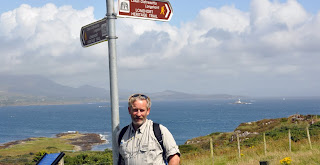 I was walking last week on Bere Island off the south west coast of Ireland. It was one of those panoramic days when the sky, land and sea were in symphony and each footpath taken became a journey into the language of the landscape. The island has an interesting pedigree in that it is the site of a Viking ‘naust’ or boathouse in Lonehort Bay but also has extensive English military fortifications and gun emplacements designed to protect the First World War Atlantic Fleet of Royal and US naval vessels that were anchored in its lee. I stopped at one point at the southern edge of the Derrycreeveen battery to read a blue metal plaque erected by the tourism authorities.
Like Ali Baba’s ‘Open Simsin’ or ‘Sesame’ the plaque was a doorway to a treasury unknown to me. It described the deserted fort as being the location of one of Ireland’s biggest colonies of Soprano Pipistrelle, the smallest Irish bat. It is called a Soprano Pipistrelle because it echolocates at 55 kHz whereas its’ Common Pipistrelle cousin (which it was confused with until 1999 when the echolocation frequency distinctions were made) echolocates at 45 kHz.
As I walked on the word 'pipistrelle' continued to evoke an enormous sense of wonderment as I had managed to get this far in my life without ever hearing it used. What was its origin?
Pipistrello is the Italian for bat. It derives from the Latin for bat, vespertilio, a creature of the evening dusk, vesper. Further exploration shows that vesper is the Latin derivative of hesperos, the Greek for the evening star Venus.
And this is where Hercules comes in. 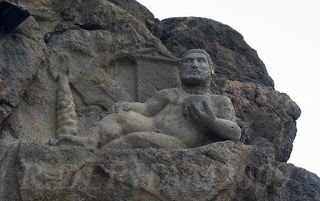 A Statue of Hercules overlooking the Bisotun Mountain
Kermanshah, Iran
The Hesperides were the Nymphs of the Evening who inhabited a paradisiacal garden – personified by the clouds – at the western end of the world. Here were kept the golden apples from the tree of immortality that Hercules was ordered to retrieve as one of his extra two labours (a.k.a. anger management course) by Eurystheus.

The Hesperides
Hare Island Sound, West Cork, Ireland.
The following evening after discovering the pipistrelle on Bere Island I travelled a short distance by ferry to dine on Hare Island at the Cottage Inn. It was evening time and the sun was setting on another wonderful day. Venus was rising and somewhere in the shadows of the twilight I knew that the Soprano Pipistrelle was emerging to chase insects across the waters. Magic, mystery, ancient lore fuelled my imagination.
And to the west the golden clouds of the Hesperides drifted by.
Posted by Roger Derham at Saturday, August 15, 2009