This one is about Ani, capital of old Armenian Kingdom, Eastern Turkey. 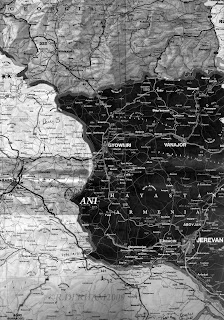 On the 12 October 2009, in Zurich, Turkey and Armenia signed a series of protocols aimed at normalising relations between the two nations. Two of the most important facets of this agreement was firstly an undertaking to open the common border to travellers and commercial traffic within two months after the entry into force of the protocols and secondly the establishment of a joint commission to conduct an impartial scientific examination of the historical records and archives relating to contentious issues. Although not spelt out specifically this commission is expected to primarily examine the ‘Armenian Genocide’. 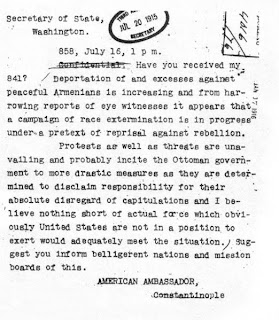 The incarceration, extermination and deportation (the systematic nature of which has been recognized as genocide by about twenty countries and the European Parliament) of somewhere between 500,000 and 750,000 people of Armenian ethnicity between 1915 and 1918 is a highly emotive issue for citizens of both countries and something that I first encountered when visiting Armenia in 2002. Whether walking up the main street in Yerevan towards the very stark and somber genocide monument or waking up each morning and staring south-west towards Mount Ararat knowing that you could not reach the mountain from within Armenia or talking to people for whom the genocide was a fact of life and that the lack of acknowledgement or apology by Turkey, for this stain on its modern history, rankled most.
There was also, from my perspective, a medical connection as the Committee of Union and Progress (CUP), the political party that came to power in Turkey in 1908, had been founded by four medical students in 1889 and which later as it took control, mainly through the actions of the Teskilat-I Mahsusa under the direction of another physician Behaddin Shakir, bore ultimate responsibility for many of the atrocities committed.
In an uncomfortable way since then the moral, economic, legal and geographic vacuum the genocide created has continually informed my travels in the area. For example while visiting the Vank Cathedral Museum in the New Jolfa district of Isfahan in Iran in March of this year the imagery and memorabilia from the genocide period displayed in the museum were numbing in their impact. Even more so when I remembered back to earlier travels in south-eastern Turkey in October 2007. 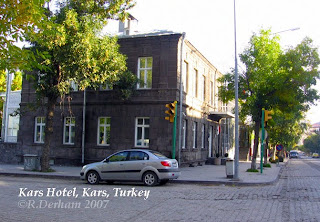 I was based in Kars, in a beautifully restored hotel that had once been a Russian mansion (at the time of the genocide Kars and this part of Turkey was in Russian hands and indeed one of the main reasons for Turkish establishment of concentration camps to detain Armenians was their supposed collusion with the Russians), and walking in the city I came across a closed museum dedicated to the genocide. A day or so later while driving near Igdir I noticed another sign in English for a genocide museum and thought this most enlightened. It was only later that I found out that both museums were in fact dedicated to the ‘genocide’ of Turks by Armenians!
That trip in particular brought home to me, in addition to this very obvious moral vacuum, the enormous geographic and legal vacuum the genocide has perpetuated. Returning northwards from driving half-way up Agri Dagi (Mt Ararat) to the fort of Koran Kilesi, with its guns pointed at Armenia, I encountered convoy after convoy of Turkish military hardware and manpower rushing the opposite direction into this south-eastern corner of Turkey. Why? Eradicating and deporting the Armenians from their lands, farms and homesteads had allowed Kurdish clans to move in and occupy the deserted spaces. 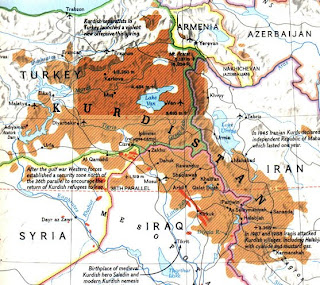 And now the ‘modern’ State of Turkey, which has been absolved in the main of responsibility for their Ottoman predecessors’ genocide of the Armenians, has a ‘Kurdish’ separatist problem. The sins of the grandfathers have come back to haunt and in an equally moral and secret vacuum the ‘modern’ Turkish State has over the past 20 years tried to militarily and governmentally eradicate the 'Kurdish problem'. 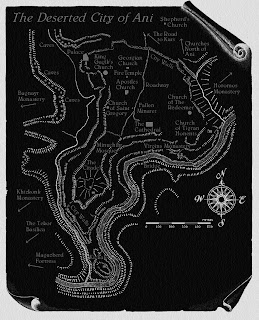 And so to Ani. And to vacuums.
Ani is about 50km from Kars, right on the Armenian border. Ani was a frontier fortress as early as the 4th century. It became capital of the Armenian Kingdom under King Ashot III in 961 and the residence of the Armenian Cathilicos in 992. At one point 100-200, 000 people were thought to have inhabited the city. It came into Byzantine overlordship in 1045, fell to the Seljuks in 1064, to the Georgians in 1199, and was nearly completely destroyed by an earthquake in 1319 at which time it began its terminal decline. The Catholicosate left in 1441 for Yerevan and the place was fully abandoned by the mid-1700’s. 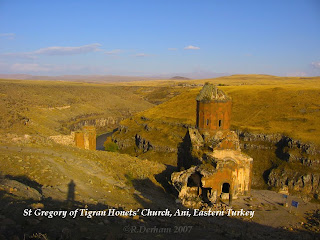 The day I was there it was equally deserted but between the ruins of impressive fortifications, numerous churches, a Seljuq mosque, a Zorastrian fire temple and two deep gorges framing the plateau it was probably one of the most impressive archeological and historical sites I have ever visited. And yet the desertion, the empty spaces and fallen walls, lent themselves only to silence. I got no sense of previous reverberations or existence. No laughter, no chaste incantations, no call to arms. Just a vacuum! All memories extinguished by the repeated violence of men.
Perhaps this part of the world has always been a vacuum, and nothing can ever fill it. Certainly not love, fellowship, or co-existence.

Further Reading:
Protocol on the Establishment of Diplomatic Relations between the Republic of Armenia and the Republic of Turkey, www.armenianow.com/pdf/20090831_protocol.pdf.
http://groong.usc.edu/ICTJ-analysis.pdf
http://www.smh.com.au/news/world/long-history-of-the-doctors-of-doom/2007/07/06/1183351455116.html
Posted by Roger Derham at Thursday, October 15, 2009