This rihla is about Salzburg, Austria. 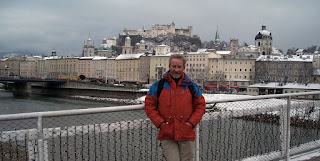 Salzburg in the Snow,
Jan 2, 2010
Another blog. Catch up time.
I am a pipe smoker and probably the only non-secretive smoker amongst my medical peer group. When I qualified about 15-20% of medical graduates still smoked but that proportion has decreased with information and occupational exposure to the effects of smoking to about 1%. In continuing to smoke it is not that I lack insight but it is the direct result of an addictive personality and having no desire whatsoever to discontinue.
Anyway, marginalised as I am (and probably deserve to be) on social occasions to dark, wet and windy exterior ‘lazaretto’ outposts in the alleyways and sheebeens of this world I now take pleasure – real pleasure – in finding places – restaurants, bars, airports etc – which provide smoking facilities without an overbearing sense of compromise. 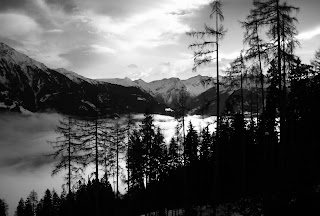 A River of Cloud in the Gastein Valley
above
Salzburg, Austria
Imagine my joy!
It is January 2, twenty ten (according to a BBC missive) I am in Salzburg Airport, down from the mountains in a snowstorm, the plane is running two hours late and I venture outside to smoke. Earlier in the day I had seen the house where Mozart was born between the throngs of shoppers on Getreidegasse, walked through the Mirabelle garden where Maria von Trapp had walked and where the fountain scene from the Sound of Music was filmed, and pondered on the Doppler effect (His seminal paper was beautifully entitled :On the coloured light of the binary stars and some other stars of the heavens) of Christian Doppler, a Salzburger, as I dodged the shoppers. I had also found quietness wandering through the 13th Century Hospital for the poor of Salzburg built into the cliff space, marvelled at the baroque splendour of the roof of the Cathedral and how it reminded me of some of the best of Ottoman roofs, wondered at the power of the city’s medieval Prince-Archbishops and the expulsion of Salzburg’s Jews and Protestants in different eras on winter days such as these and then, while looking at a weird skeleton installation in the crypt below the Cathedral – with its blank wall slabs ready for the headstones of future dead archbishops – getting really annoyed at knowing that a medieval law on blasphemy was being signed into law in Ireland at this very time. 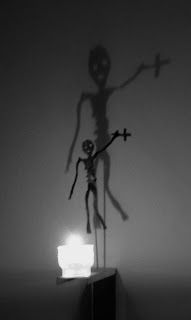 A Skeleton Installation in The Crypt beneath
Salzburg Cathedral!!
(Irish Blasphemy Law sprung to mind)
Back to my smoke. In front of the terminal building there are a series of light-blue ironwork benches with gleaming steel-blue ashtrays attached at either end. It is dark and the snow flurries are blowing in. I sit down.
And …. There are cushions provided!
It is no longer a lounger for the desperate. It has become a settee for the sated.
Have a great twenty ten, whatever that is.
Posted by Roger Derham at Sunday, January 03, 2010