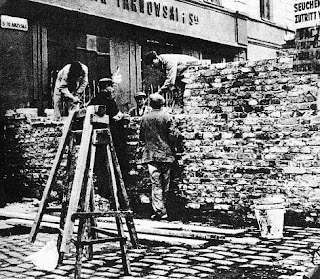 The Warsaw Ghetto Wall 1940
The boy was sitting on the ground drawing a heart-shape with his finger when a shadow appeared over him. He looked up and recognised the man.
‘Come Ahmed, there is someone I want you to meet.’ The tall man with large shoulders and dressed in white linen spoke softly as he held out his hand, his very large hand.
Ahmed took the man’s hand as he stood up and together they began walking towards the horizon.
After some time the horizon did not seem any closer. There were no trees, no mountains, no rivers. Sky and earth were as one, two sides of the sameness. He finally asked, ‘Where are we going Jabrail?’
‘I want you to meet someone.’
‘Who?’ Ahmed looked all around him. ‘There is nothing out here. Who would live here?’
‘Be patient child. Even in a desert there is abundance. The man likes it out here.”At that moment Ahmed could make out another figure walking towards them. Closer and closer he came. An old man with a squashed face, a large forehead and white hair that flowed back in waves over his ears and temples. He carried a waterskin and walked in short steps slightly stooped. He drew up near and offered the waterskin. ‘Take some water. It is good.’
Ahmed hesitated but with Jibrail’s encouragement accepted the skin and tipping it back took a draught of the cool sweet water. ‘Thank you,’ he said handing it back. There was a silence, absolute silence.
Jibrail broke it. ‘David. This is Ahmed Khatib. Ahmed. This is David Ben-Gurion. You have much to talk about.’
The old man and young boy looked at each other and then to where Jibrail had stood. He was gone.
‘Shall we sit?’ Ben-Gurion asked.
‘Sure,’ Ahmed replied. And they sat.
‘Do you know who I am?’ Ben-Gurion asked.
‘I think so.’ Ahmed replied. ‘My father mentioned your name often and said you were the cause of all the troubles for the Palestinian arabs and were directly responsible for the fact that our family had to live in Jenin.’
‘You are from Jenin?’
‘Yes. From near the camp. But originally we came from a village much further north. The village was shelled by the Israelis and we fled.’
‘Why or how are you here? Why not still in Jenin.’ Ben-Gurion asked.
‘The army shot me in the head and bottom. I came here.’
‘Why?’
‘Because I led a good life I suppose. I used bring my mother tea every morning and said my prayers.’
‘No I meant why did they shoot you?’
‘I was with my friends pointing toy guns at their jeeps when they were attacking the camp.’
There was silence again. This time the boy broke it. ‘Why do you hate us so much that you feel the need to kill us like I used to kill rats.’
‘I do not hate you.’
‘You do not admire us. You think we are mice and without intellect.’
‘That is true. When I fought so hard to establish the State of Israel I knew that the presence of so many Arabs in such a small and young state would forever cause problems. I spent considerable effort and time justifying any possible means of trying to get all Arabs to leave, to flee. That was my solution. I thought it moral.’
‘And now you have placed us in a ghetto. With the Wall? Just like with the Nazis in Warsaw.’
‘Different time, different solution to the same problem.’
‘Starvation, denial of medical services, free speech, right of assembly, restriction of travel, the murder of foreigners trying to help us both in the West Bank and in Gaza. Like in Warsaw creating a gradual constriction.’ Ahmed stopped and looked around at the vast nothingness around them. He continued without looking at Ben-Gurion. ‘You are a Pole. Surely you must understand the effect and consequence of trying to put people in a ghetto. Are you like the Nazis? Have you a ‘final solution’ in mind for us Arabs as well?’
‘That is not for me to say.’ Ben-Gurion stood up and turned to leave.
Ahmed stayed sitting. ‘You are dead so!’
Ben-Gurion smirked. ‘Of course I am dead, child. As you are.’
‘No I meant in your soul. My soul is not dead whereas your’s is.’
‘What do you mean?’ Ben-Gurion asked.
‘When the soldiers shot me and I was taken to Haifa, my family gave my organs to Jews, so that they might live, that they might see there is a better way.’
‘I do not believe you.’
‘My heart was transplanted into a 12-year-old Israeli Druze girl, my lungs into a Jewish teenager suffering from cystic fibrosis and my liver divided between a seven-month-old Jewish girl and a 58-year-old mother of two suffering from chronic hepatitis. One of my kidneys went to a three-year-old Jewish girl and the other to a five-year-old Bedouin Arab. My heart, my soul lives on.’
On the horizon, eight or nine more figures were coming towards them. Jibrail was with them.
‘Who are they? I don’t see so good.’ Ben-Gurion said.
Ahmed stood up to walk towards them. He stopped beside Ben-Gurion and looked at his eyes.
‘You have never seen, have you? They are people from the boat that the Israeli commandos murdered in open seas. They were trying to help us also. Good people. Good hearts, good souls. They will keep coming you know.’ 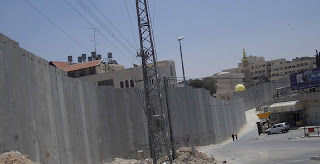