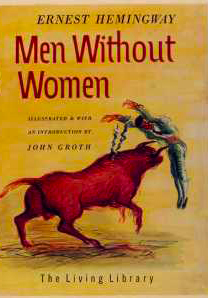 There is absolutely no connection – that at a conscious level I can think of – between this blog entry and my July 29 posting concerning the new UN Women organisation. The title refers to a collection of short stories by Ernest Hemingway, first published in 1927. I recently happened upon a 1946 edition of it in a new bookshop in Skibereen, Co. Cork called The Time Travellers Bookshop.
What a wonderful name and caught in its 'timewarp' I spent a good hour trawling its shelves.
I bought the book for my father –  at 85 he has been a widower for nearly ten years and whom I was due to see the following day – for two reasons.
Firstly with my father in mind the title intrigued me. After the death of my mother he had established a new social pattern of taking out to lunch, on a reasonably regular basis, the widows of his deceased friends. This became a very important aspect of his life and something fully savoured. Unfortunately in recent times most of those women friends have either died or become too infirm to participate and once again he is a man without women in his life.
Secondly in the years after the Second World War my father moved to live in Barcelona for six months (the poor man’s Switzerland) hoping the dry atmosphere would help speed his recovery from pulmonary tuberculosis. He is somewhat reluctant to talk about his time there and in the silence it often strikes me that thoroughly scared by the prospect of dying from the disease he had also gone there to hide away, to die. Thankfully the climate had its effect – but also I suspect his enormous personal religious faith – and he described his sense of returning home to Ireland as having returned ‘undefeated’.
‘Undefeated’ happens also to be the title of the first short story in the Men Without Women collection. The story was an expansion of Hemingway’s fascination with the art, terror and brutality of bullfighting first seen in his 1926 book, The Sun Also Rises and which was to achieve its full expression in his 1932 book, Death in the Afternoon.

The recent vote in the Catalan parliament – in the Barcelona of my father – to ban bullfighting has inflamed enormous divisions particularly in the Pamplona of Hemingway. I have walked those streets of Pamplona along the route of the daily bullrun but only ever once went to a bullfight. I found it fascinating, terrorising, sensuous and barbaric all at once. I agree wholeheartedly with its suppression but understand equally its hold for the aficionados.
In 'Undefeated' the once-marvellous but now aged matador Manuel discharges himself from hospital and accepts a piffling amount to fight a ‘nocturnal’. It is all he knows what to do and he must express himself. The chosen bull is good and the reader is drawn into the contest. You will him to withdraw but he does not and although Manuel eventually succeeds in killing the bull he is gored badly. The story leaves off at that point, as Manuel is being placed on the operating table, his fate uncertain. His only concern was that they would cut off his ‘coleta’ or matador’s pony-tail: a sign of final retirement. 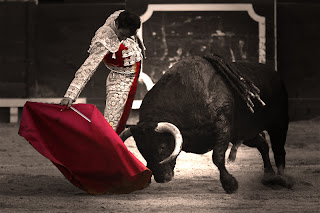 I gave my father the book and he remembered that he once had a copy, which he had lost many years ago. I looked at him, head down, leafing through it and in a strange way imagined his once jet black hair in a ‘coleta’. My father has survived pulmonary tuberculosis, diptheria, bladder cancer, cardiac by-pass surgery, and prostate cancer with his brain – and very personal faith – intact.
A man without women yes; but definitely undefeated.
To read Men without Women go to:
http://danworks.files.wordpress.com/2010/01/ernest-hemingway-men-without-women.pdf
The Time Travellers Bookshop is at Worldwidebookshop.com
Posted by Roger Derham at Monday, August 09, 2010