London’s Domination of Foreign Exchange Markets: A Question of Luck, Legerdemain or Longitude? 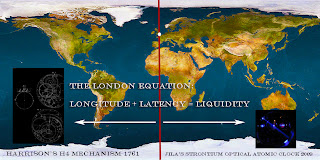 According to the Bank for International Settlements Triennial Report in April 2010 world global foreign exchange markets had a daily turnover $4.0 trillion up from $3.3 trillion in April 2007. Of this market cross-border trading accounted for 65% and local 35%. Banks located in the United Kingdom accounted for 36.7%, against 34.6% in 2007, of all foreign exchange market turnover, followed by the United States (18%), Japan (6%), Singapore (5%), Switzerland (5%), Hong Kong SAR (5%) and Australia (4%).
Is this dominance by UK banks of this extremely lucrative activity a question of luck, legerdemain or longitude?
Light Railways and Meridians
Ten years ago while researching the relationship between the English Admiralty and Algiers as background material for my first book, The Simurgh and the Nightingale, I spent a productive couple of days, courtesy of the very obliging and knowledgeable staff, in the Library of the National Maritime Museum in Greenwich, London. Every morning I would get on the Docklands Light Railway at the Bank Underground Station (about 10am when the rush was over) and then, as the track emerged into the light, move to the very front to enjoy the panorama as the train left behind the staid ‘old City’ to meander through the rapidly developing financial and commercial fantasia of the ‘new City’ in Canary Wharf.
Alighting at the Island Gardens station on the northern side of the Thames I would then walk to the glass-domed ‘beehive’ building housing the spiral stairwell that brought you down to the Greenwich Foot Tunnel (opened in 1902). Ambling under the Thames to emerge again on the southern side close to the – then intact – tea-clipper Cutty Sark it was only a short walk to the precincts of the museum.
Truth be told it was quite an unanticipated and wonderfully magical daily journey, good weather, unexpected panoramas, and the daily sensation of travelling through history and in particular the history of time and the world of commerce.
Looking north from Observatory Hill, Greenwich towards Canary Wharf
The Caird Library (named after the Maritime Museum’s original benefactor Sir James Caird) is part of an extensive complex that also includes the Royal Observatory and Flamsteed House where John Harrison’s marine chronometers are currently housed. I took the opportunity to visit both on a number of occasions and afterwards would sit munching a sandwich, smoking my pipe, re-reading Dava Sobel’s book Longitude about John Harrison and staring across the Thames at the skyscrapers and cranes. It was hard to escape the realization as to how important having the Prime Meridian at Greenwich was for the commercial activities of London… past and present.
The Meridian and Universal Time
In the pre-electronic age the accuracy of navigation depended on knowing how far one had sailed from a fixed point to another. Hipparchus of Rhodes (c. 167-127 BCE), had marked off the earth's surface at the equator into 360 parts – the degrees. The original prime meridian, as a way of assigning a zero longitude to the grid was placed by Marinus of Tyre at the then furthermost known westerly point in Europe, the Fortunate or Canary Islands off the western coast of Africa, in 114 CE. Ptolemy was to incorporate this prime meridian in his long influential projections where he divided the remaining meridians of longitude into minutes and seconds of arc forming a very accurate location grid. Each 15° interval represents one hour of the 24 hours taken by one full rotation of the earth on its axis. Later the prime meridian was specifically located to the small Canary island of El Hierro or Isle de Ferro. As late as 1634 France in its mapmaking confirmed this meridian although would also incorporate the Paris Meridian as well on the maps. 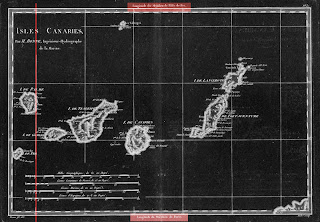 There were however other competing prime meridians, such as those centered on Copenhagen and Antwerp but the reality for commerce at sea was that after the establishment of the English Royal Observatory in 1674, and the work of Harrison in 1750’s to develop an accurate sea chronometer, the meridian at Greenwich became the reference zero longitude for most maritime commerce. By 1825 every Royal Navy ship was equipped with a chronometer. By 1880 65% of the world’s commercial maritime fleets were using Greenwich, 10% were using the Paris meridian, and the remaining 25% using ten other different meridian lines. Because of this confusion a conference was called, at the instigation of the United States, and following an earlier conference in Rome, to settle once and for all an agreed-upon meridian.
On October 1, 1884 the delegates to the International Meridian Conference, assembled in Washington “for the purpose of fixing upon a meridian proper to be employed as a common zero of longitude and standard of time-reckoning throughout the globe”, and Admiral C. R. P. Rodgers of the United States, was elected President of the Conference. In his introductory remarks Rodgers outlined the objectives of obtaining an agreed-upon designation for the Prime Meridian:
“Happy shall we be, if, throwing aside national preferences and inclinations, we seek only the common good of mankind, and gain for science and for commerce a prime meridian acceptable to all countries, and secured with the least possible inconvenience.”
Despite tremendous and highly technical efforts by the French delegation to secure the prime meridian for Paris the majority of the delegates (including Hawaii which at that stage was still an independent kingdom) opted for Greenwich. On October 22, 1884 the Final Act of the Conference published seven Resolutions.
I.
"That it is the opinion of this Congress that it is desirable to adopt a single prime meridian for all nations, in place of the multiplicity of initial meridians which now exist."
II.
"That the Conference proposes to the Governments here represented the adoption of the meridian passing through the centre of the transit instrument at the Observatory of Greenwich as the initial meridian for longitude."
III.
"That from this meridian longitude shall be counted in two directions up to 180 degrees, east longitude being plus and west longitude minus."
IV.
"That the Conference proposes the adoption of a universal day for all purposes for which it may be found convenient, and which shall not interfere with the use of local or other standard time where desirable."
V.
"That this universal day is to be a mean solar day; is to begin for all the world at the moment of mean midnight of the initial meridian, coinciding with the beginning of the civil day and date of that meridian; and is to be counted from zero up to twenty-four hours."
VI.
"That the Conference expresses the hope that as soon as may be practicable the astronomical and nautical days will be arranged everywhere to begin at mean midnight."
VII.
"That the Conference expresses the hope that the technical studies designed to regulate and extend the application of the decimal system to the division of angular space and of time shall be resumed, so as to permit the extension of this application to all cases in which it presents real advantages."
The Resolutions were then ratified on November 1. The only change between their publication and ratification was that the delegate from Turkey, the only Islamic country represented at the Conference and who had originally voted in the affirmative for Resolution V (the beginning of the universal day to be at midnight), wanted it recorded that he was in fact voting against the Resolution. The Islamic day begins with the setting of the sun not the rising. 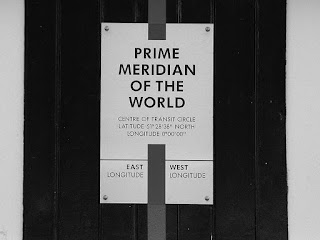 The London Equation: Longitude + Latency = Liquidity and Leverage.
The real importance of the 1884 decision (Resolution V) for London’s modern foreign exchange prosperity was that the Greenwich meridian was linked to the Universal Day. Initially Greenwich Mean Time (GMT) was used but could refer either to an astronomical day starting at noon or a civil day starting at midnight. In 1928 Universal Time (UT0) was introduced and further refined by Coordinated Universal Time (UTC) in 1972.
Foreign exchange markets are a decentralised fluid financial interface for the trading of currencies. Ethically they exist to assist international trade and business but in reality have become the most lucrative trading “Poker Game” with both buyers and sellers gambling on small percentage profit-generating movements on huge amounts of electronically transferred money.
Electronic trading (and profits) depends on both timing and quantity and increasingly is becoming dependent on Alogithmic or computer-generated trading ‘gambles’ particularly in the high frequency trading environment that pertains in the currency exchange markets in different time zones across the world. 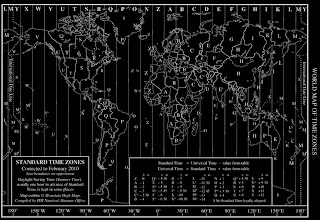 Algorithms are named after the great Persian mathematician Muḥammad ibn Mūsā al-Khwārizmī (780-85 C.E.)known by his Latin name of Algoitimi from the Latin translation of his book Algoritmi de numero Indorum (al-Khwārizmī on the Hindu Art of Reckoning). al-Khwārizmī introduced Indian mathematics to the west and particularly the concept of zero, the zero of both longitude and time.
Algorithmic trading bypasses human intervention to a great extent and depends on the software parameters designed into individual systems and timing and latency. All computers run on sets of programmable instructions called executables. In a foreign exchange transaction the latency is the delay between the algorithmic executable instruction commanding the transaction and the market actually responding by confirming the trade. The delay, if there has been even a minute shift in exchange rates in that same period, can lose much of the projected profits.
Ultra-low latency is the real buzz word in foreign exchange ‘poker’ and without it a ‘player’ will not survive at the table. This is where London's longitude and the determination of Universal Time brings its advantage. Most electronic signal systems work on a fuzzy logic basis where approximation rather than absolute accuracy is accepted. In foreign currency trading the greater the time zone discrepancy from the reference point the greater the latency lag, the greater the possibility of  a less-than-optimal algorithmic trade generated by a computer.
Legerdemain
To me however, the exponential expansion of the foreign exchange trading appears to be a completely unregulated, latent, labile, and larcenous market, and will eventually destroy both itself and us. The world has previously seen stock market crashes based on equities imploding and most recently on the trading of 'sub-prime' property values. Foreign Exchange Markets and FOREX trading are not altruistic. It is absolute speculation and the biggest game of poker in town. Because many of the 'plays' now and most in the future will depend on algorithmic electronic calculation the potential for hackers, launderers, and larcenists is enormous. Pitting computer software programs against each other in an ‘no-parameter’ or even ‘uncontrollable’ game will eventually reach stalemate and the ‘sleight of hand’ involved to generate profit rather than assist development will strangle us. 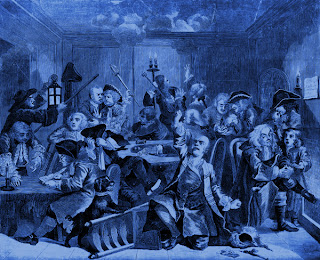