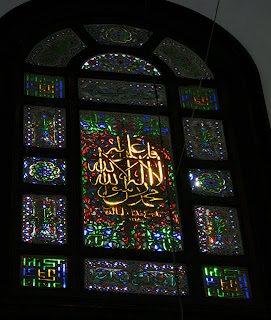 This rihla is about Damascus, Syria.

I travelled to Syria recently and while in Damascus went to the National Museum, hoping to see the remnants of one of the earliest polar-axis sundials ever made. This was a marble horizontal sundial constructed about 1350CE by the astronomer Ibn al‐Shāṭir which used to grace a plinth on the northern minaret, the Madhanat al-Arus or Tower of the Bride, of the Great Umayyad Mosque until it was shattered – I think: the guide books are a little vague on this – in the great earthquake that struck the city in 1759. 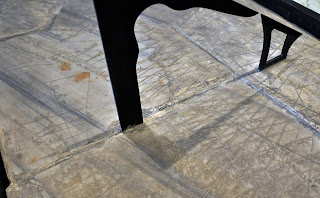 I was informed by my guidebook that the remnants were to be found in the garden of the museum but to my surprise it has been recently reassembled and mounted and is now on display on the second floor of the museum. The picture below shows the sundial and the faded lines of the astronomical projections carved into it by al-Shāṭir. 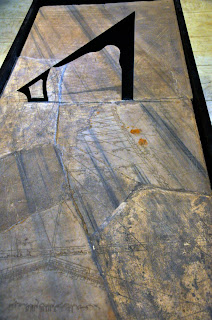 As an aside it is sometimes quite a sad and depressing experience walking around some of the regional and national museums that I have visited in middle-eastern cities like Damascus, Amman, Sana, Aleppo, Kars, Yerevan, Tabriz and Teheran. From the very fabric of the buildings there is often a sense of apathy or apologetic frustration for the necessity of their very existence. There is an implied apology to the visitor for the paucity of the displays and their contents which despite the millenniums of history and extensive archeological investigation of that history the museums contain only a bare modicum of the treasures that have been unearthed. The best of those finds have been extracted/plundered by the representatives of the colonial ‘Enlightenment’ powers and are now to be found in the museums of England, France, Germany and Russia or, as the result of the purchasing power, in the United States and Japan. You are acutely aware while wandering about that everything that there is to see is already on show. There is nothing in storage and the cupboard of historical record is bare. There is some hope however that in the absence of war any new archeological digs, such as the discovery of the Hittite temple in the citadel of Aleppo, will allow the treasures to remain in the countries of origin. The National Museum in Damascus has made a better attempt than most to make sense of that history. 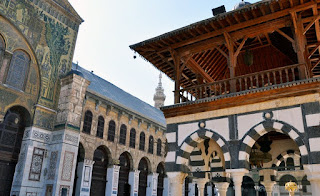 In very marked contrast the Great Mosque of the Umayyad Caliphate is a living, breathing, wonder. The site has been a place of human worship since 1000BCE when the semitic Aramaeans had their temple to Haddad, to be replaced later by the temenos of the Roman Temple of Jupiter, the Byzantine Cathedral of St John the Baptist and finally the Great Mosque begun by the Caliph al-Walid in 708CE.

As if I was a Shi’ite pilgrim I first approached the mosque from the east side along al-Qaimariye road. You come to the eastern gate, the Bab Jairun, where Zaynab bint Ali, Hussein ibn Ali’s sister and the Prophet Mohammed’s (PBHN) granddaughter was forced to stand, by the Caliph Yazid I, unveiled, for 72 hours after being brought to the city following the Battle of Kerbala in October 680CE. With her was Ali, Hussein’s son the future Imam Ali Zainul Abideen. Above and slightly to the north of the gate is the Mashad al-Hussein where tradition states Yazid I had Hussein’s decapitated head placed in a niche. Skirting around the southern and western walls I entered the mosque complex through the tourist gate on the north-western corner. 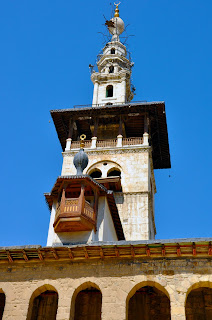 The northern minaret
–Madhanat al-Arus or Tower of the Bride –
of Great Mosque, Damascus, Syria.

After removing my shoes and first visiting the small but beautiful mausoleum of Saladin, I then entered the sahn or mosque courtyard through the Gate of the Confectioners. The impact of the very Byzantine – thought to be modeled on the basilica of St Simeon Stylitis north of Aleppo and built in 480CE – basilica mosque with its glittering external mosaic decoration and enclosure is tremendous. Walking to stand near the canopied ablution fountain I then turned to look back up at the northern minaret, the Madhanat al-Arus or Tower of the Bride. The tower is named as such for a bride of a caliph who as part of a wedding gift donated lead to cover the roof of the minaret. The lower part of this minaret is still in its original form; the middle part was an Ayyubid addition built after the fire of 1174.

It was here that Ibn al‐Shāṭir, the head muwaqqit or religious timekeeper in Damascus had placed his horizontal sundial on a plinth that extended out from the southern face of the minaret. The polar axial orientation of the dial allowed, for the first time, an equal division and accurate indication of hours. The picture above shows the plinth to be still in place but now has a 19th century replica replacement of the earthquake shattered original. 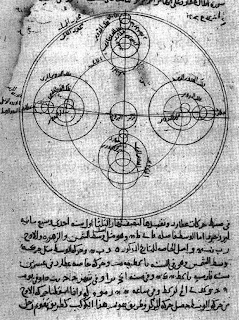 Al-Shatir's projections for the appearances of Mercury

More wonderful yet is that when you focus in on the archways where an observer would stand you can see that the masons have designed and constructed the blockwork to almost imitate Ibn al‐Shāṭir's astronomical projections. 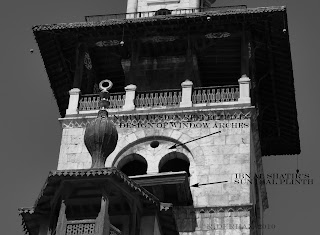 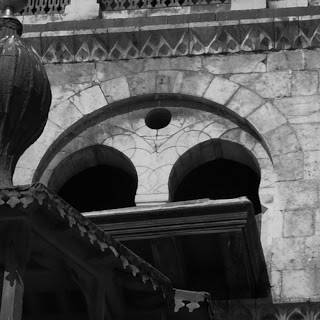 The builder-Caliph al-Walid bin Abd al-Malik addressed the citizens of Damascus after the opening of the mosque:

'Inhabitants of Damascus, four things give you marked superiority over the rest of the world: your climate, your water, your fruits and your baths. To these I wanted to add a fifth: this mosque.' 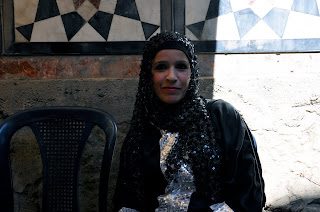 I would add a sixth: surprise.

Syria is full of them. It is a secular society where religions and attitudes mix with respect and co-operation. Where mosques and off-licences co-exist. Where the people are polite, helpful when asked, intelligent and fun-loving. There is very little sense of a military suffocation or of over-bearing policing. In essence it is like Ibn al‐Shāṭir’s sundial, a country – al-Sham – where the axis is, I believe, aligned to a faith in ultimate goodness, a better future, and an equal division of attainment. 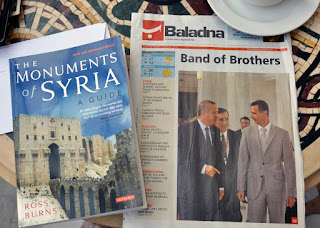